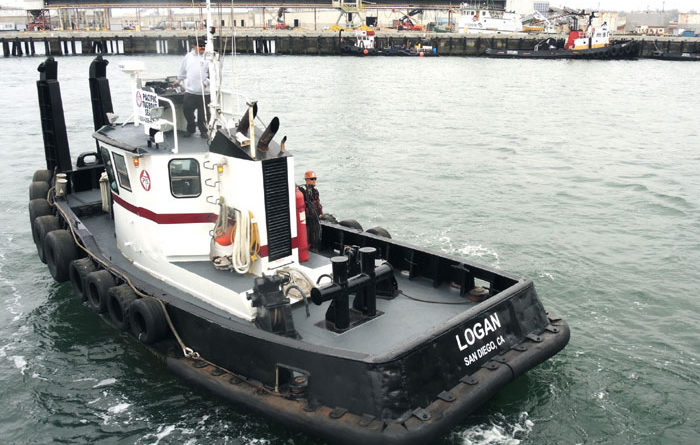 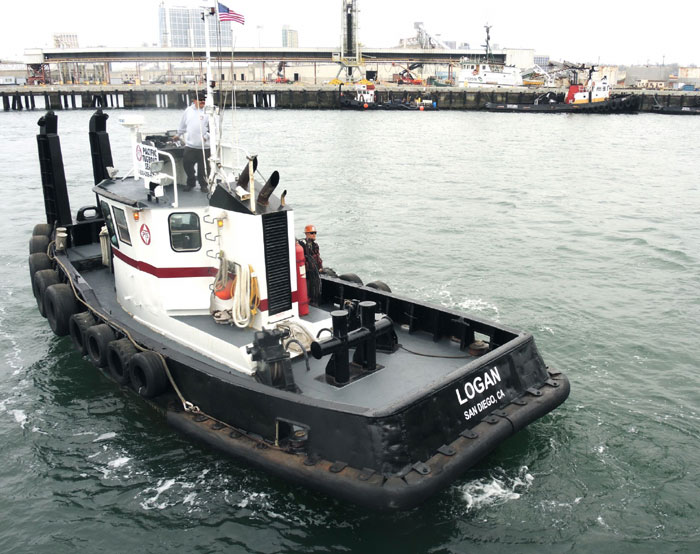 SAN DIEGO — When Pacific Tugboat Service asked students from Logan and Perkins Elementary schools to submit their name choices for a tug, many were on the same wavelength: Logan.

The name Logan was unveiled as the grand-prize-winning entry in Pacific Tugboat Service’s “Name that Tug” contest, May 17. Seventy-one fourth graders participated in the contest, and the tug’s new name was revealed on live television.

The fourth graders, along with their teachers and principals, were on the pier and on a “floating classroom” boat provided by Pacific Tugboat Service when the tug’s new name was unveiled. San Diego Harbor Police boat sirens and water cannons helped welcome the new name.

The newly named vessel on San Diego Bay is a member of the more than 20-tug fleet that services the bay’s working waterfront.

“The winning name Logan is immediately recognizable to locals,” said Pacific Tugboat Service vice president and principal Stephen Frailey. “Logan will act as a community ambassador as the tug travels on San Diego Bay and along the coast of Southern California.”

Designed by Pacific Tugboat Service, a member of the port’s Green Business Network, the contest was intended to help strengthen the ties between businesses and families in the Barrio Logan community, Frailey said.

“As a locally owned and operated maritime business, Pacific Tugboat Service shares a strong sense of pride in the culture and diversity of Barrio Logan,” Frailey said. “This project was a way to honor that heritage.”

Frailey worked with Port of San Diego staff to reach out to fourth graders at Logan Elementary and Perkins Elementary. The schools’ students, principals and teachers responded enthusiastically to the company’s proposed contest that also included a teaching element.

Before nominating a name, participating fourth graders were taught what a tugboat does and learned that the vessels were designed in San Diego — close to home. The informative aspect of what, where and how tugboats are used was an important component to the contest, Frailey explained.

“Maritime commerce has always existed in the area, but recent generations are not as aware of the Port of San Diego’s Working Waterfront career opportunities, and jobs that support national defense, international trade, construction, recreation, tourism, entertainment and other vital economic benefits,” Frailey said.

Close to 80 names were submitted to a panel of judges, who based their vote on originality, sincerity and relevance. In the end, Logan was proposed more than any other name and reflected the sense of community spirit that Pacific Tugboat Service was looking for.

Logan also is a connection to the past and ties to the present, Frailey said.

“All of the fourth graders in both schools will know that they helped put the name Logan on a hard-working, good-looking, powerful little vessel that does some big things,” he said.

The contest was part of the port’s 50th anniversary celebration and helped kick off the port’s Working Waterfront Weekend, which featured various family and educational activities.