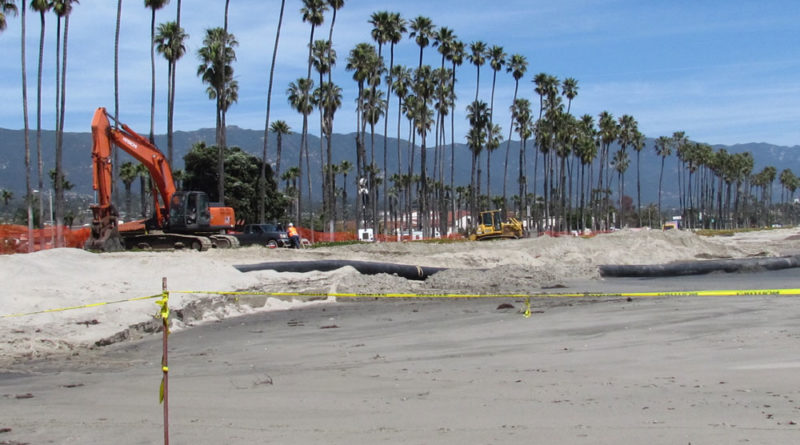 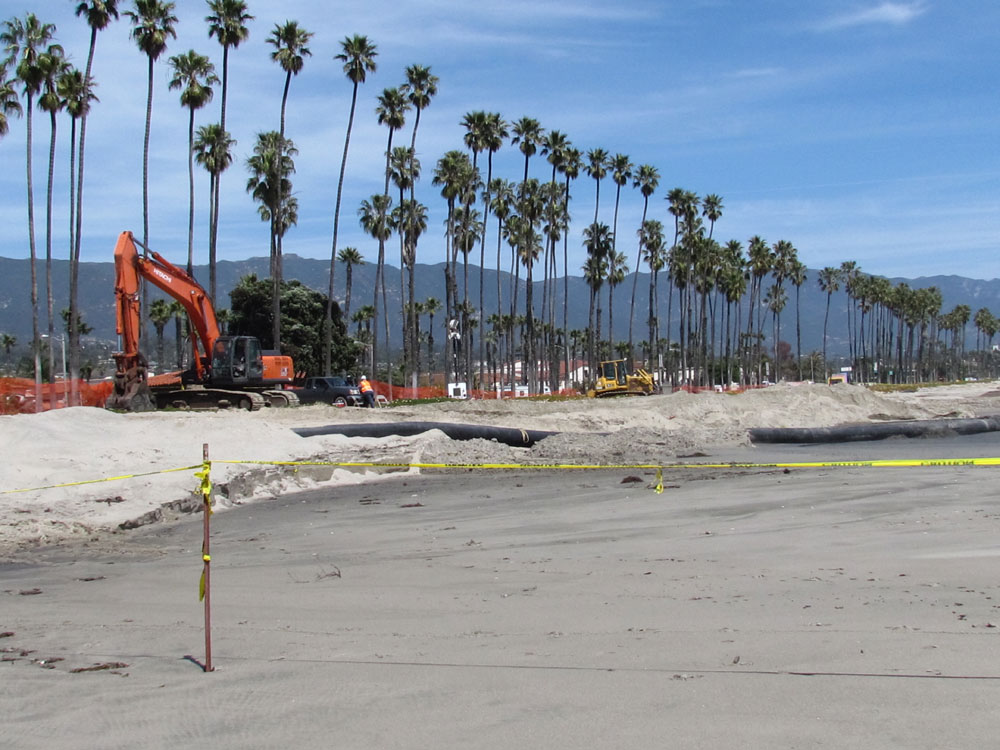 NEWPORT BEACH — Beaches, like most coastal components, are temporary features. The tiny sand grains enveloping the surfaces of the waterfront ebb and flow with the changing of sea levels.

“Sand is dynamic,” Miller said. “It flows back and forth in the cell, and the cell is the harbor.”

Erosion typically occurs when the beach can’t maintain the loss of sand to the sea, and barriers like seawalls, jetties and revetments often allow the sea to carry sand into the ocean. So when beaches are starving for the tiny morsels, ongoing projects requiring dredging typically are a godsend for such malnourished areas.

With Newport Beach Harbor’s Marina Park still about two years away from completion, a scheduled effort to dredge the basin has been viewed as a win-win situation for multiple areas.

“We’ve spent the past four months building the seawall and driving big sheets—35 feet—of concrete, creating the basin,” Miller said at a Harbor Commission meeting. “They’re excavating the material right now for the basin. They started exporting sand via truck to the Newport Pier area. So if you walk down there you’ll see sand around the entire area.”

To prepare the future site of a 23-slip marina located off Balboa Boulevard on the Balboa Peninsula, prime contractor Dutra Dredging Co. recently began dredging to a depth of minus 10.

Miller said Dutra, which is moving about four scows per day, will continue dredging until the end of August in what he calls a “pretty short operation.” The dredging foreman is familiar with the harbor, having coordinated efforts for recent dredging projects in the Upper Bay.

“The entire site is now under full construction mode,” Miller said. “Every square inch of that site there’s something moving.”

The project will include a 23,832-square-foot multi-purpose community and sailing program building; a 5,500-square-foot Girl Scout building; a new visitor-serving marina and a 200-foot-long side tie area. The marina is scheduled for completion in spring of 2016.

But the more recent reward of the projects’ momentum, Miller said, is the ability to place about 10,000 cubic yards of sand on the beaches near the construction site.

“Whenever you dredge, it’s always dark material,” he said. “It’s never nice, clean sand like you would want. But rest assured that that dark material does bleach out. It’s anaerobic and it hasn’t seen oxygen in a long time.”

In late July, workers delivered 5,000 cubic yards of sand to China Cove, which is about 4,000 cubic yards more of sand deposit than the area usually receives. Sand, in the form of 9,000 cubic yards, was also spread out in front of the lifeguard headquarters, adjacent to the Newport Pier and the near shore zone of the ocean.

But Newport Beach Harbor isn’t the only area redistributing these beige granules.

“We refer to the two different dredging episodes as the fall cycle and the spring cycle,” Treiberg said. “Each cycle averages about 150,000 cubic yards, so annual sand replenishment is on the order of about 300,000 cubic yards.”

To the south, areas like Port Hueneme recently received emergency shore protection to help mitigate the diminishing beach, where sand has moved at a rate of about 100,000 cubic yards a month. For decades, the area has been aided by the Channel Islands Harbor sand trap.

In the 1950s, Port Hueneme and the naval base to the south were rapidly losing sand, failing to receive the typical flow from the north. In response, officials created the sand trap to hold the sand and pump it a relatively short distance down to Port Hueneme beach.

But the amount of grains has declined drastically throughout the passing year.

“We have a sand trap that was built specifically for the replenishment of those beaches,” said Lyn Kreiger, Channel Islands Harbor director. “We’re having a much bigger project this year because like everyone else, we’ve worked like crazy to get some money because our sand trap is overflowed and the beaches are in very bad shape.”

In Long Beach, three separate phases of a beach peninsula sand perm project were instituted to stabilize and protect the local beaches. The berms were installed to minimize the abrupt sand loss due to high tides, giving residents a drier beach.

Back in Santa Barbara, the next dredging cycle hits in November, and Treiberg said the discharge site will take place anywhere along the beach in two locations — one opposite Calle Cesar Chavez and the other opposite Cabrillo Ball Field.

In early March, Santa Barbara endured a big storm which caused quite a bit of beach erosion. With the first dredge of the year shortly following, the sand was replenished and the area naturally recovered, Treiberg said.

“As long as the Corps continues to dredge on the regular twice a year on the program then we seem to do just fine,” he said. “Every large storm or swell kind of erodes all of the beaches in Southern California. But they tend to recover over the summer.”