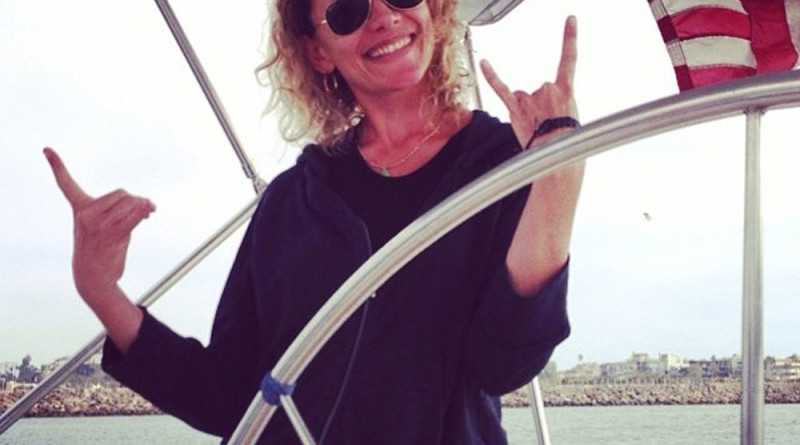 LOS ANGELES — The years spent sailing around the world left a lasting imprint on Sarah Dashew, who pulls from the various sounds and cultural influences she experienced when writing her music. The Los Angeles resident, singer and songwriter recently released her album, “Roll Like a Wheel.”

“The water is very much a part of my life and infiltrates my music,” she said.

“I was a child of the water; I was my father’s daughter. I could steer, I could sail, I could swim. And when the wind dropped he’d climb up the deck to the top and said jump now, let’s jump now, jump in,” are the first lines of Dashew’s song, “Fathers and Daughters” off her new album.

The story is telling of the time Dashew spent during her formative years sailing aboard her father’s Columbia 50 racing sloop, Intermezzo. For seven years she and her family sailed the Pacific Coconut Milk Run, navigating from Mexico to the Marquesas in eastern French Polynesia, heading to America Samoa, Tonga, Fiji and spent several months in New Zealand during hurricane season before continuing on their journey. In Cape Town, South Africa, her father had a new boat built for the family.

Tying up in a new country meant opportunities to explore the region and often ended in locals coming back to the boat to play music.

“We didn’t have a TV so we always listened to music,” she said. “We always had a tambourine and shaker on board. In New Guinea or Indonesia wherever we went there were always locals who would come out and say hi and greet you and there would be close to 15 people on board jamming.”

The kids joined in the unplanned sessions with recorders, shakers, kazoos or pounded on containers for makeshift drums. Anything and everything was transformed into an instrument.

It was during this life-changing sail and these jam sessions that Dashew found her love of music and the eclectic mix of musical sounds, instruments and harmonies discovered at each stop.

“I discovered a love for five-part harmonies and island rhythms,” she said.

But there were other influencers as well, she said, recalling all the songs by Janis Joplin, James Taylor and Chuck Berry they listened to while at sea.

These influences can be heard on Dashew’s three critically-praised albums.

The new album is Texas tejano, Southern gospel and blue-eyed soul with a distinct L.A. flavor. Tracks on the album such as “Estas Son Las Cosas” pay homage to the eastside of L.A. and features mariachi horns and Spanish–sung verses, according to a press release.

But those days and nights at sea still stick with Dashew.

Dashew grew up in a sailing with her father, Steve, constructing catamarans in his backyard as a teenager, and later designed the well known Deerfoot and Sundeer series of yachts. She apprenticed with her father boat building while out of college before taking off on her own sail with a college friend. They traveled up the Sea of Cortez before Dashew took a trip to Austin, Texas where she found the music scene and decided to sell the boat to her friend and launch her musical career.

Dashew works with her father in his boat building company, Dashew Offshore, when she is not working on her music.

“We still very much have that connection,” she said. “We still have my grandfather’s boat in Marina del Rey and continue to sail. My folks are also building a boat.”

When she does travel by boat, Dashew enjoys heading to Catalina Island which is “like a step back in time.”

Her years spent cruising on the open ocean hold special memories for Dashew and gave her a vivid outlook on life.

“I spent my formative years understanding there is more than one way to do things in life; seeing how different people in remote places do things and understanding it all comes down to human connection,” she said. “So I learned I don’t always have to pay attention to the rules that there is always an option and something to explore.”

Something she continues to do with her music.

Dashew will perform on March 2 at The Mint in Hollywood.