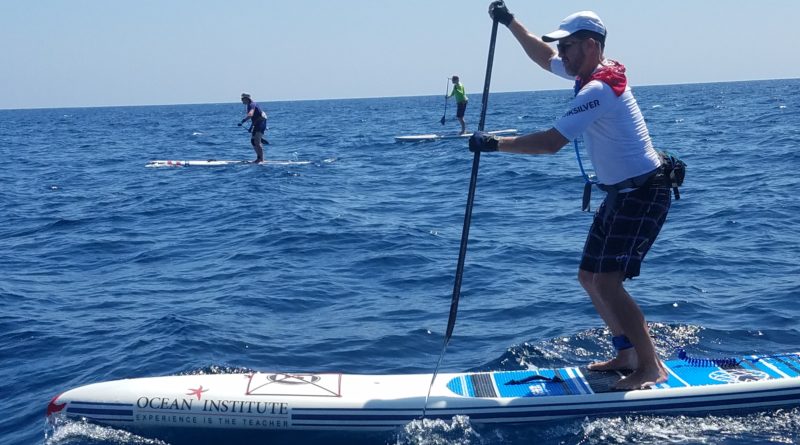 Three men paddled from Avalon to Dana Point in the hopes of achieving a $25,000 goal.

DANA POINT ― Three men have raised more than $15,000, so far, for Ocean Institute in Dana Point with a paddle fundraiser. The three of them completed a 39.9-mile open ocean paddle on standup paddleboards from Avalon to Dana Point, Aug. 18. The goal is to raise $25,000.

Ron Hoffmeyer, 56, Dr. Jeff Hughes, 55, and Hughes’ 25-year-old son, Austin Hughes, decided to paddle from Avalon to Dana Point after the former two had a discussion about professional and personal goals. The discussion evolved into pursuing a fitness plan for a good cause.

A decision transpired to challenge themselves physically while raising money for charity.

The trio created a GoFundMe account to fundraise for Ocean Institute, a non-profit organization providing educational programs regarding the aquatic environment, ocean species and maritime history for students of all ages.

They were not out to race or set any records, Hoffmeyer told The Log. Instead the trio wanted to motivate themselves to get in good physical condition while raising money for Ocean Institute’s general fund and collecting data for Scripps on ocean trends. 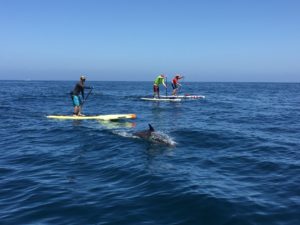 Hoffmeyer said they paddled a total of 335 miles during their 14 weeks of training before crossing the Catalina Channel.

They observed a pod of dolphins surrounding them, a sea turtle, jelly fish, and a whale in the local waters on one eventful day of training. They witnessed a hammerhead shark on another day.

Hoffmeyer and the Hughes’ departed Avalon on Aug. 18 at 5:10 a.m. Paddling in the dark in the early morning hours was something new to them. Pat Hilliger, an avid boater, and Hoffmeyer’s wife were on a chase boat with Dr. Hughes’ full medica 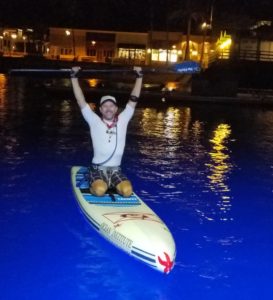 l kit on board. The three men began a slow paddle following the only thing they could really see, the lights on the boat.

They expected a tailwind from checking weather reports, but instead dealt with 1-3-mph winds in their faces for the first 15 miles.

The rest of the paddle was uneventful, according to Hoffmeyer. They did, however, see flying fish off Laguna Beach.

The men arrived in Dana Point where family and friends welcomed and congratulated them 11 hours and 9 minutes after their start. Their personal goal was to finish in 11 hours.

“I anticipate we will do something again, but just haven’t figured out what it might be,” Hoffmeyer answered when asked if there are any other fundraising events planned.

Hoffmeyer is a Dana Point resident and a volunteer teacher at the Ocean Institute. Teaching for the past several years and now raising funds for the organization satisfies a need in Hoffmeyer. Educating children from kindergarten to fourth grade about the ocean, inspiring the younger generation to give back to the environment and seeing the children’s eyes light up from being exposed to sea life are the reasons Hoffmeyer volunteers and fundraises for this organization.

More information about the Ocean Institute and ways to give (such as adopt-a-class) are available online at ocean-institute.org. The GoFundMe page to help reach the paddlers’ fundraising goal is gofundme.com/catalinatodanapoint.