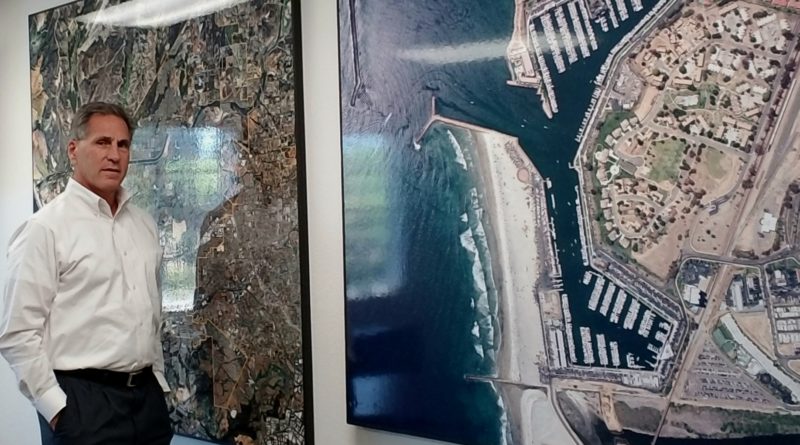 OCEANSIDE — Ted Schiafone has replaced his predecessor Paul Lawrence as the new harbor manager at Oceanside Harbor. While he warms up to his new position, he is reading an enormous amount of studies and documents and asking his staff as many questions as possible. “I have made it a priority to walk all of the docks and have tried to meet many of the businesses that operate at the harbor,” Schiafone told The Log.
A “Floridian for decades,” Schiafone and his wife bought a second home in Canyon Lake in 2012 and began frequenting the beaches in Oceanside.

“We have been coming to the Oceanside beaches for some years,” Schiafone said. “When the opportunity for this position was first presented this past summer, my wife spotted it and made certain I applied. We made several trips from Florida to our home and visited Oceanside throughout the application process. I spoke with many harbor local residents and businesses and everyone had something great to say about the Harbor. Once I met the other city staff members, I knew this was the right opportunity for me.”
For the previous two years, Schiafone was the Harbor Director for Lake Park Harbor Marina. Prior to that endeavor, he owned a private full-service marina on the West Coast of Florida.

Of his major accomplishments, Schiafone said, “I am very proud of the operational efficiencies and financial controls I was able to implement in Lake Park during that short period of time. My biggest accomplishment was the conversion of my very old and tired full-service marina into the area’s finest dry-stack marina.”
For West Coast individuals, the East Coast may seem quite different. When asked if he has seen any major difference between the East and West Coast marinas, Schiafone said, “Yes and no.”

“Both coasts seem to operate in similar fashions and have similar maintenance issues. I will say that in Florida the average age of a vessel is probably around 10 to 15 years, while in California they seem to average 20 or more years old,” Schiafone told The Log. “Both Florida and California have similar protection agencies, however California places significant emphasis on protection of shoreline access. Unfortunately, Florida has allowed too much private ownership of shoreline resources that can limit citizen access to coastal waters.”
Where legacies and missions are concerned, Schiafone stated the larger picture is what he values most.

“Everyone comes to a marina for different reasons, whether it’s to sail, fish, dive, cruise or just relax,” Schiafone said. “I personally learned to sail at a very young age. It wasn’t until my teens that a good friend taught me to water ski. My passion for water skiing has continued even today. It provided me with the opportunity to work at Cypress Gardens and Sea World as a professional show skier while completing my MBA in Florida.”

“My point is that we are all here for different reasons; however, it’s our love for life on the water that brings us all together. I’m not so much concerned about my legacy as I am my obligation to ensure Oceanside Harbor is here for future generations to enjoy,” Schiafone continued.
Some of the issues that have been problematic over the years in Oceanside, such as the recent developments with pumpouts and the sea lions, are dilemmas that Schiafone is meticulously pulling sources on and learning. Schiafone is early in his position and wishes to continue educating himself more about the harbor and the people.

“I would never assume to know all of the issues and dynamics that make up harbor operations this early in my employment,” Schiafone said.
Schiafone is based in the Oceanside Harbor Department building, located at 1540 Harbor Drive in Oceanside; he can be reached via phone at 760-435-4029.