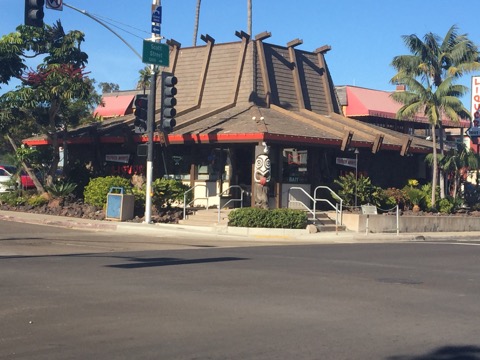 SAN DIEGO — After WWII, Polynesian and Hawaiian influences were one of the hippest cultural integrations around with an interest in “Tiki culture” that exploded onto the scene. Much of this began when military members from the WWII era came back from his or her deployment bringing stories from the South Pacific. Thinking back to the days of Don the Beachcomber’s, Trader Vic’s or Bali Hai’s initial beginnings, there was a fascination with the island life — and a whole array of delicious rum cocktails that were born from this fascination. Drinks such as the Mai Tai, Zombie, and Blue Hawaiian were all made popular back during the earlier half of the 20th century and still continue to be top Happy Hour choices today.  That’s where Trader Mort’s Liquor Store fits in to Shelter Island, a pocket of San Diego with a yacht or boating-related business on every corner.

Walking downtown, you’ll find the marinas, brokerage businesses, and yacht sales.  Only a stone’s throw — or a shot of rum — away you’ll find Trader Mort’s, which is impossible to miss with its original Polynesian design and a 10-foot carved wooden tiki statue, dubbed Mr. Tiki, out front.

“Back in 1964, Shelter Island had a heavy Polynesian influence. Many of the buildings were designed in that fashion,” Mike Stutz, the now owner of Trader Mort’s, said. Stutz’s family have owned Trader Mort’s since the 1975 and, of course, they have specialized in selling what Stutz calls “the sailor’s drink of choice” — rum.

Looking around the shop, there is a typical selection of alcohol, snacks and even a few Polynesian-themed souvenirs such as mugs. Rum noticeably seems to flow in abundance in the shop and a large selection of various rums line the walls as you enter the store.

Over the years, Trader Mort’s has even had a few celebrity regulars. Jerry Lewis was a regular who would stop in as he owned a yacht down in Shelter Island a while back. Another notable regular was Lou Gerlinger, the previous owner of The Log.

Perhaps the most notable element of Trader Mort’s is the iconic Mr. Tiki who guards the storefront. For anyone who has gone to Disneyland and seen the carved wooden tiki statues of The Enchanted Tiki Room, there might be an air of familiarity as Mr. Tiki stares at you, his comical features capturing your attention. Eli Hedley, the artist responsible for creating tiki artwork to display in Adventureland, also carved Mr. Tiki.

Considered the “Original Beachcomber,” Hedley along with his wife and daughters built his home in Royal Palms Beach in San Pedro, mainly out of driftwood. Drawn to the tiki culture design, Hedley was one of the major names in Hollywood architecture and décor from the 1940s through the 1970s. Hedley’s house no longer stands, but the site at 1799 W. Paseo Del Mar, San Pedro can still be visited today.

In a bit of dramatic history, back in 2001 Mr. Tiki was stolen causing quite the uproar in the community. Fortunately, Mr. Tiki was eventually returned — perhaps by the thief or someone who found him and took him back to Trader Mort’s —and left him in the parking lot.

A little piece of history, Stutz comments that they want to keep the shop the way it is and they don’t plan to change the outer appearance any time soon.

“Nothing has really changed,” Stutz said. “Some people say we should change it or upgrade it. We like keeping it old school and don’t have any plans to change.”

Trader Mort’s supports sailors and boaters, who make up a large portion of the community in Shelter Island. Stutz says they go the limits to provide good service to boaters, even offering a delivery service upon request.

In recent years, the tiki culture has declined some and it’s rare to see a completely original building still in the condition and build that captures the spirit of what it once was. There has even been some backlash that idealizing this type of design could be considered a type of cultural appropriation, which could be offensive to the indigenous people of the native Pacific South. However, it is a part of American history and one that in beach cities and even Disneyland’s Trader Sam’s, an homage to popular tiki bars of the time, is still being replicated today in admiration. And to have an establishment such as Trader Mort’s, which has been able to stand the tests of time, is somewhat of a treasure in San Diego.