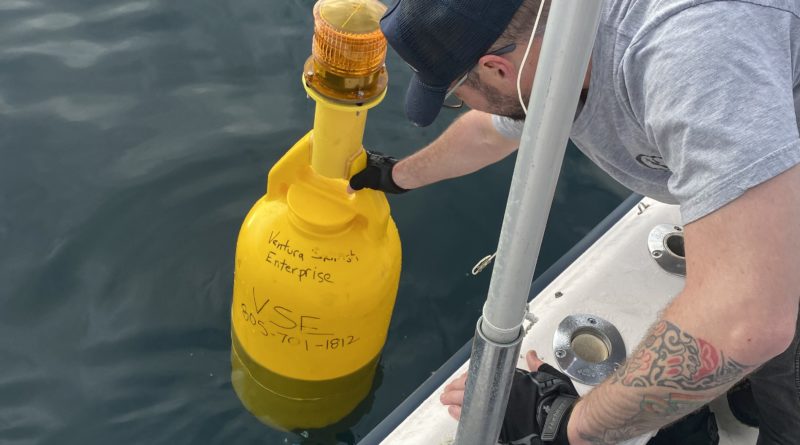 The step is required for VSE’s project to move forward. The project involves growing Mediterranean mussels via submerged long lines in twenty, 100-acre plots in federal waters near Ventura Harbor.

Ventura Port District General Manager Brian Pendleton said a total of five sentinel lines will be deployed in the proposed growing area, the first of which happened on Feb. 8. After all five are deployed, juvenile mussels will be attached for data collection and monthly lab testing at CMB to meet newly adopted federal data requirements aimed at ensuring the safety of shellfish grown and harvested for human consumption.

Meanwhile, the Ventura Port District, another partner in the project, has been working to get everything in order for the U.S. Army Corps of Engineers to review their permit application.

VSE submitted permit and project applications in October 2018 to the Corps and California Coastal Commission. Pendleton said the Corps needs two things to happen before they will process the application: a navigational risk assessment required by the U.S. Coast Guard and resolution to a jurisdictional boundary issue raised by the Ventura Local Agency Formation Commission (LAFCo). The boundary issue revolves around the district’s ability to get permits in federal waters.

“The District is working cooperatively with the LAFCo and is pursuing state legislation to resolve the matter,” Pendleton said.

Assembly member Monique Limón introduced Assembly Bill 2370 on Feb. 18 to resolve the dilemma. If passed, the bill would “authorize the Ventura Port District, to the extent permitted by federal law, to construct, maintain, operate, lease, and grant permits to others for the installation, maintenance, and operation of aquaculture plots in federal waters off the coast of California in order to aid in the development or improvement of navigation or commerce to the port district.”

Meanwhile, a staff report released on Feb. 28, recommended a firm to complete the navigational risk assessment required by the U.S. Coast Guard. The assessment will evaluate the level of potential risk of the proposed aquaculture project on commercial and recreational shipping; impact to vessel traffic patterns and traffic constraints; and identify potential mitigation measures that, if required, will reduce navigation risk associated with the aquaculture project. Pendleton estimated the assessment would be completed by the end of June.

To read more about VSE and their proposal visit thelog.com/local/ventura-harbor-navigates-waters-of-offshore-aquaculture-shellfish-farming/.