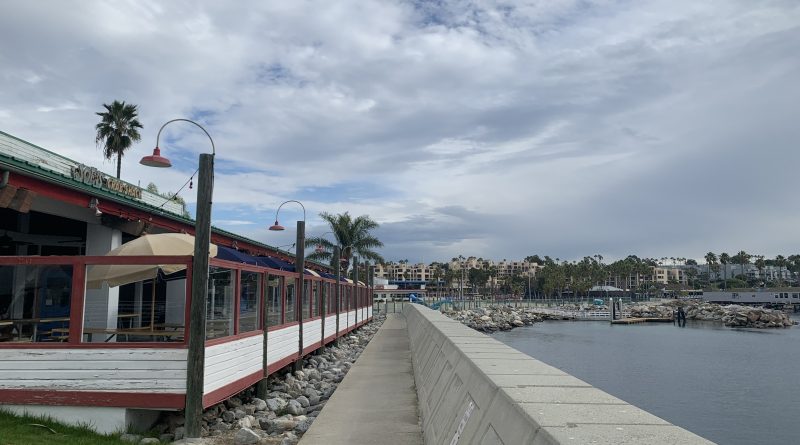 A feasibility study on installing a boat ramp at the Joe’s Crab Shack site in King Harbor is one of the top three six-month strategic plan recommendations from the Harbor Commission, but waterfront development remains at a standstill.

REDONDO BEACH—Efforts to bring a boat ramp to King Harbor have again spilled over into a new decade.

The Harbor Commission recently submitted a list of harbor projects for the City Council to include in their six-month strategic plan, which runs from Oct. 15, 2019 to April 15.

The top three items on the list were to direct staff to perform a detailed boat ramp design at the Joe’s Crab Shack site to be used for future workshops, resurrect the Mole B/Moonstone Park Plan and provide a suitable slip under the city’s control for the white sea bass grow out facility and include $50,000 in capital or grant funds in 2020 to construct the grow out pens.

Efforts to bring a boat launching ramp to King Harbor have been around for the past 60 years, according to King Harbor boating advocate Mark Hansen. King Harbor currently has no boat ramp just one functional boat hoist, which has limited hours and requires an operator. One of the major sticking points for the boat ramp has been the location, with a number of factors in play including safety, parking and traffic flow.

“There is no perfect place in our little tiny harbor that was put together piecemeal over the years for a boat ramp so we’re going to have to make concessions,” Harbor Commissioner Vicki Callahan said.

Many areas have been studied and considered, but the Harbor Commission has narrowed its support to Mole C, Mole D and the area in between the two as the best site for a boat ramp.

“When you examine the opinions of the retired Harbor Patrol, licensed captains and people who use the harbor all the time they are saying C, C and a half or D,” Callahan said. “You want to get it as close to the mouth of the harbor as possible to avoid accidents.”

The Coastal Commission has long encouraged a boat ramp in King Harbor, and in October 2018, the Coastal Commission amended Redondo Beach’s Local Coastal Plan (LCP) to include the development of the boat launch ramp, according to previous Log reporting. One of the major things holding the boat launching ramp from moving forward is the city’s litigation with CenterCal. Callahan and Harbor Commissioner Jim Light said it is unlikely the boat ramp or the Mole B/Moonstone Park plan will move forward until the lawsuit is resolved.

“The city has indicated they aren’t doing anything until the lawsuit’s settled,” Light said.

Redondo Beach remains embroiled in litigation with CenterCal over a 2017 agreement between the two parties that gave the company the rights to enter into a lease with the city and ultimately redevelop the waterfront. CenterCal’s plans were halted by Redondo Beach voters just a few months later with the approval of Measure C, which restricts waterfront development.

Light and Callahan expressed they are eager for the litigation to end so the waterfront can be looked at as a whole and a master plan can be crafted so various projects can be looked at together.

“That’s one of the problems, we’ve done everything by piecemeal in the harbor for so long,” Callahan said. “The dream, at least of the Harbor Commission, is to have something cohesive, a master plan where everything works together.”

Another project the commissioners think should be considered alongside the boat ramp is the Sportsfishing Pier. The Sportsfishing Pier was declared unsafe and closed in 2017. The City Council decided to replace the pier instead of repairing the damaged areas, but work has not yet begun. Light and Callahan said having a master plan would allow them to think about the harbor as a whole and where things would work best in relation to each other.

“Really thinking out the relationship between the Sportsfishing Pier and the boat ramp,” Hansen said. “What’s the best flow there?”

When the litigation between Redondo Beach and CenterCal will be resolved remains unclear. However, Light said there is hope it will be soon.

“It’s been said in public session by the council that they are trying to negotiate a settlement with CenterCal,” Light said.

Redondo Beach City Council member Todd Loewenstein did not comment on where the city is at on the litigation but said the boat launching ramp is a priority that won’t move forward until the litigation is resolved.

“While it’s a priority for us I would say that we’re not ready to launch a boat launch,” Loewenstein said.

He also noted rebuilding the Sportsfishing Pier is also a priority. Hansen said a promising sign the boat ramp could move forward is a recent decision by the City Council to approve paying $750,000 to the owners of Joe’s Crab Shack for the right to terminate their lease on 60 days notice. Loewenstein confirmed the information.

“That gives us a lot of flexibility if that’s where we decide to put it [the boat ramp],” Loewenstein said.

Joe’s Crab Shack is one of several proposed locations being looked for the boat launching ramp, but a location has not yet been decided.

Although CenterCal’s plan for redeveloping the waterfront has not moved forward, the harbor area did see a little revitalization progress on paper in 2019. In October, the city was granted $4.8 million in grants to purchase 15 acres of the 50-acre AES power plant to restore wetlands on the site and build a park.

Developer Leo Pustilnikov is in the process of purchasing the AES power plant, which was slated to close in December 2020. However, the California Public Utilities Commission in November 2019 voted to recommend the power plant should be allowed to keep operating through 2022. Pustilnikov has also purchased the former SEA Lab across the street.

It hasn’t been revealed yet what Pustilnikov plans to do with the sites.

One thought on “Will Redondo Beach’s King Harbor get a boat ramp in the next decade?”