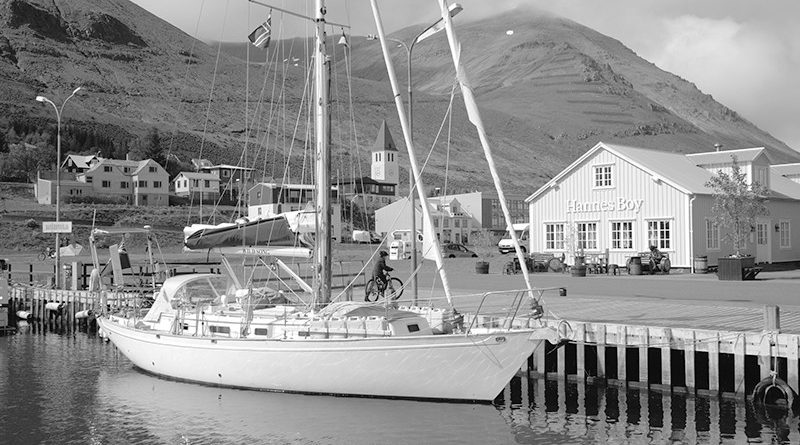 Curiosity often drives us to the most fascinating of places and on some of the grandest adventures.

For one man it drove him to the arctic waters of Iceland in a Victoria 38 sailboat in search of answers to satisfy his curiosity about the volcanic island to the north and to see some peculiar seabirds along the way.

Paul Heiny is a sailor and well-known broadcaster and writer out the United Kingdom who turns his sailing adventures into digestible novels for sailors and non-sailors alike. In his most recent book, “Farewell Mr. Puffin” Heiny documents his travels from the east coast of England to the crisp northern waters of Iceland and the lack of the peculiar puffin that is so native to colder northern waters.

Heiny began his journey in his coastal village on the east coast of England where he stumbled across a set of documents from the 12th and 13th centuries recording a trade route that saw roughly 150 boats running the coast of England up to Iceland and back each year.

“I thought crikey in the 1200s 1300s how the hell were they navigating and it suddenly came me it’s not that difficult,” said Heiny. “Because none of the hops, if you go from England to Scotland to the Orkney Islands to the Faroe Islands to Iceland,  none of the hops are more than 200 miles so you know you’re only 36, 46, 48, hours out of sight of land really. Because Orkney is very high, Scotland is very high, Faroes are very high, and Iceland is very high if you had a compass you would be hard-pressed to miss them. So, I thought that was very interesting and that is the route that I took. The route these 12th and 13th-century boats would have taken.”

Iceland is a Nordic island nation defined by its dramatic landscape that is littered with volcanoes, geysers, hot springs, and lava fields.

Located in the North Atlantic Ocean just outside of the Arctic Circle it is home to an estimated population of 400,000 and has become a bit of a tourist attraction in recent years with experts forecasting 700,000 tourists will visit the island by the end of 2021.

Heiny found it rather curious that the island had become such a tourist destination and drawn to colder climes and a desire for a new adventure packed up his sailboat to head north.

“There are two things that inspired the journey really,” said Heiny. “Iceland is a peculiar place as in over the last ten years or so there has been the most incredible tourist boom…So first I was just curious because from where I live on the east coast of England it is not a million miles to get to Iceland but I was very curious to see what all the fuss was about… The other reason I wanted to go is that if you are sailing from the south coast of England once you get to Lands End where Britain ends so to speak before you hit the Atlantic Ocean you have a choice to make you either turn left and that takes you south to warmer waters and eventually towards the equator. If you turn right you end up going to northern climes it is not all that far from there to the Arctic circle and I have always been drawn to the rather bleaker and somewhat colder places than I have to the hotspots.”

Heiny also found that he would draw inspiration from his fondness for the particularly strange and socially isolated puffin.

A peculiar bird, the puffin has a small black and white body with tightly packed feathers, allowing them to survive in colder climes and a colorful beak. The bird spends their winters at sea and only comes onto land to mate, where they meet up with their partner who they will keep their entire adult lives.

They are rather popular on the west coast of Europe and particularly in Iceland.

The puffin’s numbers have taken a dramatic decline inspiring Heiny to center his book partially on the puffin’s lifestyle and its connection to the sea.

Heiny made the journey south around Cape Horn a few years ago in an 18,000-mile journey, documented in his book “One Wild Song”, after making the trek south in the stifling heat he found the journey into crisper northern waters refreshing but not without its challenges.

“The technical aspect of sailing up in Iceland is that you have to be fairly self-sufficient in your boat,” said Heiny. “It is a highly civilized place but it doesn’t do yachts it doesn’t understand sailboats.”

With a lack of marinas and other amenities for cruising in Iceland, boaters need to have a sense of self-sufficiency.

Heiny did say that if a boater was having engine troubles they could probably find what they are looking for and someone to fix it but other than that you will need to do things on your own.

Heiny also recommends that sailors have good respect for the colder climate. Leaving Grimsey Island on the north coast Heiny and his crew were surprised when the wind shifted and they were hit with winds that carried an arctic chill.

“We thought well it is just a normal rather cool day back home,” said Heiny. “But after about an hour or so of this we felt like we were getting a deeper kind of cold somehow it got right through to our bones and we suddenly realized hang on a minute this could easily be the early stages of hypothermia.”

Heiny and his crew pulled into harbor quite late at night in the rain and although survived the wind chill they were reminded how easily they could have been caught on the wrong side.

Follow Heiny and his crew on their journey north in his book “Farewell Mr. Puffin.” The book has been declared a love letter to puffins and northern climes like Iceland with a good undertone of humor.

“There are several themes to this book on is the place themselves how event though they are separate islands quite a way a part they do have links,” said Heiney. “But what is really important in the sailing books that I write is that I am always very honest about what goes on.”