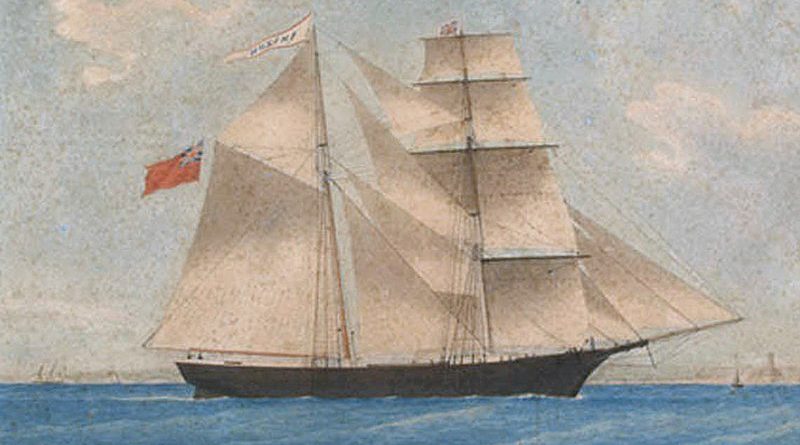 An investigation recorded in the 2007 documentary “The True Story of the Mary Celeste” was able to offer no definite conclusion but suggested that a faulty chronometer, rough seas, and a clogged onboard pump could have convinced Briggs to order the ship abandoned shortly after sighting land on Nov. 25, 1872. Wikimedia Commons image

The story of the Mary Celeste, an American-registered merchant brigantine, began on Nov. 7, 1872, when the 282-ton brigantine set sail from the New York Harbor traveling to Genoa, Italy. On board was the ship’s captain, Benjamin S. Briggs, his wife, Sarah, and their 2-year-old daughter, Sophia, along with eight crewmembers.

On Dec. 4, 1872, the ship was discovered adrift and deserted in the Atlantic Ocean 400 miles off the Azores Islands by the British brigantine Dei Gratia.

Besides several feet of water in the hold and a missing lifeboat, the ship was in seaworthy condition—the last entry in her log dated ten days before her discovery.

She was found well stocked with six months’ worth of provisions, her cargo of alcohol was intact, and the captain and crew’s personal belongings were undisturbed. However, no one on board was ever seen or heard from again.

Mary Celeste was built on Spencer’s Island, Nova Scotia, and launched under British registration as Amazon in 1861. She was transferred to American ownership and registered in 1868 when she acquired her new name after a series of mishaps, including her first captain’s sudden illness and death and a collision with another ship in the English Channel. After that, she sailed with little purpose until her 1872 voyage. Following her recovery, an investigation into whether to grant payment by its insurers to the Dei Gratia’s crew for salvaging the “ghost ship” found no evidence of foul play. The court’s officers considered various possibilities of foul play, including mutiny by Mary Celeste’s crew, piracy by the Dei Gratia crew or others, and conspiracy to carry out insurance or salvage fraud. No convincing evidence supported these theories, but unresolved suspicions led to a relatively low salvage award.

The inconclusive results from the hearings fostered continued speculation as to the nature of the mystery, and the story has repeatedly been confused by false detail and fantasy. For example, one of history’s most famous maritime mysteries unfolds the question: Why would a skilled captain such as Briggs, or his crew, abandon a fully stocked seaworthy ship? Evolving hypotheses over the years have ranged from mutiny and pirate attack to assault by a giant octopus or sea monster, while the more scientifically minded suggested an explosion caused by fumes from the 1,700 barrels of crude alcohol in the ship’s hold.

After the hearings, Mary Celeste continued service under new owners. However, in 1885, her captain intentionally wrecked her off the coast of Haiti in an effort to achieve insurance fraud.

The story of her 1872 abandonment has been recounted and dramatized in documentaries, novels, plays, and films. The name of the ship has become a byword for unexplained desertion. In 1884, Arthur Conan Doyle wrote “J. Habakuk Jephson’s Statement,” a short story based on the mystery, but spelled the vessel’s name as Marie Celeste. His story suggested that an ex-slave sought vengeance on the ship.