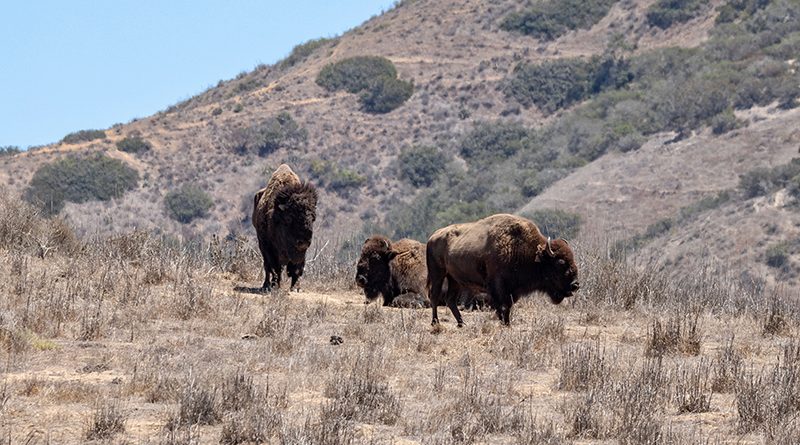 The most told tale about how the bison got to the island is that they were brought over for the filming of one of Zane Grey's feature films in 1924, either The Vanishing American or The Thundering Herd. Fifteen heads of bison were used to portray scenes of the American West. Shutterstock image

In addition, Catalina is also home to several endemic, introduced, and endangered species. Endemic species include the Catalina Island Fox, who were on the brink of extinction until the Catalina Island Conservancy brought the species back from the brink by establishing a captive breeding program using breeding pairs trapped in the wild, and a successful public awareness campaign.

The American bison is a non-native mammal that walks the island after a herd was introduced to the grounds in 1924. The bison were brought in to for the purpose of a film and remained on the island due to high cost to remove them.

The bald eagles that reside on Catalina are among the endangered species that the island hosts. According to the CDFW, although bald eagles were taken off the endangered species list, the remain endangered in California. After two decades without an eagle sighting on the island, the Conservancy first helped fund the Bald Eagle Restoration Program in 1980. A new generation of adult eagles began to lay their eggs in nests on Catalina in 1987, but the eggs all broke before hatching. The Institute for Wildlife Studies (IWS) biologists began helping the eagles by retrieving the fragile eggs, hatching them off-site in incubators, and returning healthy chicks to the nests. The parents then accepted them back and raised them. In 2007, DDT levels had finally decreased enough to allow bald eagles to hatch eggs in the wild successfully, and by 2009, all nests on Catalina were left to natural hatching and incubation. Because of the dedication of IWS and its staff, in cooperation with the Catalina Island Conservancy, Catalina-native bald eagles soar along the island’s cliffs once again.