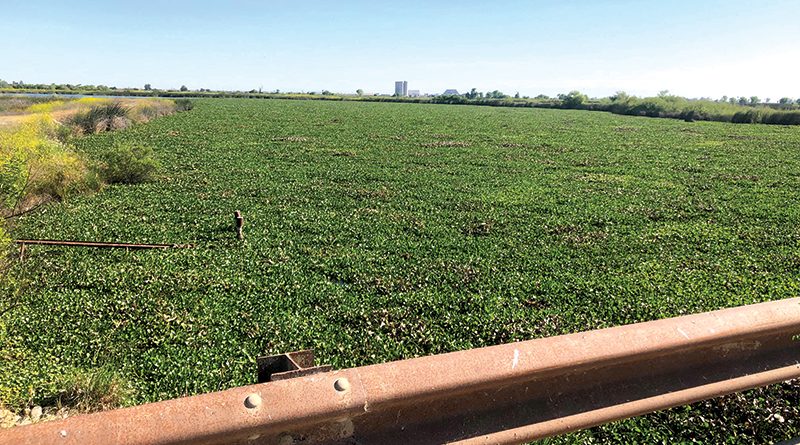 The restriction is for motorized boats with trailers and will continue through the end of waterfowl season.

FRESNO一 The California Department of Fish and Wildlife has temporarily restricted boat use in the Mendota Wildlife Area in Fresno County through Feb. 13.

The restriction is due to an overgrowth of water hyacinth, an invasive aquatic plant species native to the Amazon, that has taken over the pool.

“It has been an invasive nuisance weed in many areas for a long time,” said Steve Brueggemann, senior fish and wildlife habitat supervisor for the CDFW. “It just showed up in the Mendota Wildlife Area in 2019 and has exploded from no acres in the summer of 2019 to an estimated 165 acres within the wildlife area in the last two years.”

Water hyacinth forms in dense colonies creating mats that block out sunlight and can crowd out native species and entangle or impede vessels.

Brueggemann said that the plants have already changed the turbidity of the pool taking it from the natural almost chocolate milk-colored cloudiness that obscured the bottom of the pool to almost completely clear, which allows them to increase their reproduction.

“…I’ve been here for the last 30 years and the hyacinth has acted like a filtration system that basically cleans that water to where you can see the bottom of the pool in most places now,” said Brueggemann. “And that has really made the young plants, the seedlings which grow on the bottom, produce over a much larger area within the pool…Just the hyacinth being there has kind of increased the hyacinth’s ability to reproduce by clearing the water.”

Aside from the environmental factors, the plant impairs pumping operations and can tangle boat props and impede navigation. Brueggemann said they had a boat stuck in the pool just last year.

The restriction is on vessels using a trailer and will continue through the end of waterfowl season.

The restriction has been placed for two reasons, the plant impedes the boat’s ability to operate safely, and secondly, the plant is highly invasive and can spread to other bodies of water and can become stuck between the trailer and the boat and then the boater would unknowingly take the plant somewhere else.

“What we saw last year was they would load a boat onto a trailer and they would pinch a lot of the hyacinth between the boat and the trailer and carry it off,” said Brueggemann. “Which was concerning if you’re going to take that to other water bodies and introduce that plant you could have other issues arise in the lakes around here.”

According to Brueggemann, hyacinth has been a major problem in the delta and is concentrated in Stockton/Sacramento area. The Department of Boating and Waters Ways has been tasked with controlling the hyacinth in the area for the last couple of years.

The CDFW is partnering with the U.S. Bureau of Reclamation, San Luis Delta Mendota Water Authority, California State Parks’, and the Division of Boating and Waterways, and local irrigation districts to work on a long-term plan to control the water hyacinth within the Freson Slough.

Brueggemann said there are several options to removing or controlling the hyacinth but each has its own complications.

An herbicide or pesticide, importing an Amazon-native insect or fungus to naturally control the plant or flooding the plant out of the slough and into the ocean.

The CDFW has yet to decide how to proceed with controlling or removing the plant but in the meantime, they are asking boaters to pay attention and report sightings of the water hyacinth on the CDFW website at https://wildlife.ca.gov/Conservation/Invasives.

Kayaks are still allowed in the pool, but Brueggemann warns that access points to the pool have already been impeded by the plant.

For more information see the CDFW website at https://wildlife.ca.gov/.