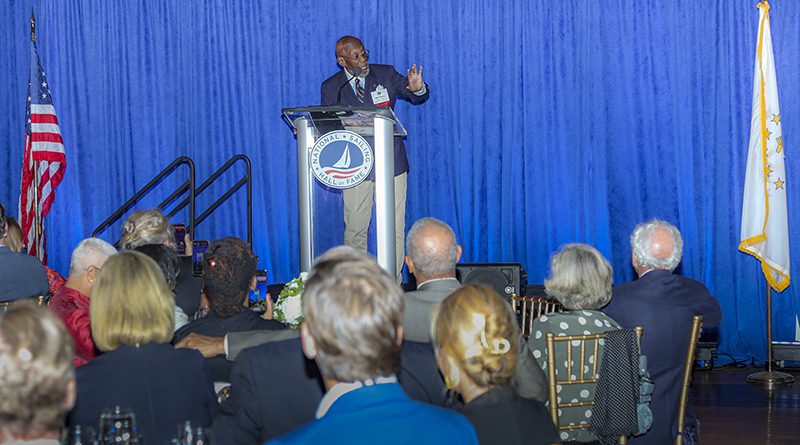 Bill Pinkney, Member of the Class of 2021, spent eight years in the US Navy until he took his yacht, a Valiant 47-foot sloop named “The Commitment” and sailed around the world. Image provided by Dan Forster.

NEWPORT, RI- The National Sailing Hall of Fame (NSHOF) has acknowledged eleven sailors composing its 11th class of inductees. The class of 2021 includes Alexander “Red” Bryan and Cortlandt “Bud” Heyniger – founders of Alcort, Inc. and designers and producers of the iconic Sunfish.

The Class of 2021 was formally celebrated on Oct. 16, 2021, with an Induction Ceremony in Newport, RI. The event was held in the newly renovated Armory Building, the former site of the international press corps during the 12 Metre America’s Cup era in Newport and the future home of The Sailing Museum, all according to https://www.sailingscuttlebutt.com/2021/10/14/class-of-2021-bill-pinkney/.

– Lynne Jewell Shore – one of the first women to win an Olympic gold medal in sailing, Rolex Yachtswoman of the Year, and former Executive Director of Sail Newport.

– Rear Admiral Stephen B. Luce – the founder of the U.S. Naval War College (1884) and leading educator on seamanship and training for the Navy.

– Jane Wiswell Pegel – a three-time Martini & Rossi, now Rolex, Yachtswoman of the Year, and winner of several National and North American Championships in sailing and iceboating.

– Dawn Riley – the first woman ever to manage an America’s Cup syndicate and the first American to sail in three America’s Cups and two Whitbread Round the World (now The Ocean Race) races.

– The Lifetime Achievement Award recipient for 2021 is Captain William D. “Bill” Pinkney, the first African American to solo-circumnavigate the world via the Capes.

Representatives of the Class of 2021 join 90 current Hall of Famers, all of whom will be highlighted in the Legends of Sailing exhibition at The Sailing Museum, which is scheduled to open in May of 2022. This year marks the eleventh year of annual induction to the National Sailing Hall of Fame.

For more on the NSHOF please visit https://nshof.org/.