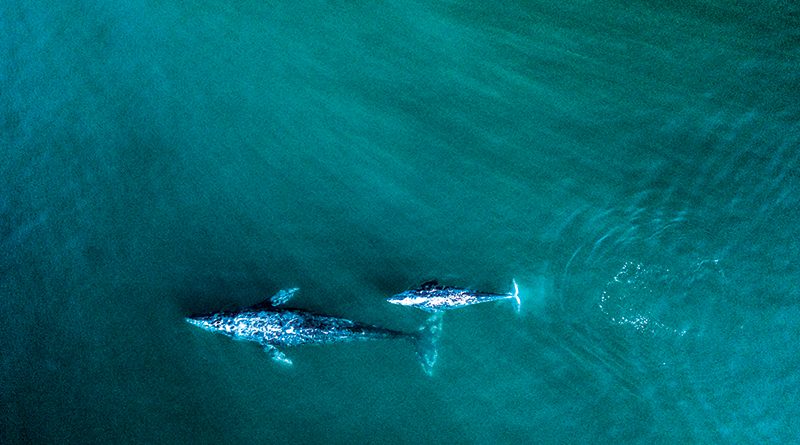 Thanks to a moratorium on whaling and other multinational protections, the eastern Pacific population of gray whales is thriving with around 26,000 individuals and a Red List status of Least Concern. Shutterstock image.

BAJA — The first spotted whales of the annual gray whale migration has begun to arrive in Baja, after accomplishing one of the longest migrations of any mammal. Gray whales travel 12,000 miles round-trip from their feeding grounds in the Arctic to calve and breed in the Baja lagoons and then back again.

Gray whales spend their summers feeding in the nutrient-rich waters of the Arctic, however sometimes whales are seen further south during summer, even in California.

In September, gray whales begin to leave their Arctic food bank, migrating south along the coastline to breed and calve in Baja. Gray whales travel at approximately five miles per hour and travel about 75 miles per day.

Adult females and males begin to arrive in the lagoons of Baja in December, although not all whales arrive at the same time. Whales continue to arrive in the Lagoon into late January. There are four lagoons in Baja where the whales populate: Guerrero Negro, Laguna Ojo de Liebre, Magdalena Bay, and Laguna San Ignacio.

January is the ideal time to see migrating gray whales along the California coast, with whales traveling northward and southward; January being the lagoons most populated period of time.

Pregnant females come to these lagoons to give birth in the sheltered, warm waters where they can nurse their calves and help them develop strength for the journey back north.

From February to late April, gray whales will leave Baja’s lagoons to migrate back north, another good opportunity to witness the migration. Female whales with newborn calves are the last to move on from the lagoons to give the calves as much time as possible to grow. These mother and calf pairs have a tendency to stay close to the coast throughout their migration and actively look to avoid predators, especially killer whales, and great white sharks.