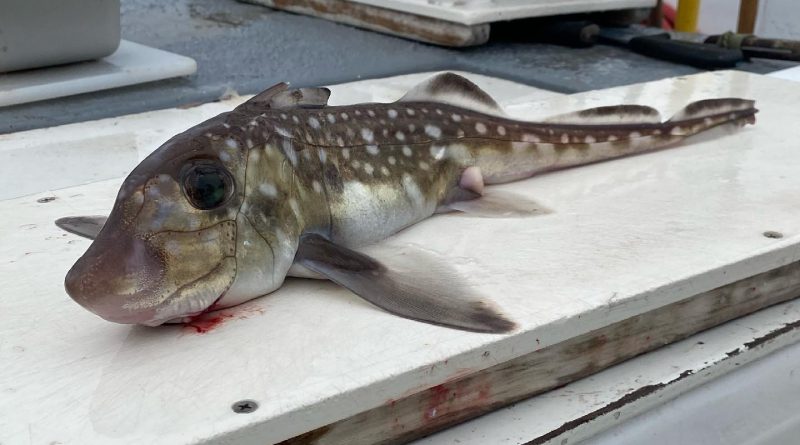 “These little suckers are always an interesting catch,” said a May 14 Facebook post from Dana Wharf Sportfishing. “The Spotted Ratfish is found in deeper water over rocky, muddy bottom. Their diet is primarily made up of small crabs, clams, and fish. They also have very large rat-like teeth and a dorsal spine capable of inflicting a fairly mild but still painful wound.”

The fish’s name comes from the white spots that cover its body and its pointed rat-like tail. The fish ranges from the panhandle of Alaska to South of Baja with a concentration between British Columbia and Southern California, according to Aquarium of the Pacific.

The fish is a chimera, a group of fish believed to have evolved from sharks 400 million years ago. It shares a few similarities with its modern counterparts but unlike sharks they don’t have sharp and replaceable teeth, instead, they have three pairs of large permanent grinding tooth plates.

They mainly feed on clams, crabs, shrimp, polychaete worms, and small fish, they hang around on the seafloor and prefer depths of around 2970-feet and waters around 45-degrees.