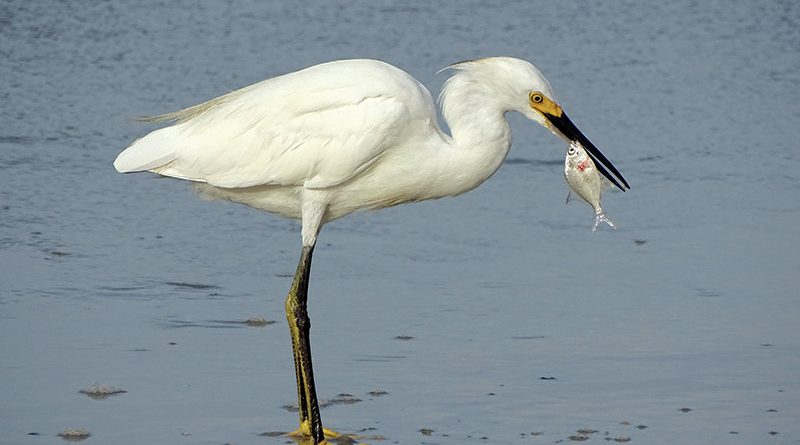 A snowy white egret eats a fish on the beach. A new study looked at how the abundance of forage fish, which are small fish at the bottom of the food chain, impacts the productivity of predators like seabirds, mammals, and larger fish. Shutterstock Photo

The study concluded in forage fisheries that are already being well managed and closely monitored, adopting additional precautionary measures would likely not provide any additional benefits to predator population growth.

“We were really interested in understanding how the abundance of forage fish, which are small fish at the bottom of the food chain, impacts the productivity of predators that we care about, like seabirds and mammals and even predatory fish,” said Free.

Tuna, rockfish, squid, and salmon are all predator populations that feed on forage fish and are all economically important species here in California and nationwide.

In many parts of the world, forage fish fisheries are managed using precautionary principles that target catch limits below the maximum sustainable yield, but there are increasing calls to further limit forage fish catch, on the premise more measures will better provide for the needs of predator species including seabirds, marine mammals, and fish.

The findings of the study are particularly relevant as legislators are considering a bill introduced this year, the Forage Fish Conservation Act, which would require the Secretary of Commerce to develop a definition of forage fish, as well as improve the conservation, monitoring, and management of these fish species.

Free and his team examined decades of historical abundance data of both forage species and their predators from five regions around the world and using mathematical models, found of the 45 predator populations studied, only 6, or 13 percent, were positively influenced by extra forage fish. Those included four fish, white marlin, cod, striped marlin, and arrowtooth flounder, and two birds, arctic tern, and Cape gannet.

“What that broadly suggests is that extra precautionary catch limits on forage fish are unlikely to sort of preserve predator populations any more than the precautionary measures that we already use to manage forage fish,” said Free.

He said California and more broadly, most of the United States, already have well-managed forage fisheries.

“What we find is that current fisheries management has been successful at holding forage fish abundance above thresholds that would negatively impact predators,” said Free.

“One of the reasons we think predators have been so resilient to changes in their forage fish prey is that they’re highly mobile, they have high diet flexibility, which both of those things together allow them to go and target prey that is doing well in certain years and that makes them really sort of robust to changes in forage fish abundance,” said Free.

Free said the study could have important implications for how strictly to manage forage fisheries.