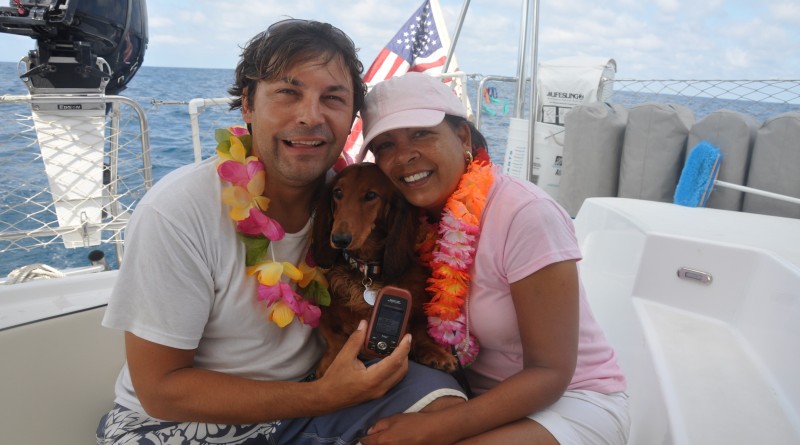 Dietmar Putschnig and his wife Suzanne DuBose embarked on a seven-year sail from San Diego to the South Pacific in 2008. Their dog, Vienna, joined them on the trip.Dietmar Petutschnig photo

SAN DIEGO — Sailing the high seas oftentimes give sailors new and old a fresh perspective on life. The freedom of being on open water is both appealing and romantic. On calm days the boating experience can provide with moments of peace. Just the same there are challenging days where rough waters bring a fair share of problems and worries, but being on a boat is generally a welcomed experience by most participants, including Dietmar Petutschnig.

Petutschnig, who emigrated from Europe to the United States in 1987, tried his hand at sailing as a child in Austria, but his boating days did not really pick up until his early 40s after a trip to J World in San Diego formally reintroduced Petutschnig and his wife, Suzanne, to boating. They have since sailed the South Pacific and, after many years at sea, have barely set foot on land.

Petutschnig talked with The Log about how the couple learned how to sail in 2007, bought their first boat, and set sail from San Diego to the South Pacific in 2008.

How did you and your wife get into sailing in the first place? What are your respective ages and why take up sailing in 2007 instead of earlier in life?

It was a combination of events – I’m 48 and Suzanne will not admit to any age. We had moved to Las Vegas from New York City after 9/11 and realized it was important to live a happy life. One summer we decided to rent a house in Coronado to get away from the desert and while in San Diego I suggested we take some sailing lessons – which we did with J World. I had sailed on lakes in Austria growing up but nothing more than the little Optimus.

Did learning how to sail come naturally to you and/or your wife? What were the challenges?

Being in the water came naturally to both of us. We loved the air the gentle breezes and both have traveled and grown up in multiple countries around the world. The challenges were the usual ones: getting used to the nautical terminology (halyard, Cunningham, sheets, tillers); getting on and off the dock; and, sailing in San Diego Harbor with aircraft carriers and commercial vessels in confined spaces.

What resources did you use to make sure you found and purchased the right boat?

I was told in no uncertain terms after a few boat shows that I could get any boat I wanted as long as it was a catamaran – that made choosing our Lagoon 440 a no brainer. To this day I love the unrestricted visibility on the fly bridge – and have never once regretted that decision.

How did the stars align for you to spend seven years in the South Pacific? Was there ever a time along the way you just wanted to quit? Or perhaps it was the other extreme and you wanted to sail elsewhere?

We left for a shakedown cruise from San Diego in April 2008 and returned after three months in the Sea of Cortez and loved it. Upon our return we decided to go back down with the Baja Haha and started to get a glimpse of the social aspect [of sailing]: the pot lucks, the parties, the camaraderie, the maritime spirit of paying it forward and helping each other out. We had a spectacular Thanksgiving on Isla Partida in the Sea of Cortez with our buddy boat, Follow You Follow Me from SFO, and decided to join the puddle jump, so we prepared for that from that moment and had four months to do so. Plenty of time! Once you get to the South Pacific you meet many boats and amongst them several circumnavigators. Fewer private boats cross the Pacific each year than folks climb Mount Everest. Once you are there you want to stay, and with over 16 unique cultures and 20,000 islands why rush?

Was being out at sea everything you thought it would be?

So much more! It is hard to explain the peace you feel after Day 2 on a long passage. There is a rhythm and solace. A comfort of gliding under the stars, smelling land on approach, it’s so much more and brings you closer as a couple.

What words of advice do you have for anyone planning to head out to sea now, whether first-timers or savvy veterans (or someone in between)?

Go. Go now. Your boat (check) list is endless and no boat is perfect but if you can safely go – go. We have met mariners from all walks of life and all income levels and none of them ever regretted leaving land when they did. There is a truly amazing simplification that takes place and you can be part of and what makes you smile. Some of the best moments in my life are seeing the Milky Way underway at 7 knots on a moonless night – you feel as if you are gliding amongst the ages with the wind kissing your sails.