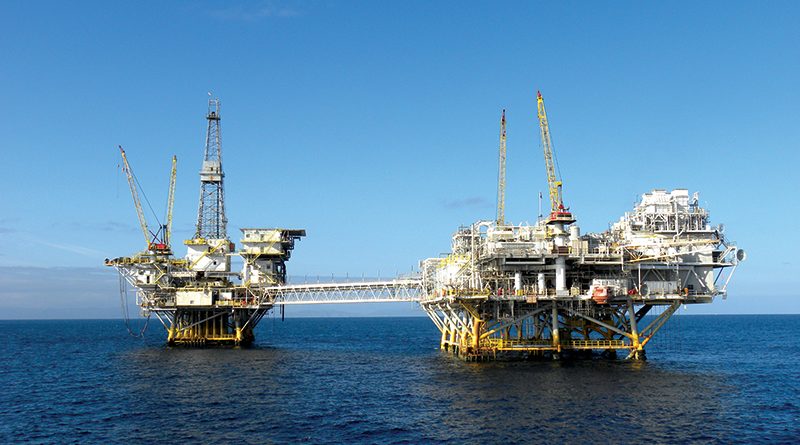 Oil platforms Ellen and Elly, off the coast of Long Beach sit about 250 feet above the ocean floor and 4.5 mile offshore. Image provided by the Bureau of Safety and Environmental Enforcement.

After the Oct. 2 oil spill in Southern California, alleged failure to properly maintain oil platforms and abide by existing plans and regulations has landed the federal government with notices of intent to sue.

HUNTINGTON BEACH— On Nov. 2 the Center for Biological Diversity filed  a notice of its intent to sue the federal government in response to the Oct. 2 oil spill. The center is suing for alleged oversights allowing Platform Elly (which houses equipment to process oil from platforms Ellen and Eureka) and other offshore oil production in the Beta oilfield to operate under outdated drilling plans written in the 1970s and 80s. The center also filed a notice against the BOEM on Oct. 8 for failure to account for the impact offshore drilling has on endangered species.

The Center recalled that the BOEM has failed to audit and require revision of the outdated plans. They believe BOEM has neglected its duties despite the recent oil spill, the age of the infrastructure, and other changes since the logistics were authorized about four decades ago.

The Endangered Species Act (ESA) suit and the Outer Continental Shelf Act (OCS Lands Act) suit will both be directed against the BOEM. The Endangered Species Act-based notice from the Center also has intent to sue the National Marine Fisheries Service and U.S. Fish and Wildlife Service. All federal agencies considered to be expert wildlife agencies for ESA consultation that have the duty to reinitiate consultation, which lies with both them and the action agency. All agencies were being relied on by BOEM for requirements for offshore drilling, and all collaborated closely in process of constructing the regulations and requirements of the offshore platforms.

The Center argues that offshore oil and gas drilling is inherently dirty and dangerous as shown by the recent spill from a pipeline connected to Platform Elly. They argue that the age of the infrastructure is responsible for littering the Pacific Ocean for over half a century, in turn heightening numerous inherent risks. As such, The Center requests that BOEM must immediately begin phasing out this treacherous activity on the Pacific Outer Continental Shelf (OCS) and all other regions.

“The subject of our second lawsuit (the Nov. 2 notice) is due to the fact that platforms are all operating under development and production plans that are decades and decades old,” said Kristen Monsell, legal director of the Center’s Oceans program. “One of those plans for the Beta unit, which is the name of the field that platform Elly is in, which is connected to the pipeline that spilled— that plan estimated that drilling would cease in 2007 and the infrastructure would be decommissioned in 2008. Our notice letter alleges that the agencies are now required to go back and review these development and production plans and require oil companies to revise them because they are so out of date; several triggering events have happened, and they are required to review and revise them.”

The October oil spill leaked 25,000 gallons of oil into the Pacific Ocean, shut down miles of beaches and fisheries, greatly hindered commercial fishing, and killed and injured birds and other wildlife, including those species that inhabit the Huntington Beach wetlands. According to the California State lands Commission, 23 federal pipelines pass through California state waters and are inspected annually.

“Concerning the endangered species act lawsuit, that case is based on the agency’s failure to carefully examine the impact of oil and gas drilling on threatened and endangered species,” said Monsell. “It wasn’t just the oil spill that was wrong in their analysis. There are other things like the impacts from vessel strikes.”

According to Monsell, endangered whales and other species are being run over by vessels that transport supplies and crews to and from the platforms. “The analysis is based on outdated information that doesn’t properly account for the significant increase of ship strikes on endangered whales off California, and new information showing that not only the number of vessel strikes are increasing, but they may actually be impeding the recovery of these endangered animals,” said Monsell. “The agencies need to look at the impact of vessel traffic from oil and gas activity directly but also accumulatively. If they’re not carefully examining the baseline of the harm from existing vessel traffic, then it can’t adequately look at the additional harm from oil and gas activity.”

The oil spill opened questions about the operation of these offshore oil platforms.

“We discovered that after the oil spill, the existing consultation that is in place completely discounts the possibility of an oil spill,” said Monsell. “It says that it is highly unlikely, but in the event that it does happen, it will only be about 8,600 gallons of oil and won’t cause any harm. The oil spill showed that that assumption was incorrect both because there was an, in fact, an oil spill and then also it spilled more than 8600 gallons of oil.”

The notice filed explains the BOEM is allowing companies to operate under plans that were approved four decades ago despite an abundance of information that proves that the plans are dangerously outdated and do not concur with current science, environmental and safety hazards, or the urgent need to transition to fossil fuel development.

The notice letters are a prerequisite to filing the lawsuits. “We filed the Endangered Species Act [notice] on Oct. 8, and then we filed the one about the outdated drilling plans on Nov. 2,” said Monsell.

The purpose of the 60-day compliance offer is to serve the agencies a letter of intent to sue and why, and they then have 60 days to comply, and make the necessary changes. If they don’t succeed by the time the 60 days is up, then the lawsuit is moved forward with.  Neither of the two notices have been addressed yet.

According to The Center, federal regulators have not required updated drilling plans for the Beta field’s platform even though the plans indicated that the offshore platforms would wind down production in 2007 and be decommissioned more than a decade ago.

The Nov. 2 notice explains that this oil spill is new information that proves the prior analysis is inadequate. It is required by law that these agencies take the careful look and operate under updated regulations and requirements.

The Center also sent a petition to the Biden Administration. The petition asks to suspend all activities at these platforms and then ultimately cancel the leases.

“One of the reasons why I think we’ve seen drilling for so long off California is because the outer continental shelf land act, which is the statute that governs drilling in water, allows leases to continue as long as oil companies are recovering oil in payable quantities,” said Monsell. “However, there are provisions in the statute that allow the federal government to cancel leases if certain conditions are met. Such as if the drilling does harm to marine, coastal, or human environments, and we think that these [conditions] are being met here and the administration should use its authority to cancel the leases off California.”

The Center argues that Biden officials need to update plans and lay out a schedule for shutting down these aging platforms. The Center also argues that California has seen spill after spill in its coastal waters, and believes offshore drilling is at odds with any serious effort to fight the climate emergency.

“I think that if the agencies take the hard look that is required under various statutes that it should make the decision that they need to move all of these platforms and pipelines and wells into the decommissioning phase and get all of this dirty infrastructure out of our oceans,” said Monsell.