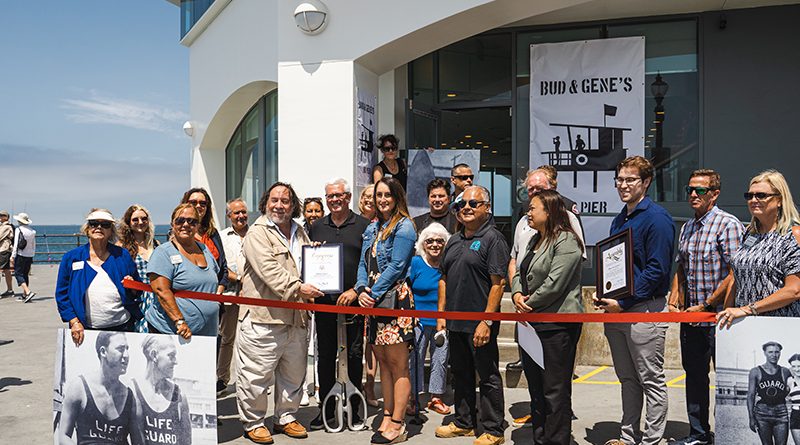 The beloved diner that resided at the end of the pier since 1996 will now be occupied by a new restaurant that is currently a work in progress.

The new restaurant gets its name from two of Huntington’s first lifeguards nearly a century ago. The names represent a lot of history from Huntington Beach as it was named after lifeguards Delbert “Bud” Higgins and Gene Belshe, who surfed on 135-pound surfboards and organized the first surf contest in 1933. In later years, Higgins became the Huntington Beach fire chief, and Belshe became the assistant police chief.

Bud & Gene’s is a work in progress and will specialize in sustainable seafood and burgers, with possible plans to modify their concept in the future and possibly expand. For now, the restaurant is operating as a “pop-up” of sorts. The current menu ranges from casual to gourmet entrees and, as of now, operates from 11 a.m.- 8 p.m.

Restaurant group RAV LLC is developing the new restaurant. John Cunin, the director of development for the restaurant group, told the OC Register in an interview that “everything is on the table with respect to change.” However, Cunin also said there is also permanence, “I don’t mean to be cryptic, it’s just the truth.”

According to Cunin, Bud & Gene’s is only in its first phase while the concept for the restaurant waits to be finalized. The future will bring a possible hiatus for additional renovations.

Ruby’s Diner lived at the end of the Huntington Beach Pier since 1996, replacing The End Café, the diner filed for bankruptcy in 2018 and ultimately closed in Feb. 2021 due to financial struggles that couldn’t survive the COVID-19 pandemic. The 50’s-styled diner was part of a chain of 32 other restaurants known for their malts, burgers, and fries.

A significant reason for the company prematurely opened its unfinished project early was to be open during the Vans US Open of Surfing which ran from July 30 through Aug. 7, an event that draws in thousands of visitors.

Before striking out on his own, Witzl held the executive chef post at Herringbone Santa Monica and worked in some of the world’s most esteemed kitchens, including the James Beard-nominated M.B. Post in Manhattan Beach, three-Michelin-starred Martín Berasategui in Spain, Campanile in Los Angeles, and The Water Grill in Los Angeles. At Bud & Gene’s, Witzl applies his scratch cooking and fine dining culinary techniques to seasonality and a sincere commitment to responsible and sustainable sourcing by leveraging his longtime relationships with local growers, purveyors, butchers, and fishermen.

Witzl has modified the vibes of the former diner by introducing raw ahi, chili prawns, and whole grilled fish to the menu. Although certain items may be fancier than what was offered at the diner, Bud & Gene’s also offers a burger, fried chicken sandwich, fries, and soft serve ice cream. The outside take-out window that Ruby’s slung to-go malts from will remain a feature for take-out orders.

“Growing up in Whittier, I have fond memories of coming to Huntington City Beach and walking down the pier with my family,” said Witzl. “Opening Bud & Gene’s is a full circle moment for me and I’m looking forward to welcoming generations of beachgoers to this iconic location.”

The almost 26-year-old, 6,905 square-foot former Ruby’s Diner building has finally been stimulated with its significant deferred maintenance needs being addressed. In addition, new furniture and lifeguard-inspired decor have been added throughout, including a wave-themed mural by local artist Melissa Murphy. However, some remnants of Ruby’s Jan & Dean’s Tiki Lounge still garnish the new restaurant for the time being. And one classic detail has remained: the iconic red roof.

Stakeholders in the new restaurant have already submitted permits for approval to expand the building. Next, the permits are submitted to the California Coastal Commission, but it is suggested that it could take months before a response is given.

Whatever changes the future will bring for Bud & Gene’s, it still has the breathtaking 270-degree view of Southern California.