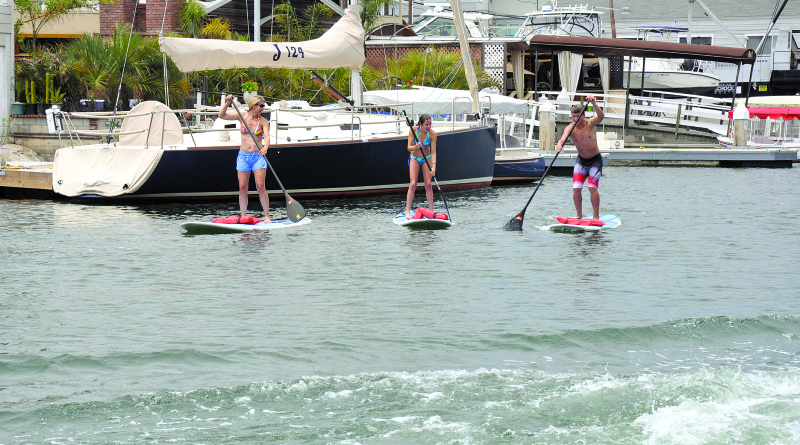 Standup paddleboards will not be prohibited from paddling in Oceanside Harbor’s main entrance or channel if city officials approve the reversal of a ban against human powered watercraft in the harbor.

Prohibition on kayaks and other personal watercraft could be lifted.

OCEANSIDE — Kayakers and standup paddleboard (SUP) users earned a tiny victory on April 18 when the Oceanside Harbor and Beaches Advisory Committee adopted proposed language and modifications to reverse a prohibition against personal watercraft (PWC). The committee’s decision will head to the Oceanside City Council, where the city’s elected leaders will deliberate whether the PWC prohibition should actually be lifted.

Current city law specifically prohibits all human powered vessels in Oceanside Harbor, though the city could grant waivers to temporarily circumvent the prohibition.

If PWCs are ultimately allowed in the harbor by the City Council then users of dinghies, inflatable boats, outrigger canoes, kayaks, SUPs and surf skis would be able to navigate through the harbor’s main entrance and channel so long as they honored rights-of-way of powerboats and sailboats.

“All human powered vessels authorized in the harbor pursuant to this [ordinance] shall give way, yield the right of way, and keep completely clear of all other non-human powered vessels, including both sail and powerboats,” the proposed ordinance amendment reads.

Oceanside Harbor Director Paul C. Lawrence said PWCs are a reality in any waterfront venue and users of kayaks, SUPS or similar craft should not be prohibited from a public area.

All human-powered craft users must steer clear of navigational channels and give right of way to sailboats, powerboats, and other similar vessels.

“They have an obligation to stay clear,” Lawrence said.

Certain items will not be part of the PWC definition and, accordingly, would not be allowed in the harbor. Those items include float tubes, fishing float tubes, air mattresses, floating chairs, and similar single vent devices.

Lawrence said these items have been found within the harbor in the past and cannot be maneuvered to steer clear of larger vessels, hence posing a safety hazard.

The issue will soon head to the City Council for a final decision but has already been deliberated extensively by the Oceanside Harbor and Beaches Advisory Committee (HBAC).

Committee members acknowledged enforcement of current prohibitions against PWCs and human-powered craft have been lax and seeing kayaks or standup paddleboards navigating through the harbor is a common sight.

Having a law on the books permitting PWC use could actually make it easier to promote safety and prevent or better address collisions between human-powered crafts and sail or powerboats.

At least one HBAC member – Les George – previously told The Log he hoped kayakers, SUP users and others would be required to undergo an educational requirement before navigating through Oceanside Harbor. George said he was okay with users of human-powered craft to exist in the harbor so long as safety was maintained as a top priority.

A water education program was developed in Santa Barbara to inform kayakers and standup paddleboard users how to safely navigate through the local harbor and co-exist with powerboats and sailboats.