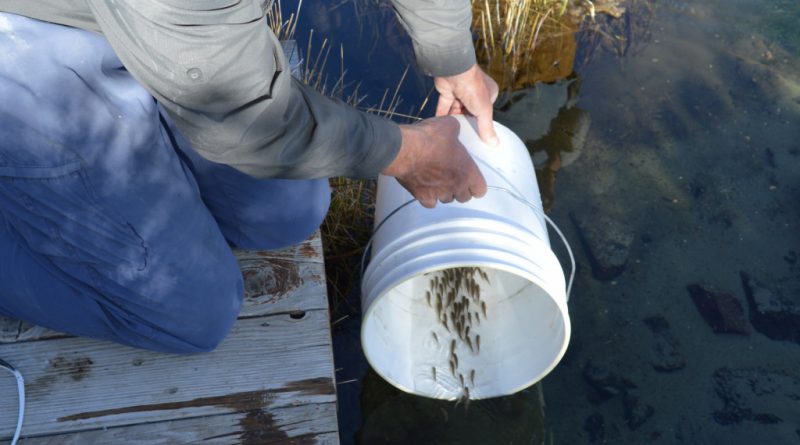 The species was declared extinct the first time in 1940, before being rediscovered only to face extinction again in 1969 when restoration techniques picked back up.

MONO COUNTY一 In a June 9 press release, the California Department of Fish and Wildlife shared that in early April’s biologists from the CDFW in partnership with the U.S. Fish and Wildlife Service, Reno Office had relocated pupfish from five different habitats in Owens Valley to the River Spring Lakes Ecological Reserve in Mono County.

The Owens Pupfish has faced extinction twice, once in 1940 and again in 1969 when fishery biologist Phil Pister saved the pupfish just days before its habitat dried up.

For the past five years, the CDFW and USFWS have worked to restore the fish’s habitat, removing non-native species from the reserve, and translocating more than 700 pupfish from Owen’s Valley to several square miles of marsh in the River Springs Lake Ecological Reserve in Mono County.

“This release represents the culmination of years of dedication and hard work by numerous former and current biologists,” said CDFW Fisheries Supervisor Russell Black in the June 9 press release. “This population will become the largest and most genetically fit population of Owens pupfish since World War I and is a great victory for conserving the species.”

The Owens pupfish is a small thin fish that ranges in color from bright blue for breeding males to brownish with a silvery stomach for females. They congregate in small schools and feed on aquatic insects.

The fish generally hang out in spring pools, sloughs, irrigation ditches, swamps, and flooded pastures in Owens Valley and historically from Mono County to Inyo County.

The introduction of non-native trout and bass paired with an increase in water resources development caused a decrease in the population.

For two days, biologists spent their time trapping, measuring, and collecting male and female pairings to move to the new site.

CDFW biologist Nick Buckmaster, the lead on the project, recently went to revisit the reserve to check on the progress of the fish and was pleased to see they were already spawning.

“They’re spawning successfully,” said Buckmaster in the June 9 press release. “This introduction is an important step toward securing the Owens pupfish against extinction and ensuring the continued existence of one of the most imperiled fish species in North America.”

According to Buckmaster, this is the first time in 100 years that the Owens pupfish were introduced into a habitat that is both stable and able to support their population for the long haul.