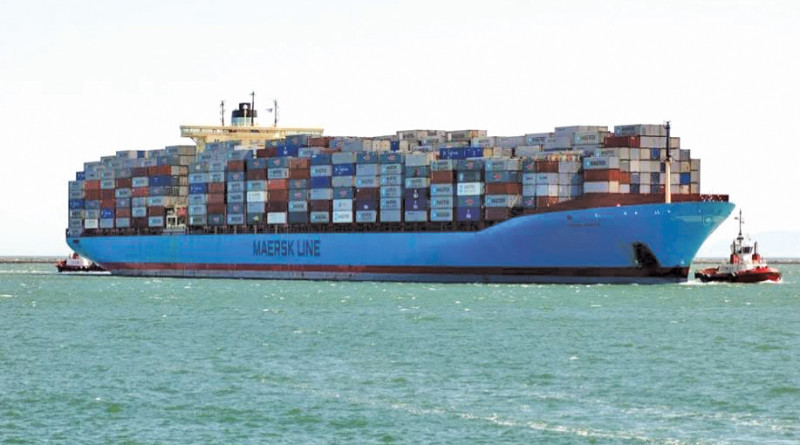 SAN PEDRO — Shipping company Maersk Line along with the ports of Los Angeles and Long Beach together are measuring the environmental benefits of a $125 million upgrade for 12 Maersk container ships.

The two ports are contributing a combined $1 million for high tech equipment to monitor vessel emissions over the next three while ships are at sea and at berth. This study, referred to as “The Connected Vessel Programme,” builds on the $125 million Maersk Line has invested in its program to reduce fuel consumption and increase the capacity of the vessels that regularly call at the San Pedro Bay ports.

“This project is a vivid example of the deep commitment to environmental sustainability that we have grown to expect from our goods movement partners, as we all work together to create a healthier planet,” Port of Long Beach Interim CEO Duane Kenagy said. “We’re pleased to be a part of this project, and we hope it will serve as a model to encourage even more progress and creativity in emissions reductions from ocean-going vessels.”

The project will continuously record how much fuel each engine uses in conjunction with speed, engine power, weather and other operational variables through use of mass flow meters and an interface to the Integrated Control System (ICS) on-board to capture key performance data. Information will be uploaded to Maersk Line servers via satellite, and each ship will be able to communicate in real-time with Maersk Line’s Global Vessel Performance Centre (GVPC) to increase operational efficiency.

“This is the equivalent of strapping a Fitbit onto a large container ship,” Dr. Lee Kindberg, Director of Environment and Sustainability for Maersk Line, said. “We’ll be tracking vessel performance and emissions 24/7. This advances our ability to reduce greenhouse gases and other pollutants on a global scale.”

The ports of Los Angeles and Long Beach will split the $1 million cost under their joint Technology Advancement Program (TAP). TAP is a grant program created under the ports’ landmark Clean Air Action Plan to accelerate the evaluation and demonstration of new and emerging clean technologies for reducing and ultimately eliminating harmful emissions from all port-related sources. Ships generate the majority of air pollution associated with port activity.

The Port of Los Angeles and Port of Long Beach are the two largest ports in the nation, first and second respectively, and combined are the ninth-largest port complex in the world. The two ports handle approximately 40 percent of the nation’s total containerized import traffic and 25 percent of its total exports. Trade that flows through the San Pedro Bay ports complex generates more than 3 million jobs nationwide.

Maersk Line is the world’s largest container shipping company, known for reliable, flexible and eco-efficient services. With 306 offices in 114 countries, Maersk provides ocean transportation services to customers in all parts of the world. Since 2007, Maersk Line has reduced GHG emissions associated with its vessel operations by 42 percent on a per container, per kilometer basis. With the port’s help, Maersk Line plans to reach its goal of a 60 percent reduction of CO2 and other pollutants by 2020.