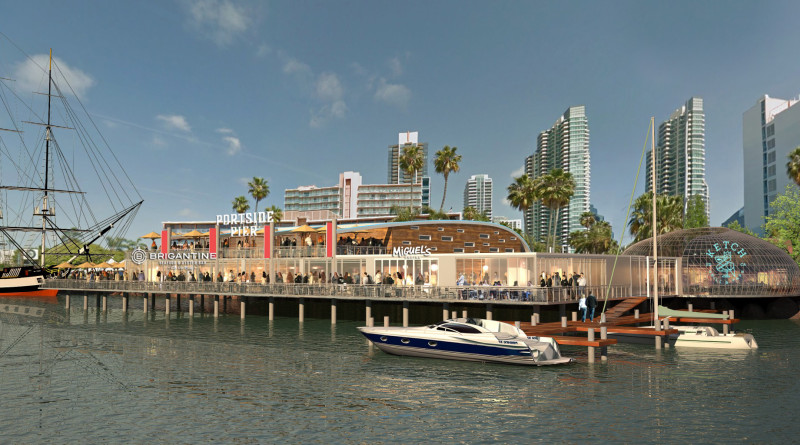 The Port of San Diego’s Board of Port Commissioners granted concept approval of The Brigantine’s proposal to develop a new restaurant at Anthony’s Fish Grotto’s current waterfront location. Anthony’s, established in 1946, had been on the San Diego waterfront since the 1960s.

Portside Pier Restaurant project would feature four new dining establishments – The Brigantine on the Bay, Miguel’s Cocina, Ketch Grill & Taps and a coffee/gelato shop – to the Anthony’s site, which is located at 1360 N. Harbor Drive in San Diego. The estimated budget for the restaurant redevelopment is $13 million.

“We are one step closer to developing out Portside Pier project along the #SanDiego harbor,” a Dec. 14 tweet on The Brigantine’s Twitter page (@BrigantineSD) stated.

“The project will modernize an existing restaurant facility and will provide enhanced public access amenities, including an expanded dock and dine dock, second-floor dedicated public viewing deck, and public perimeter walkway around the bottom floor of the restaurant building,” port district staff stated in a report to commissioners.

An expanded 3,370-square-foot dock-and-dine facility would be able to accommodate up to 12 vessels, port district staff stated.

Commissioner Dan Malcolm said the port district’s board would seek waterside activation – such as a dock-and-dine – incorporated into future port district development projects.

Mike Morton, president of Brigantine Inc., said his company’s Portside Pier project would be a welcome addition to the San Diego waterfront.

“We’re due for an improvement there [at 1360 N. Harbor Drive],” Morton told commissioners.

A few bureaucratic approvals are still necessary for The Brigantine’s restaurant redevelopment project to move forward, such as a lease agreement with the Port of San Diego, Regional Water Quality Control Board certification and Army Corps of Engineers permit.

Construction is anticipated to begin in spring 2017 (assuming all permits and agreements are obtained). Port district staff estimates demolition of current structures and construction of The Brigantine’s new restaurants would take between 11 and 16 months to complete.

Once completed the entire project would cover nearly 45,200 square feet of land and water area. The entire restaurant development is expected to accommodate 1,000 diners.

The Portside Pier Restaurant project would replace Anthony’s Fish Grotto, Fishette, Anthony’s Star of the Sea Room and a coffee kiosk. Anthony’s, which celebrated its 70th anniversary this year, signed a 52-year lease with the port district in 1965; that lease expires Jan. 31, 2017.

Port district staff issued a Request for Proposals (RFP) in May 2015 to have the property at 1360 N. Harbor Drive redeveloped. The Brigantine won the RFP bidding process, beating out five other proposals. Projected annual revenue for the Portside Pier Restaurant development would be at least $20 million, according to The Brigantine’s proposal.

Other bidders included Sunroad Enterprises and Fish Market Restaurants. The Fish Market proposal would have kept Anthony’s and Fishette at 1360 N. Harbor Drive.

Earlier this year the Port of San Diego approved a leasehold sale of Shelter Island’s Red Sails Inn Restaurant to The Brigantine. The new owners announced plans to convert the original home of The Log into modern dining concept. Red Sails Inn, established at Shelter Island in 1957, officially closed its doors on Aug. 31.

The Brigantine opened its first restaurant location at Shelter Island in 1969.

Commissioners unanimously approved the project’s concept at their Dec. 13 meeting; Commissioner Bob Nelson was not present.