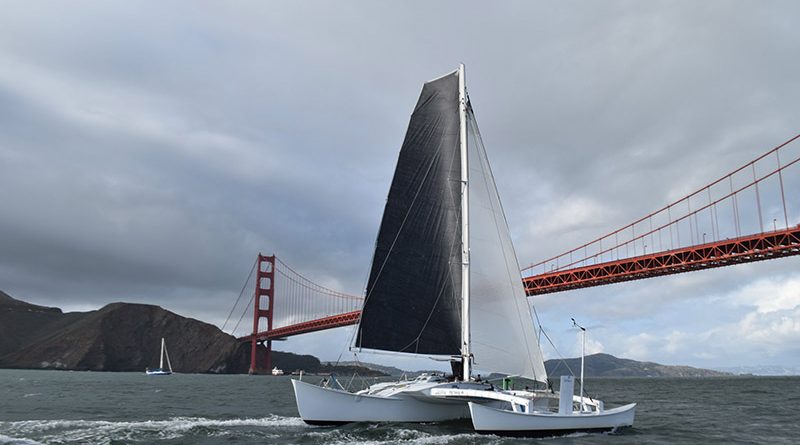 Finn named his attempt '2 Oceans - 1 Rock,’ and shared updates from his travels on his Instagram account, @2oceans1rock. Photo courtesy of Merfyn Owen.

SAN FRANCISCO— Ryan Finn, an American sailor, pulled into San Francisco on April 22 after a harrowing journey that took him from New York around the Cape Horn and up the west coast in a small single crew multihull sailboat. Finn has broken the record for the smallest vessel to complete the voyage, although he intended to be the fastest.

Finn departed on Jan. 19 from the Miramar Yacht Club in Brooklyn, New York, to execute his second attempt at setting the fastest non-stop solo-sailing record in America.

This is Finn’s second attempt at the record, the first one ending quickly after 24 hours when his boat faced hull damage. Although he missed the solo speed record, he achieved an extraordinary victory in the world of sailing and ocean sport, setting the record for the smallest vessel to complete the journey.

“I thought, what kind of record would an American sailor be able to do that would be of significance for the singlehanded community because basically, the French have all the major records for solo sailing,” said Finn. “The French get a lot of publicity; I can’t compete with them because their sponsorship level is so much higher…So as proof of concept, I thought, well, maybe I can do around the world, non-stop, east to west; the upwind record.”

Finn considered what type of boat could go upwind for his estimated 71-day journey. Finn’s record attempt was aboard the smallest boat to ever undertake the route, an adjustment Finn made from his first attempt to help sail faster. Finn sailed a Russel Brown, designed and built, 36-foot Proa Jzerro, named Jzerro. The boat’s design is modeled after ancient technology used by Pacific Islanders, known for its efficiency, speed, and reliability. A Proa is the oldest type of multihull and also the one least embraced by the mainstream western sailing community. Finn wanted to prove the viability of this type of sailing vessel for ocean sailing records.

“Ryan’s choice of boat for his record attempt is remarkable,” said Russel Brown in an interview with Sail-World. “It’s the same at both ends, has one outrigger, and is very fast. Jzerro is a proa. Proas trade side-to-side symmetry for end-to-end symmetry. The boat only needs one outrigger, but tacking involves changing ends [the bow becomes the stern]. There is a windward and leeward side but no port and starboard side on a proa.

Proas are as different as different can possibly be, but Ryan has made history in one. Ryan’s Jzerro is tiny and lightly built, yet he has proven that proas have the potential to be very fast and seaworthy. Ryan’s tenacity aside, many people are in awe of Jzerro’s performance.”

“So, I thought, well, something smaller like a multihull could do it, but what kind of a multihull could take that kind of a beating,” said Finn. “And I ended up with the Proa; I think a Proa could handle it better than a catamaran. It was a smaller Proa, like really small, actually quite too small of a Proa to do the New York to San Francisco record, but I did it.”

At 36 feet and 3,200 pounds, Jzerro is the smallest and lightest boat to complete the New York to San Francisco course singlehanded and the fastest sailboat under 40 feet to complete the voyage.

Finn covered more than 14,000 nautical miles heading south through Bermuda, into Brazil, and around Cape Horn in Chile, some of the most treacherous sailing terrains in the world, before passing Clipperton Island on his way up to San Francisco. Although he faced many challenges and had to forfeit 13 days to stop for repairs and spare parts in Brazil and Patagonia, Finn brought the 36-foot Proa, Jzerro around Cape Horn to San Francisco in one piece after 93 days at sea, 11 days short of the current 81-day record.

Finn proved both his and Jzerro’s ability to achieve what has been the most demanding voyage in the sailing industry by completing this voyage on the smallest vessel ever to attempt the trip.