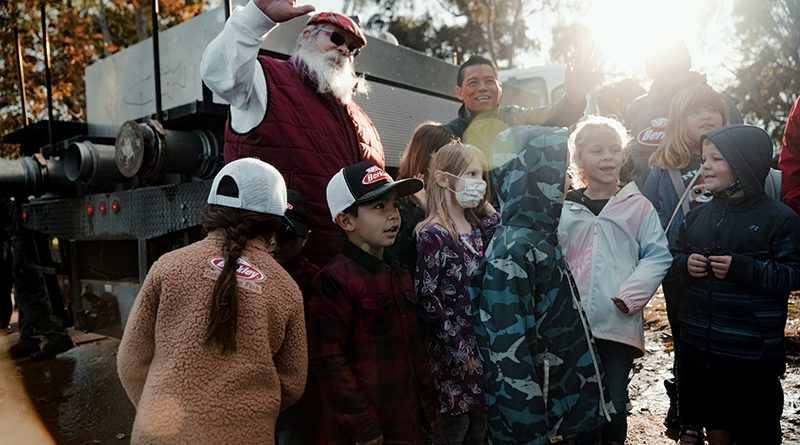 Berkley Fishing and Santa Claus teamed up to fish with kids in Long Beach and presented El Dorado East Regional Park with a $22,000 check.

Berkley, a fishing tackle manufacturer, teamed up with Jolly Old Saint Nick for a charity fishing event at the local park bringing free fishing equipment for the community and a $22,000 check for park conservation.

“Where Should Santa Fish After Christmas” started as a social media campaign from Berkley and Pure Fishing to encourage conservation efforts and recreational fishing in urban areas.

Participants from around the country filled out a Google Doc pulled from The Where Should Santa Fish website about why Santa should visit their city and what conservation projects they would spend the money on if they got the chance.

The company picked four finalists, and those finalists went head-to-head on social media in a voting campaign where the community got to vote on the best projects.

Long Beach came out on top in the final hours of the competition with a promise to spend the money on trash can lids, fishing line bins, erosion repair around the lake, and education efforts for conservation.

“We were just really pleased that the community is going to be able to use that money for something positive,” said Marc Kempter, VP of Marketing Communications for Pure Fishing.

Two days after Christmas, Santa joined the Long Beach community for a full day of fishing fun along the lake in El Dorado Park.

“It was one of the coolest things I have ever been a part of,” said Trinka Rowsell, executive director of Partners for Parks. “I am so glad I followed through on this random opportunity; to have Santa come out and educate the kids.”

Roswell, who initially submitted the application for Long Beach, was able to attend the event with her children and see firsthand the memories that were made.

The California Department of Fish and Wildlife made a pitstop before the event started to restock the lake with 700 pounds of rainbow trout. Berkley representatives joined Santa to pass out gear, assist new anglers, and educate anglers on urban fishing.

“Berkley pros were amazing; they were out there baiting everyone’s hooks and setting up their poles for success. They were just beyond friendly and happy to be out there doing what they do,” said Roswell.

Santa presented the check with the $22,000 donation from Santa and Berkley to Partners of Parks. The check has been earmarked for improved youth programs, improvements to the campground and lakes, education for the community, new trash can lids, and new fishing line bins.

The event received such a positive response from around the country that Berkley and Pure Fishing are looking to bring the competition back next year, with an okay from Santa, of course.

“Well, this is the first time we have actually done this contest, but it was so popular we are already talking about doing it again next year,” said Kempter. “Santa likes to go fishing; it’s the way he relaxes like most Americans.”