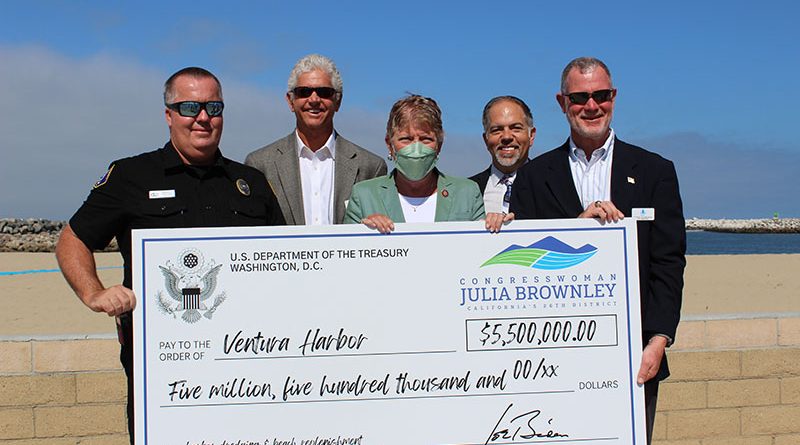 The Ventura Harbor Entrance dredging project has smoothly begun after the federal appropriation of $5.5 million was awarded to the Ventura Port District, an annual award that supports the movement of an estimated 380,000 cubic yards of sand.

VENTURA— U.S. Representative of California 26th District, Julia Brownley visited the Ventura Port District to celebrate the federal appropriation of $5,516,000 for maintenance dredging in Ventura Harbor. The check was presented to the Chair and Vice-Chair of the Ventura Board of Port Commissioners, Chris Stephens and Michael Blumenberg.

The Ventura Port District works with California Congressional and Senatorial representatives on an annual basis to maintain the channel.

The harbor dredging in 2021 was funded as one of Brownley’s ten Community Funded Projects as a part of the Fiscal Year 2022 Omnibus; the project was also supported by Senators Dianne Feinstein and Alex Padilla.

Brownley’s project funding is a supplement to funding provided in President Joe Biden’s budget which ensures the Ventura Harbor entrance maintenance. This is where the initial funding comes from.

“Since first being elected to Congress, I have been tireless in my work to secure funding for the dredging and maintenance of Ventura County’s harbors,” said Brownley in a press release from July 18. “The dredging of Ventura Harbor is essential to ensuring continued operations of this critical West Coast fishing hub. The annual funding is vital to ensuring that the harbor’s federally authorized channel remains open to those who rely upon the harbor, including the commercial fishing industry and supply chain businesses.”

“This funding will support operations at the harbor, support local businesses that rely on these waterways, and ensure the preservation of our coastline and beaches,” said Brownley. “The dredging efforts also help keep our local tourism and recreation industries thriving to provide recreational opportunities for everyone throughout the region. This is a real win-win-win!”

In the July 18 press release, Ventura Port District General Manager Brian Pendleton expressed that the public benefit of the annual maintenance dredging extends beyond keeping the channel open. The booming tourism that Ventura County beaches generate is a direct benefit to the county, and maintenance dredging helps ensure this, according to Pendleton.

The U.S. Army Corps of Engineers is responsible for the completion of the project, which Congress first authorized in 1968 through P.L. 90-783. Funding for federal agencies, including the U.S. Army Corps of Engineers, must be approved annually by Congress through the annual budget and appropriations process. By maintaining this deep draft navigation channel, it ensures that the nearly 1,500 harbor vessels, including the Channel Islands National Park ferries, commercial fishing vessels, and private boaters, have unrestricted entry between the ocean, Ventura Harbor, and the Ventura Keys.

“Congresswoman Brownley has been involved in this effort since she was first elected in 2012,” said the Office of Congresswomen Brownley. “The annual process begins with the submission of the President’s budget request to Congress. From there, the House and Senate each develop appropriations legislation. Once each chamber approves its version of the bill, a conference committee works to resolve differences, and the final bill that passes the House and Senate is presented to the President for signature. The U.S. Army Corps of Engineers then develops a “work plan” based on the enacted legislation.”

There are several regulatory agencies involved in the dredging activity, according to Pendleton. The material in the entrance channel and sand trap is very well suited for beach nourishment after the winter erosion of the beaches.

“So, in addition to keeping the entrance safe and navigable, the high-quality sand is redistributed onto adjacent harbor beaches,” said Pendleton in an email from July 21. “This in turn helps to provide an accessible and safe beach going experience for the public, while defending protected species habitat. The public benefit of the annual maintenance dredging extends far beyond keeping the channel open.”