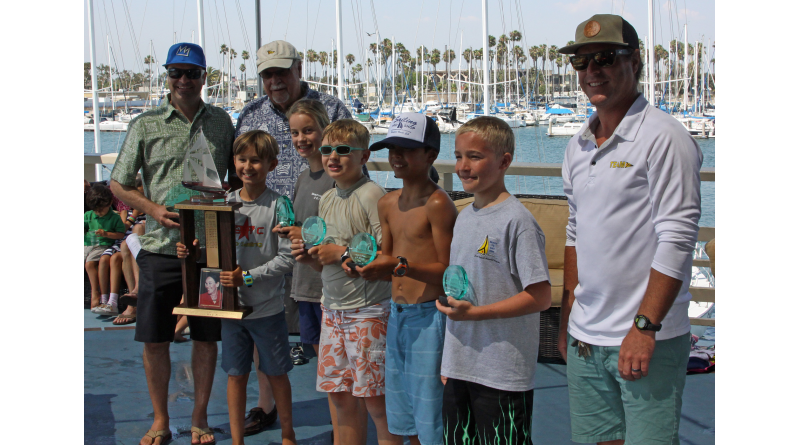 LONG BEACH — Alex Lech, 10,  of Long Beach Yacht Club won the 29th annual Jessica Uniack Memorial Beach to Bay Race perpetual trophy July 28 in racing his Naples Sabot dinghy to first place in the Sabot C3 class, the largest class for the event. The annual junior sailing race is hosted each year by Long Beach YC and, this year, was sponsored by Bellingham Marine and supported by Sailing Pro Shop and Ganahl Lumber.

Lech said, “It was a long race. I just wanted to have fun and do my best.”

His dad and mom, Radek and Agnes Lech, were beaming and shared why his accomplishment meant so much to them.

“This is only his second year sailing,” said Agnes. “This year he enrolled in both the morning and afternoon sessions, and his skills went from medium to super!”

Long Beach YC Sailing Director Jess Gerry agreed and talked about Alex and his big improvement over the last year.

“Alex started sailing last year,” said Gerry, “and he just seems to thoroughly enjoy being on the water. His improvement is a direct result of his enjoyment of sailing.”

Most of these classes sail in bays and occasionally on the ocean, but this is the only junior sailing event of the year where the 8-foot-long Sabots ever venture out on the ocean.

The event was postponed one week from its originally scheduled date of July 21 due to a major sewage spill in the Los Angeles River that closed all beaches in Long Beach and Seal Beach. Long Beach Yacht Club consulted local agencies and decided it was in the best interest of the young sailors to wait a week to run the race.