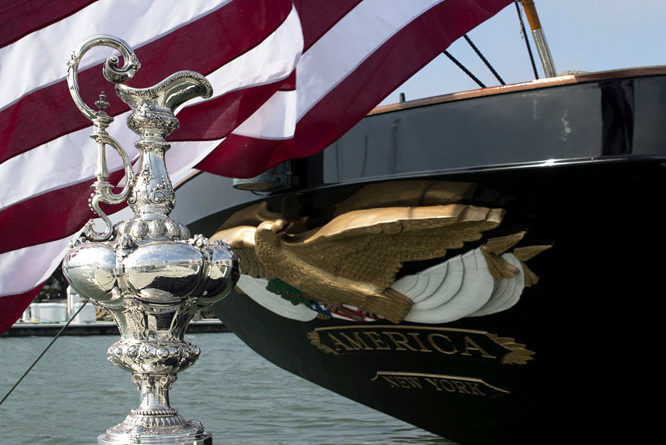 The America’s Cup is launching a tour leading up to the 2017 America’s Cup races in Bermuda. The mission is twofold: to spark new excitement in the current yachting community about the latest America’s Cup racing; and, to engage the next generation of America’s Cup fans by highlighting the technologies that have elevated the sport to its present state.

Tucker Thompson, the TV and public host of the 35th America’s Cup, will offer presentations about the event to yacht clubs and organizations throughout the United States and worldwide.

In conjunction, Troy Sears will take the modern replica of the world’s most famous racing yacht, America, to sailing communities in the U.S., Canada, Mexico and the Caribbean. This will give sailing fans of all ages a chance to sail back in time aboard a replica of the vessel that first won the America’s Cup in 1851.

“The goal of this tour is to celebrate the event’s storied history and infuse a new level of excitement and involvement in the America’s Cup now and for generations to come,” said Sears.

The tour begins on July 3 in San Diego and America will embark on a North American voyage, serving as an official ambassador of the America’s Cup. On its first leg of the Tour, America will travel up the Pacific coast, stopping at yacht clubs and other seaside venues en route to its final western stop in Vancouver, British Columbia.

In 2016, America will travel to yacht clubs along the Mexican and Eastern seaboard before making a series of stops throughout the Caribbean en route to its ultimate destination in Bermuda, the venue for the 2017 America’s Cup.

Thompson will also offer America’s Cup presentations to yacht clubs and organizations from 2015 through the start of the 2017 America’s Cup.

“I can’t imagine a more perfect complement to the tour than for sailing fans to have the ability to sail aboard the yacht by day and celebrate the event at night,” said Thompson.

To learn more about the America’s Cup Tour, visit americascup.com.