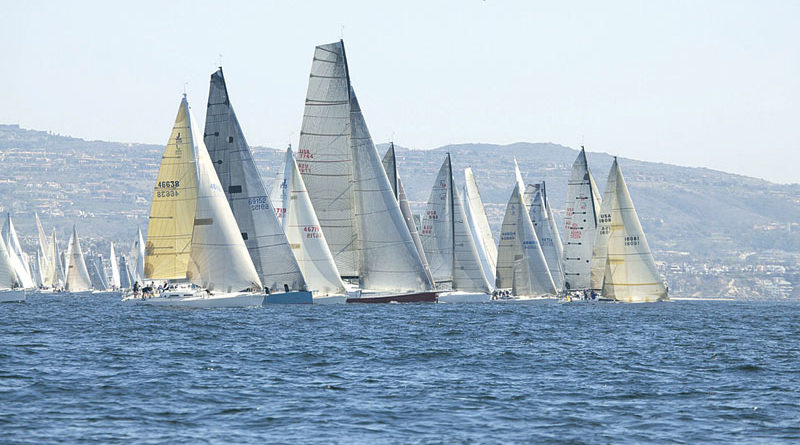 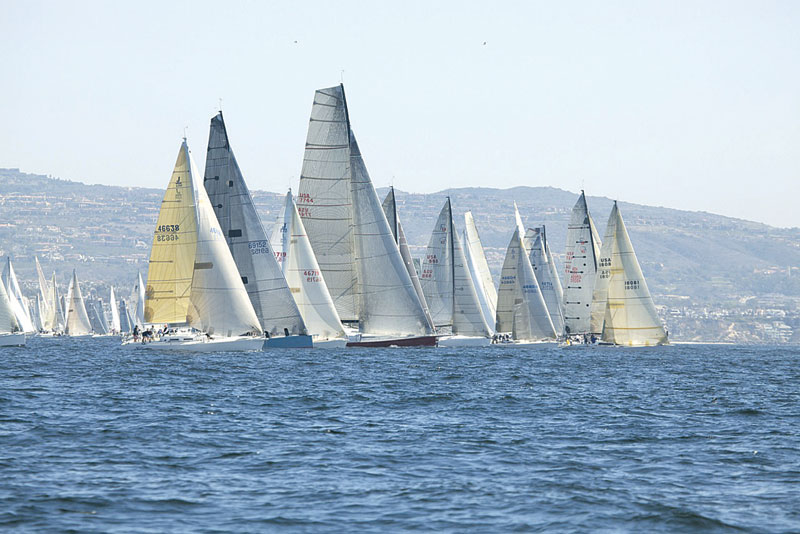 NEWPORT BEACH — Both spectators and racing sailors were awed by the on-the-water spectacle at the Border Run start line, as more than 200 boats sailed toward one single start off Balboa Pier at 11:30 a.m. March 10.

“We went to great lengths to create five lines in one, for three courses — more than 1 mile long — to make for a safe, efficient and exciting starting line for our Border Run racers” said John Marshall, commodore of South Shore YC, the organizing authority for the event.

“The start had my heart pounding as we found our spot on the line” said race co-founder Randy Reynolds, sailing his 33-foot catamaran Cat Attack II. “What a thrill to be sailing with 200 boats at one time, and knowing how you stack up to your competition without a rolling start. The crew was smiling from ear to ear, and the adrenalin was pumping as we watched all the boats sail off the line. It really was an amazing sight.”

After the start, the wind challenged sailors as the south wind stayed on the bow, making the race an upwind battle for all three courses until dying to a whisper once the sun went down. On the Short Course and Long Course to San Diego, only half the fleet finished — with the other half enjoying the full moon and flat seas as they motored to the party at Silver Gate Yacht Club, this year’s venue for the San Diego trophy party.

The fourth annual race, which started as a response to one of the founders being excluded from the Newport-to-Ensenada Race, has become an event whose slogan is “everyone’s invited.”

“It’s funny how things work out,” said co-founder Randy Reynolds. “It gave us the opportunity to put together an event with new elements and components we thought the racing community would want. We’re delighted with the progress of the event — and, in the end, we have a good relationship with the Newport-to-Ensenada organization.”

Reynolds said he believes one of the key reasons why the event has become so popular in such a relatively short time is the fluidity in which they approach each year’s contest. While some yacht races are steeped in rigid traditions and formulas, the Border Run continues to experiment with ideas Reynolds said he believes respond to the changing nature of the sport itself.

For example, this year’s single start concept added excitement, Reynolds said. Most races begin a rolling class-by-class start, but in an effort to make this particular start more fun and exciting, organizers had the entire fleet begin at the same time, he explained.

Reynolds and Long said they are also proud of the charity aspect of the event. Last year, the Border Run raised money for the Leukemia Lymphoma Society — and this year, competitors raised $18,000 for both LLS and local charity City to Sea, which provides free education in ocean sciences and an introduction to sailing to at-risk children.

“I have to say, being a part of something that not only allows for a great time for those involved, but also raises awareness and money for these charities is really a great feeling,” Long said.