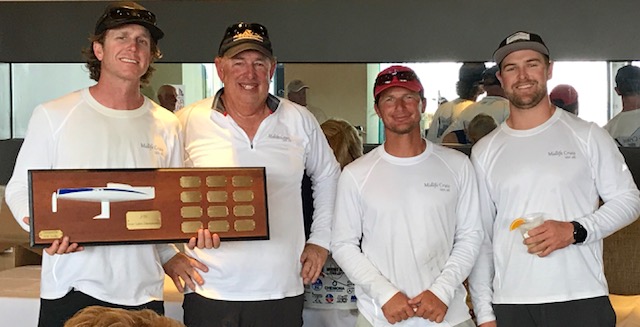 Bruce Golison, member of Alamitos Bay Yacht Club for about 40 years, has a passion for competitive sailing and a strong desire to be the best in the world.

He just recently returned from the J/70 North American Championship on the East Coast, happy to have placed in the top three after having only raced in the class for less than two years.

“I love sailing in very competitive classes. That’s why we are in the J/70 class,” Golison told The Log. “Right now, it’s a big class and a big fleet.”

Bruce Golison skippered his boat, Midlife Crisis, along with crewmembers Peter Kinney, Erik Shampain and Steve Hunt; they placed third among a fleet of 53.

He has sailed into first place at other East Coast and West Coast competitions.

Golison was the winning skipper in his class in the NOOD Regatta in Annapolis, Maryland earlier this year and overall in San Diego last year.

He qualified for the 2016 NOOD Championship Regatta in the British Virgin Islands, but said he was not able to compete due to scheduling conflicts.

Golison said he was born into sailing and started at a young age with Sabots.

“My father had a very strong passion for sailing,” Golison said. “He was the one person who gave me the love of sailing and the love of the sea.”

His first sailing lessons were with Seal Beach Yacht Club. He then became a member of Leeway Sailing Club in Long Beach at the age of nine.

“Leeway Sailing Club was probably one of the biggest sailing [clubs] in the country. They had a membership of about 1,200 kids every year. That was a great place to learn to sail and race,” Golison stated.

Golison said he always wanted to be out on the water sailing and racing as a kid.

“I’d just take my Sabot out and race even by myself. I’d just go out and pretend I was racing,” Golison relayed. “I never got tired of it.”

Golison credits not only his father for where he is in his sailing career today but also his bosses at North Sails, who, he said, were all Olympic medalists as well as businessmen at the time.

He worked for North Sails San Diego as a senior in high school and throughout college, where his senior management team of Dick Deaver, Lowell North, John Marshall and Peter Barrett encouraged him to do well in school and pursue top grades in his education.

“I had to show them my grades more than I ever did to my parents,” Golison said.

Golison shared an amusing story about sailing in a regatta with one of his bosses from North Sails.

“We literally sailed between a tugboat coming out of San Diego [and] two fully loaded barges,” Golison stated. “The tugboat slammed into reverse and dropped the cables, and we sailed on through. That was probably the craziest and stupidest thing I’ve ever done.

Today, Golison keeps his J/70 on the East Coast to race and has his Lido in Long Beach for local competitions.

His wife came up with the name of their boat, Midlife Crisis.

People are beginning to tell him the name is no longer appropriate as the years go by, but Golison just responds by saying “I’m still in my midlife crisis.”

He and his wife laugh about the name when Golison says the money and time is better spent on the boat than a red Ferrari or a girlfriend.

Golison expressed his appreciation for having a partner in life, his wife of 35 years, who enjoys traveling for the sport of sailing.

Golison may be taking a break but not for long. He has a full schedule ahead of him as he plans to sail the Lido in Long Beach for the next couple months before more practices and competitions in the J/70 class.

“Our J/70 program starts ramping up in February,” Golison mentioned. “We are going to work hard towards the World Championships in September in Marblehead, Massachusetts.”

He plans to charter a J/70 boat for Long Beach Race Week as part of his training for the World Championships next year.

He is motivated to keep competing at the age of 61, but admits he is worried.

“You just never realize or know how long you can stay competitive,” Golison confessed.

Golison said he was having a conversation with another sailor at the North American competition. They were discussing how long they have been competing. Golison told the other sailor he won his first trophy at a regatta in 1967, when the guy looked at him and said, “I wasn’t born until 1989.”

Golison, still obviously determined and motivated, said sailing is what keeps him young.