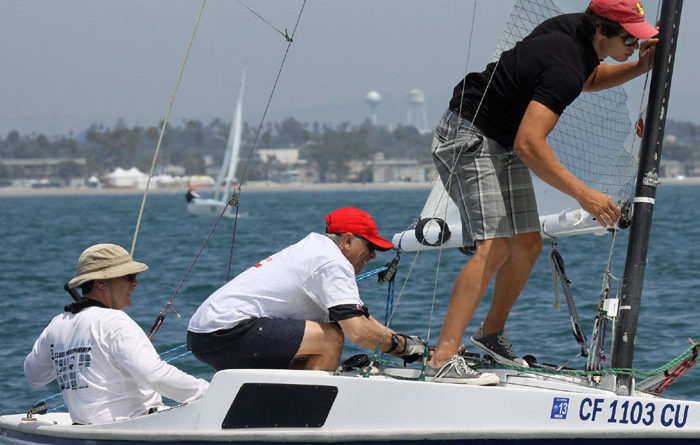 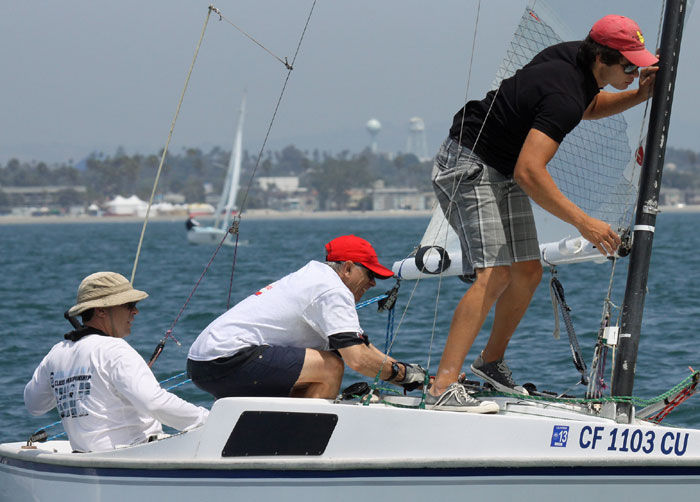 Having won previously in 2003 and 2004, Mark and Bruce usually race with Mark’s wife, Jennifer. But this time, they decided, as Mark put it, “to leave her at the dock” because of the light wind conditions. The wind was better than Saturday, but still only produced 6-10 knots until the last race of the day when it pushed close to 15 knots.

With a six-point lead at the end of the day Saturday over second place Mike Van Dyke, from Long Beach YC and Alamitos Bay YC, Mark and Bruce decided to play it conservatively and concentrate on keeping their lead by covering their competition.

“Today was fleet management,” Bruce said. “We were watching Mike, who did a really great job out there today. In the first race he extended out on the first leg, and we couldn’t catch him. He won that race, but we had a big enough point lead, we just practiced course management, and it all worked out.

“There was a big advantage to those that had only two people since it was so light,” he added. “That’s why we decided not to have Jennifer on the boat yesterday and today.”

“We just had a tough weekend,” Ives said. “Mark and Bruce sailed a fantastic regatta, and we’re happy for them.”

Van Dyke said, “The day worked out well with a third for the regatta. We sailed solid races, but when the breeze came up, well, that’s Keith’s bread and butter.”

In the Consolation Series, Dennis Palmieri, King Harbor YC, took first-place honors in a close fight between the top three boats. Going into the last race of the day, only one point separated first through third.

“There we were battling back,” Palmieri said, “when in the (starting) sequence for the last race a batten in our main came out. We dropped the main, put it back in, and then the main block broke! We fixed it all before the start and finished second in that race.

“Mark Barnard was our driver today, and Mike Price helped out on foredeck and tactics,” Palmieri added. “They were terrific, and it was important having them with us today.”

There were a couple of special awards given out for competitors only in the Championship Series.

Stuart Robertson, Alamitos Bay YC, won the Masters Skipper award for being the highest finishing skipper age 60 or above, and Yuri Namikawa, Cabrillo Beach Yacht Club, was the Top Women’s Skipper, taking the helm on her father Hiroshi Namikawa’s boat.

The Bronze series is for skippers who want to be a part of the Cal 20 Class Championship but don’t wish to compete for the Championship or Consolation Series.

Bruce Dybens, Long Beach YC, took first place in the Bronze Series and was quite satisfied with racing just Saturday and Sunday.

“The biggest challenge we faced,” Dybens said jokingly, “was showing up two days in a row to race. Seriously, I used to do the nationals every year, but I haven’t done it for a while. I enjoy this regatta and just wanted to participate. My crew, John Setchell, was a big help to me.”

The Cal 20 was originally designed by C. William “Bill” Lapworth in 1960 and went into production in 1961 at Jack Jensen’s Jensen Marine factory in Costa Mesa, where 1,945 of these sturdy fiberglass sailboats were built and, as this regatta shows, are still actively sailed throughout the country.