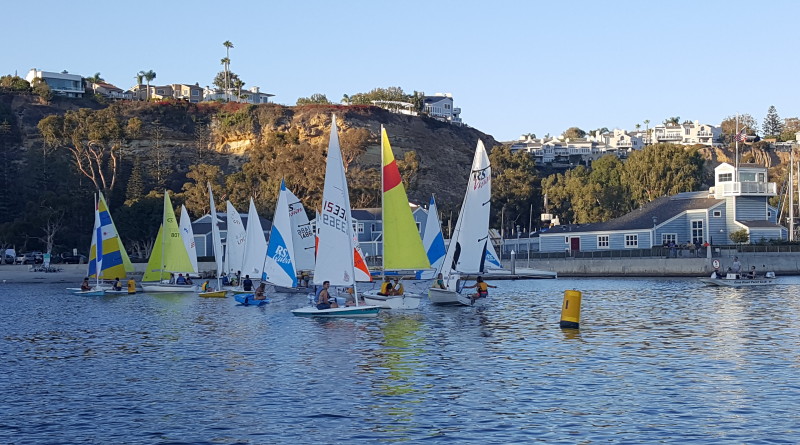 Young sailors competed in the last race of the seven-series Dana Point Harbor, Youth Soda-Pop Sailing Race in August. A total of 28 racers sailed in the final race.Photo courtesy of Westwind Sailing

The regatta marks the end to the seven-race summer series which has been running for five years in Dana Point Harbor.

Each week during the summer, youth sailors from Dana Point Yacht Club, Westwind Sailing, Dana West Yacht Club and Mariner Sea Scouts converge in the West Basin for an evening of excitement and fun competition. The programs rotate hosting and race committee duties weekly but each club provides at least one safety boat with volunteers to monitor and assist on the water at each event.

While the series has expanded to include adults, race organizers emphasis the focus remains on the youth.

The Soda Pop Series is the brainchild of former Dana Point YC Commodore Dan Hodge. In 2012, Hodge envisioned a race series for the youth of the various educational sailing programs throughout the harbor. The directors of the harbor’s youth sailing programs met to discuss the idea and bring it to fruition. Five years later, the series is a thriving success and a wonderful cooperation between the programs.

Awards ceremonies follow directly after each regatta to recognize the winners.  An added bonus of the ceremonies is that they build unity and respect amongst the racers, volunteers and programs.

The Soda Pop series is free for the sailors.