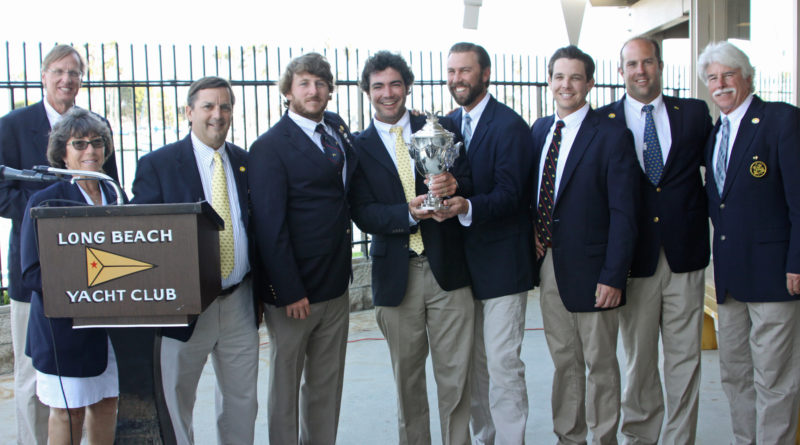 The format was set with the first skipper to win three points declared the winner. Durant didn’t need to go the maximum of five races, winning the first three in a row.

“I’m happy and proud to be a part of Long Beach YC,” said Durant.

Knowing San Francisco YC wasn’t coming down to Southern California for sunny skies and amusement parks, Durant said, “This year we knew there was going to be a little more pressure on us.”

Durant’s team of Ben Wheatley, Mike Lowe, Shane Young, Chris Macy and his father, Bill Durant, were made aware of the importance of winning this event when Durant took them out for practice on June 5.

“Compared to what we usually do for practice,” said Durant, “last night I put them through the hardest maneuvers we could do. It was hard, but they were up to it.”

Bennett was a good choice for San Francisco YC especially since he has had recent success this year on these boats winning the Long Beach stop of the California Dreamin’ Series match race series in March. Interestingly enough, Durant finished second.

“I think Dusty sailed great,” said Bennett. “The starts are critical and that’s my job. If you’re not winning starts then it’s really difficult.

“We could have been better, but this is such a great sport and I’m glad to be a part of it.”

San Francisco YC and The Corinthian Yacht Club jointly maintain a deed of trust which, among other areas relating to the trophy, sets forth the terms of regattas to be raced. It states that professional sailors are not allowed and all crew members must have been a member in good standing of their yacht club for at least six months.

Created in 1895, the sterling silver trophy is fought for on the water every year between San Francisco Bay are clubs and West Coast clubs outside the area, alternating in even-numbered and odd-numbered years.

San Francisco YC Commodore Suzie Moore said, “It’s sad to lose, but we couldn’t be more proud of the racing the last two years. It’s a Pacific Coast trophy and it is fun to give other clubs a chance to win.”

Race results can be found at lbyc.org.