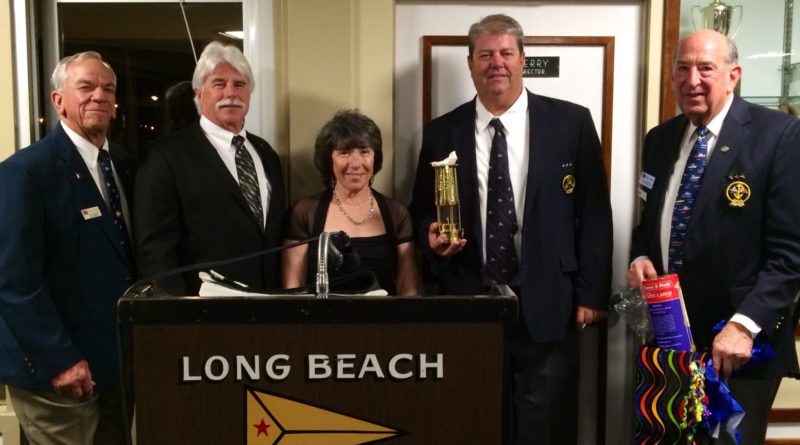 Sailors raced in warm weather with the temperature hovering near eighty and to top it off, the seas were flat and the currents mild. The short 15-mile course was run almost entirely inside Long Beach Harbor winding among all four of the oil islands.

Ten boats turned out representing six SCCA member clubs. Five of them were skippers new to the sport running under the Easy Entry provision. All they needed to do was show up at the skipper’s meeting and have a starting time assigned, without needing to know the precise speed of the boat or having done any time predictions. These skippers ran the course using the provided chartlet that listed the headings and marks to be called while one of their crew, called the observer, recorded the time of those marks on the actual log. They then dropped off the log at the club and the committee computed their predictions and calculated the score.

Predicted log racing has come into the 21st century. No longer are skippers limited to just compass and tachometer. They are now permitted the use of all the navigational tools available on their boats. The idea is this is an exercise in honing each skipper’s skill in using those instruments just as he or she would when otherwise navigating the vessel. So use of autopilot, GPS, radar, chart plotter, and speedometer is now permitted. The only thing prohibited is the use of a clock as that is how performance is judged. The result is that is it not only more fun and less frustrating having this information, but skippers get the pleasure of using all the modern navigational equipment they have aboard.

The results were presented the evening of March 7 in a leg-by-leg reveal following a dinner banquet at the Long Beach YC. The club provided trophies that were presented to the top five finishers and, in addition, there was a trophy for the first place easy entry skipper and another for first-year skipper. The new skippers indicated they indeed had a good time and planned to return for future events.

Under SCCA, there are monthly regattas run from March through October. They are hosted by member yacht clubs ranging from Marina del Rey to Newport Beach. Three of the regattas take racers to Catalina Island and the next on the calendar is the Easter, Catalina which will run from Long Beach to Avalon on Friday, April 10. For more information on predicted logging, check the SCCA website at SoCalCruiserAssociation.org or call Tom Collins at (818) 363-6292.