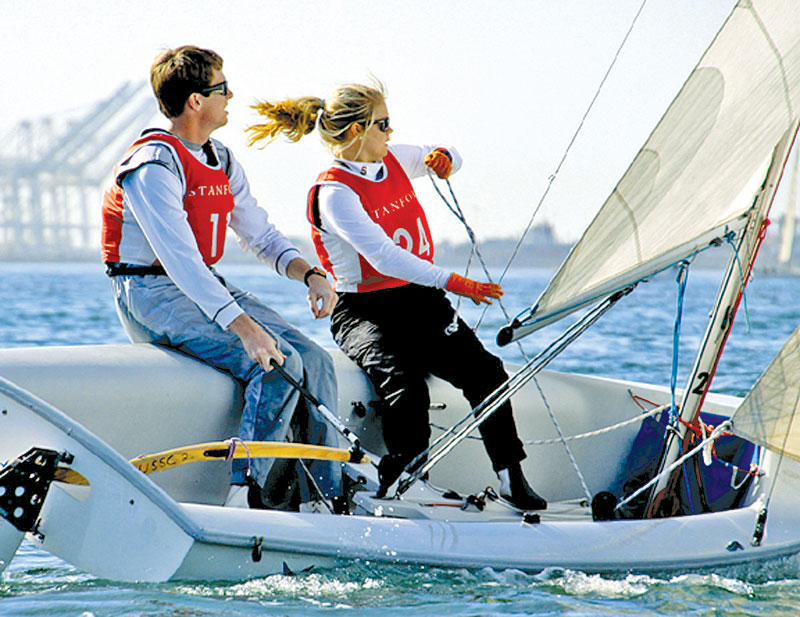 Jason Carminati, the captain from Yonkers, N.Y. who skippered the Midshipmen’s A boat in a close victory over Stanford, will start training to be a Navy Seal.

Alice Hong, his crew from nearby Palos Verdes, said, “I’ll be going to an aircraft carrier.”

Caroline Lockett, from Boston, who crewed for Michael Grove on the B boat, said, “I’ll be going to flight school.”

Grove, from San Francisco, is only a sophomore, with his near future in Annapolis, but he’ll carry a new weight as leader of the team.

“I didn’t really know what to expect here,” he said, “but it was great to win.”

A total of 29 college teams from 11 states and Washington, D.C., and 59 high school teams from the West Coast competed in the Rose Bowl Regatta. The collegians and high schoolers raced CFJ dinghies with two-person coed crews — male, female and mixed — on courses off the Belmont Veterans Memorial Pier in the Long Beach outer harbor.

The high school Silver fleet raced inside Alamitos Bay off the beach adjacent to Alamitos Bay YC. Each school was represented by A and B boats, combining scores. Racing started at 11 a.m. each day, and the pier was open to crowds of spectators.

After Day 1 of racing, Navy led Stanford by only two points in the 27-boat fleet but stretched that to nine, 61 to 72, at the end with solid, steady sailing while keeping another eye on a brawl among St. Mary’s of Maryland, 77; Georgetown, 78, and College of Charleston (S.C.), 79. The University of Southern California (USC), the host team, was a commendable sixth at 115.

Then there was — no surprise — Point Loma High School from San Diego, whose Varsity won its eighth consecutive Rose Bowl Gold Division championship, while its Junior Varsity 1 and JV 2 teams romped to second and fourth places among 27 schools from throughout the West Coast. Cathedral Catholic, also from San Diego, found room to squeeze into third.

How does one school collect so much talent?

Coach Steve Hunt said, “We’re just really lucky that they all happen to live in Point Loma, and we had a great freshman team this year with a lot of light sailors.”

One lightweight is Maddy Brownsea, a 15-year-old girl who crewed for the team’s mainstay, senior Jake Reynolds on the A boat. Johannes McElvain, Grant Rickon and Kyle Sutter alternated on the B boat.

“It was hard,” Brownsea said, “with a lot of people working together.”

“We talk to other crews,” Brownsea said. “We tell them things about the conditions and stuff, and they tell us things. It helps everybody.”

Part of that involved the weekend conditions of light and shifty breeze that were unusual for Long Beach. Saturday had 2-6 knots and Sunday 6-8, made more difficult by a day that started with a brisk morning Santa Ana from the northeast before racing started and through the afternoon swung from northeast to west (140 degrees to 290) before settling in from the southwest.

The event was based at Alamitos Bay Yacht Club in Long Beach, hosted by the USC Sailing Team and organized by the US Sailing Center of Long Beach.

The US Sailing Center, once envisioned solely as a training site to help sailors fulfill their Olympic dreams, has developed into a center of training for sailors of every ability, from developmental clinics and hosting of world-class regattas to coaching area high schools and the USC collegiate sailing team. Programs also include Youth At-Risk activities, Learn-to-Sail classes for all ages and disabled sailing opportunities through the center’s own Disabled Sailing Association.