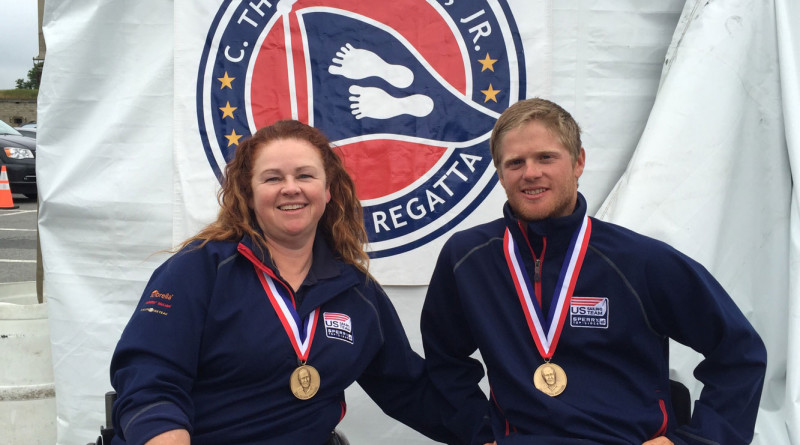 SAN DIEGO — It was during Ryan Porteous’ stay in the hospital, where he was recovering from a spinal cord injury that would render him partially paralyzed from the neck down at age 18, that he first set his sights on representing the United States in the SKUD 18 class at the 2016 Paralympic Games in Rio de Janeiro, Brazil. The Log caught up with 22-year-old Porteous during a break from his training with sailing partner, Maureen McKinnon. (McKinnon sailed with the late Nick Scandone at the 2008 Beijing Paralympic Games in the SKUD 18 class winning the first gold medal for the U.S. in sailing.)

When did you start racing?
My parents met while wind surfing. My brother and I were 8-years-old or so when we started junior sailing at Mission Bay Yacht Club. I always had a strong passion for water sports. I’m happiest on the water.

What drew you to sailing?
It’s a very fun physical sport and a mental game that requires tactics and strategy

How has rehabilitation been after the spinal cord injury?
I was in the hospital for 3 ½ months. I was partially paralyzed but regained full arm strength and I can walk short distances with a walker but I still use a wheelchair. I was back to sailing after being released from the hospital sailing with Challenged Sailors San Diego.

When did you set your sights on the Paralympics?
I probably started thinking about it when I was in the hospital. The head Paralympics coach paired me up with Maureen.

How has training been with Maureen?
Our training has mostly taken place on the East Coast in Newport, Rhode Island and Clearwater. It’s been good; we have good chemistry.

You’ve stated you approach your injury with optimism. Can you expand on that?
I look at the things I can do rather than what I can’t do. On the water I’m not thinking about my injury; I’m just thinking how to get the boat to sail faster and not dwelling on my injury.

What’s your ultimate racing goal?
I want to quality, represent the U.S. and medal. I would like a gold medal but right now I would just like to medal at Worlds (2015 IFDS Worlds) and qualify to compete in Rio.

To follow Team SKUD71 on its journey to the 2016 Paralympics, visit skud71.org.