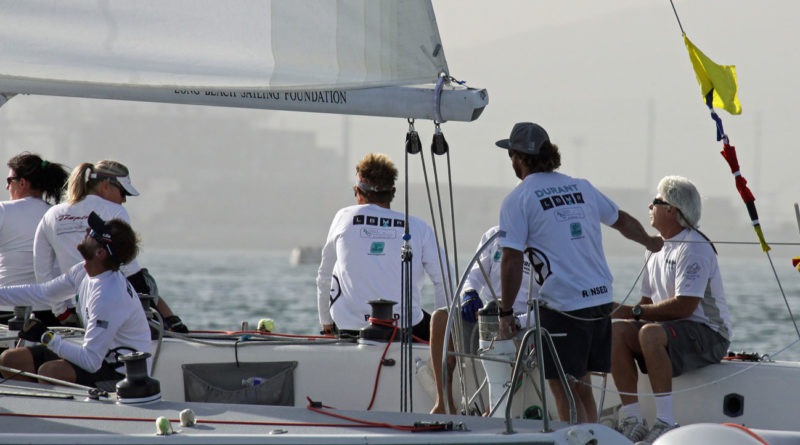 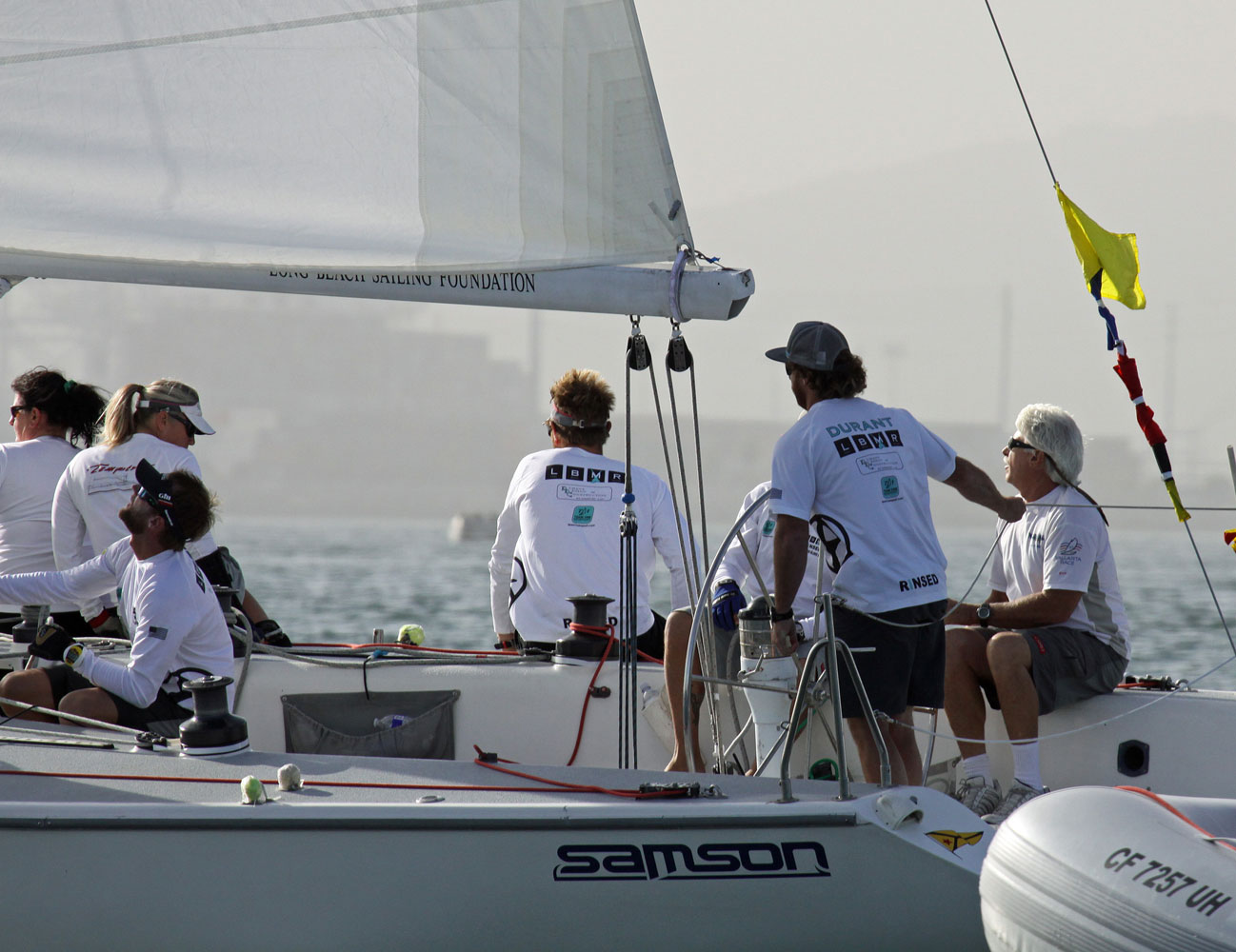 “We were really excited about the amount of breeze on the first day,” Young said. “The team I had was unreal. They were so great. And of course we had [veteran match racer] Steve Flam onboard as my tactician and he was perfect.

“A couple of guys on my crew hadn’t done match racing before so there was a steep learning curve for them, but the other key guys really made the difference,” he added.

“I’ve worked with other teams before, but on this team I knew everyone,” Young said. “They all keep their cool and don’t talk down to anyone and always help each other.”

The plan for the regatta was for a double round robin. That meant the race committee needed to complete 56 matches in two days. A challenging task in good weather conditions, but doable.

Saturday, Nov. 15 dawned with a light breeze coming from the south at 6 to 8 knots that built through the day. As the race committee proceeded through the flights it became clearly apparent they might not get all of the flights in before sunset at 4:49 p.m.

By shorting the course, all of the day’s 28 races were completed. The race committee breathed a sigh of relief since the forecast for Nov. 16 predicted howling Santa Ana winds that might mean a delay or abandonment of Sunday’s racing.

Well, the Santa Ana winds arrived on schedule but it looked like another low-pressure system was going to win out and allow for the typical southwestern Long Beach breezes.

But not knowing when, or if, this would happen, the race committee and the umpires got together and came up with an abbreviated schedule of semi-finals and then a petit finals and finals. Less matches to run especially since it didn’t look like we would get the first race off until after 1 p.m.

Because of only 2 to 3 knots of wind, the first race didn’t get going until around 2 p.m.

The wind did build briefly but ended up dying completely a bit after 4 p.m. at which point the race committee called it a day and ended the regatta, calculating finish positions based on competitor’s points in the semi finals.

Taking second place was Long Beach YC’s Port Captain, Bill Durant. Through the weekend’s racing, Durant was always in the hunt with Young, Hood and Law.

Durant had the privilege of having his son, Dustin Durant (currently ranked 67th in the world’s ISAF match race rankings) as his tactician.

“Dustin did a near perfect job for me, in spite of my senior moment which almost cost us the race to Shane,” Durant said.

“He assembled the crew and I have to give a big credit to my son. He kept after me to be aware of where other boats were and what I should be doing. I took a well-deserved beating from him.”

Third place in the regatta was Long Beach YC’s Rear Commodore Dave Hood who has a good amount of experience fleet racing the club’s Catalina 37s and, over the last few years, has been making big gains on the water in match racing skills and knowledge.

“I want to say how much we appreciate the race committee and the umpires this weekend,” Hood said. “And I want to congratulate Shane and Bill and thank them for participating in this regatta. We had eight great teams out there and had a couple of good days of racing.”

The event is named for Frank Butler, founder of Catalina Yachts, who in 1990 designed, built and donated the 11 Catalina 37s used for all the match races held at Long Beach YC. These same boats are also used for fleet race events and are available for team building and individual charters through the Long Beach Sailing Foundation.