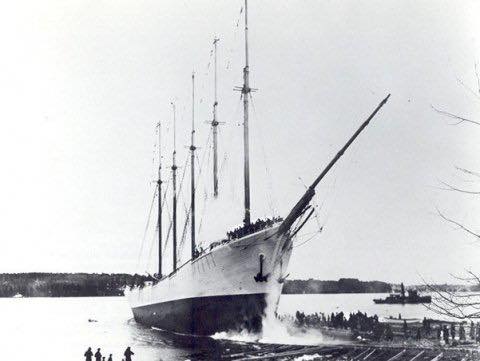 HATTERS, NORTH CAROLINA—In August 1920, a five-mast schooner picked up a load of coal in Norfolk, Virginia, and set sail with an experienced captain and a crew of 10 men bound for Rio de Janeiro. The crew however would not return and what happened to them remains a mystery to this day and one of the most written-about maritime mysteries of the 20th century.

Jan. 31 marked the 100-year anniversary of the Carroll A. Deering running aground with not a soul on board – allegedly besides a six-toed cat – in the Outer Banks city of Hatteras, North Carolina.

According to the National Parks Foundation (NPF), the Carroll A. Deering departed on Aug. 22, 1920, and although Captain William H. Merritt fell ill a few days later and had to be replaced by the hastily-recruited Captain W. B. Wormell, the ship delivered its cargo on schedule and set sail to return in December.

“A lightship keeper named Captain Jacobson aboard the Cape Lookout Lightship in North Carolina sighted the vessel bound for its home port on Jan. 29, 1921,” the NPF wrote in a blog post on its website. “The Carrol A. Deering hailed the lightship, and an unidentified crewman reported that the ship had lost its anchors. Captain Jacobson took note of this but was unable to report it due to his radio being out. He would later describe the crew of the Carroll A. Deering ‘milling around’ suspiciously on the foredeck of the ship.”

The morning of Jan. 31, 1921, C.P. Brady of the Cape Hatteras Coast Guard Station spied the schooner aground on Diamond Shoals, its sails still set and its lifeboats missing. Rough waters kept surf boats from reaching the wreck until Feb. 4, 1921. When crews were able to board the Carroll A. Deering, not a soul was found onboard but a gray, six-toed cat was found in good condition and taken ashore, according to the Virginia Pilot. It is believed the cat left a line of six-toed progeny on the Outer Banks, including one that lives today around the Hatteras ferry docks, historian Danny Couch told the Virginia Pilot.

Gone with the crew were also personal belongings and key navigational equipment, according to the NPF.

Despite an exhaustive investigation by the FBI, no trace of the crew or the ship’s logs has ever been uncovered. Accounts of the crew’s alleged dissatisfaction with new captain W. B. Wormell have led to speculation that a mutiny may have occurred, while the FBI’s investigation turned up leads ranging from Bolshevik-sympathizing pirates to rum-running gangsters, all of which turned out to be dead ends, according to NPF.

Speculation continues to this day, and no satisfactory explanation for the crew’s disappearance has ever been proven.

One thought on “100 Years Later, Ghost Ship with Only a Six-Toed Cat Onboard Remains a Mystery”