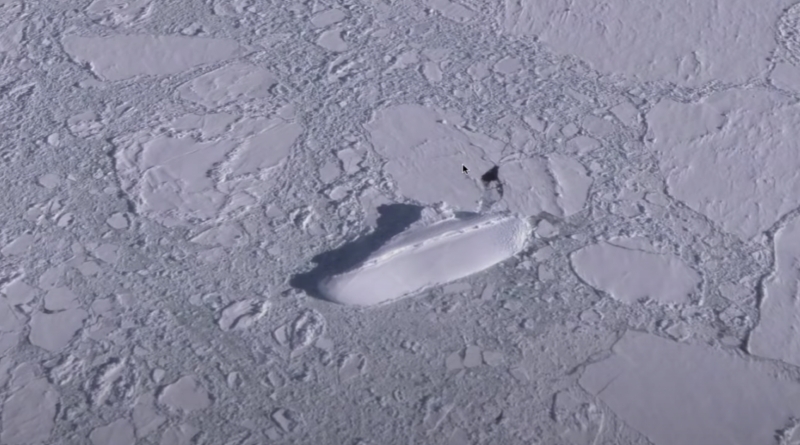 ANTARCTICA—All kinds of mysterious things have been spotted on Google Earth and enthusiasts have scoured the 3D renderings from the computer program for hidden treasures satellites may have picked up. One such recent discovery was a snow-covered object or iceberg, which some believe is actually a 400-foot ship.

A clip of the strange find was uploaded to YouTube on Aug. 7 by user MrMBB333, a self-described watchman who says he monitors everything from the seafloor to the cosmos. He regularly discusses unusual findings on Google Earth and elsewhere, often from tips sent in by viewers.

In the YouTube video posted Aug. 7, he highlights a large chunk of ice rising above the snowy landscape. When Google Earth is switched to 3D mode, the ice ressembles a ship.

“You look down on it and it looks like the outline of a ship,” MrMBB333 told his 400,000 YouTube subscribers in the video.

The YouTuber explains the ‘ice ship’ sits just below New Zealand, around 100 miles off the shore of Antarctica. The snow-covered object bears a resemblance to a cruiseliner with details resembling chimneys and a line of windows.

“An ice ship if you want to call it – a 400-foot yacht just sitting there off the coast of Antarctica,” the YouTuber says in the video.

The discovery has sparked a wave of conspiracy theories in the comments, with some claiming the “boat” is linked to a secret Nazi base in the Arctic, or is there to transport world leaders in times of global crisis.

“I was told a couple of years ago that there are ships built underground somewhere on upper east coast (like the ones in the movie 2012) to save the rich and powerful when canary islands get hit with massive earthquake that will take out east coast,” one commenter wrote.

For now, it is anyone’s guess what the object is – a ship, iceberg or something else.

The video can be watched at https://bit.ly/3aIpITx.