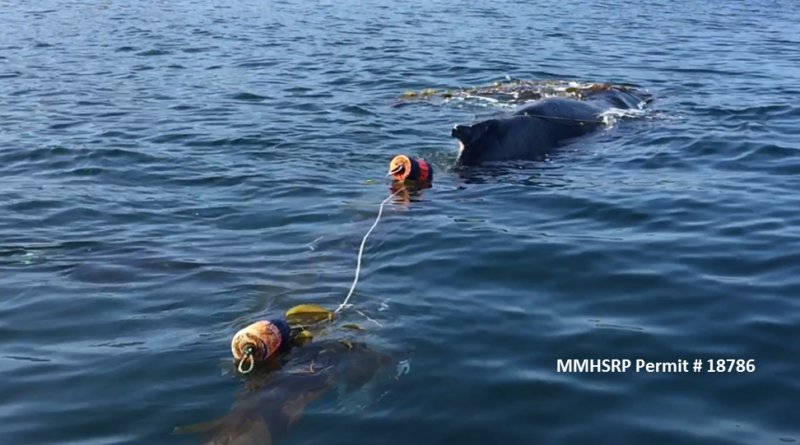 NOAA reports Dungeness crab trap entanglements have doubled in the past couple years.

STATEWIDE ― The number of whales seen entangled in fishing gear off the West Coast have been increasing in recent years, with 61 reported in 2015 and 71 in 2016.

Dan Lawson, NOAA Fisheries Biologist for the West Coast Region Protected Resources Division, explained the recent increase in entanglements may actually be due to the California Dungeness crab fishery opening later in the year.

The fishery was closed last year and did not open until April 1, Lawson pointed out, which normally would open in December on the West Coast.

California Department of Fish and Wildlife (DFW) closed the Dungeness crab fishery in 2016 due to high levels of domoic acid.

Once DFW allowed the fishery to open again, the late season opening coincided with whales showing up in large numbers.

“We have had an increase of whales, whale densities closer to shore the last couple years,” Justin Viezbicke, California Stranding Network Coordinator for NOAA Fisheries, stated. “We’ve had increased fishing pressures that have overlapped with some of those increased densities of whales.”

Whales have been lingering off the coast of California spending more time here rather than migrating, according to Lawson.

Certain environmental factors might be the reason whales are spending more time off the California coast.

“Whales (primarily humpback whales) [are] responding to how their prey has been distributed in recent years which has been dramatically influenced by environmental stuff like warmer water, reduced upwelling, wind/current patterns, and so forth,” Lawson explained. “The whales are likely following their food around (krill, sardines/anchovies), and there seem to have been conditions that have concentrated more whales into fewer areas based on limited food availability, which has unfortunately been areas of concentrated fishing effort too.”

Fishing Gear and Other Debris

Entanglements are not just affecting whales, and the culprit is not always fishing gear.

“We’ve seen an increase in sightings of both large whales that are entangled and small pinnipeds,” Viezbicke stated.

Sea lions and sea turtles are also getting tangled, not just in fishing lines but plastic litter as well.

“We have been seeing not only an increase in fishing line entanglement but in plastic bag entanglements and ingestions,” Higuchi continued.

In fact, the recent rescue efforts of a sea lion found wounded in Dana Point Harbor had fishing lines wrapped around him, which likely impeded his ability to escape a shark attack. The sea lion had to be euthanized.

Higuchi attributes entanglements to overfishing and people not being responsible enough to properly discard trash. She emphasizes the importance of being responsible consumers by recycling, reusing and picking up after oneself. She also stressed the need for policy changes for responsible fishing; however, saying these changes need to start at the bottom.

Lawson also said people need to practice responsible fishing, and the issue is not just with commercial fishing.

“This is not all a commercial fishing problem. We have actually been able to identify recreational fishing gear [as well],” Lawson said.

“Being mindful of best practices particularly minimizing the amount of slack line and overall profile of gear” are examples of responsible fishing, Lawson also mentioned.

Lawson confirmed sea lions are still being targeted by certain anglers frustrated with pinnipeds snatching their catch or bait.

“That’s something that has not changed. It’s probably only increased,” Lawson mentioned when asked. “We still get a lot of mammals reported with gunshot wounds that certainly suggest some intentional encounters.

“I had to talk to our law enforcement to see how much they’re able to investigate those things, [since] those sea lions are still protected. The protection isn’t going away anytime soon,” Lawson continued.

The NOAA has been looking at ways to further protect marine life, but Lawson mentioned this would ultimately be up to state management authorities.

Lawson also mentioned discussions have been held regarding possible changes to fishing gear as well as looking at what’s being done around the world.

More sightings of entangled mammals have been reported due to more awareness on the issue.

“I think we’ve done a pretty significant effort in outreach to ocean users, boaters, harbors and basically people out on the water to give them information on how to report, who to report to, what to report, so we definitely have an increase of knowledge out there for the ocean users to give us that information,” Viezbicke stated.

Reporting distressed or entangled mammals will only be helpful with the most detailed information as possible. Location is important, but so is a description of the mammal and the gear attached.

This is a good time to raise awareness as whales will begin to migrate south again beginning in late fall and into winter, Lawson maintained.

Photos and video of the entangled whale, while maintaining a safe distance, are helpful as well.

However, “we do not want anyone engaging in any efforts to physically remove gear, Lawson stated. “A very well trained fisherman in Canada was killed trying to disentangle a whale earlier this year. It’s never a safe thing for even a trained responder to do, much less for the public.”

Calling In For Help

Boaters and others on the water who see an entangled whale can call the hotline number. The number to call and report a whale entanglement on the West Coast is 1-877-SOS-WHALE (1-877-767-9425). This phone number is for entangled whales only.

Whales spotted near beaches or in harbors which appear to be lost but not injured should be reported to local authorities, such as harbormasters or the coast guard, “so everybody in the water can be advised to take special care in those areas,” Lawson stated. “Those are typically younger animals, so they are probably inexperienced in the migration pattern [and], for lack of a better word, lost. They’re just trying to find their way around.”

The United States Coast Guard can be reached on VHF Ch-16 to report sightings of wayward whales.

Discovering a sea lion or other marine mammal in distress can be reported to the appropriate rehab facility in the particular region.

“The first thing is to keep your distance, we do not want to spook or stress the animal, and observe from a distance. Call to report the animal and take a picture (from a distance of 50 feet),” Hyguchi advised.

Contact the marine and wildlife rescue facility in your area, if you spot a sea lion or marine mammal in distress. The facilities, from San Diego to Santa Barbara, are as follows: