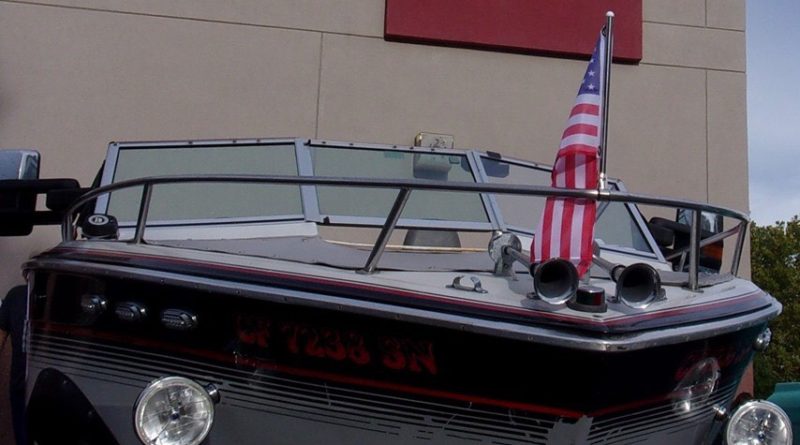 A Pensacola, Florida man merged an old boat and a car to make a sweet ride.

PENSACOLA, Florida—Beep beep, boat, wait no, car coming through. A Florida man, his first mate and his boat car have been turning heads in Pensacola, Florida this year. Made from a decommissioned boat and the bottom half of a Ford Expedition SUV, Gerry Moore’s boat car is 100 percent street legal. While it will get you around on dry land, it does not float and won’t get far on the water.

The boat car has the body of a 1986 Chris Craft Scorpion 210 but the wheels, bottom frame, seats and steering wheel of the Ford. Moore, according to Pensacola News Journal, sawed off the top half of his Ford Expedition and replaced it with the top half of the Chris Craft, an old boat he had sitting in his backyard for years. It seats eight people and gets about 20 miles to the gallon.

Moore has been hitting the streets of Pensacola since about February with his wife, Karen Moore, who is also this boat’s first mate.

Moore told PNJ he got the idea for the boat car from a car show in Mississippi late last year, where he saw a similar, smaller car and boat hybrid. He went on to tell PNJ he’d been considering refurbishing the old Chris Craft he had sitting in his backyard but never got around to spending the money to do so. Moore told PNJ he grew up fixing cars with his dad and completed the project in about six weeks.

Moore often wears a captain hat while behind the wheel and sometimes even gives them out to kids who show interest in the car. The boat car draws a lot of attention from people of all ages and Moore always lets people pose for photos with the car. He shares lots of those moments on the Boat Car Facebook page.