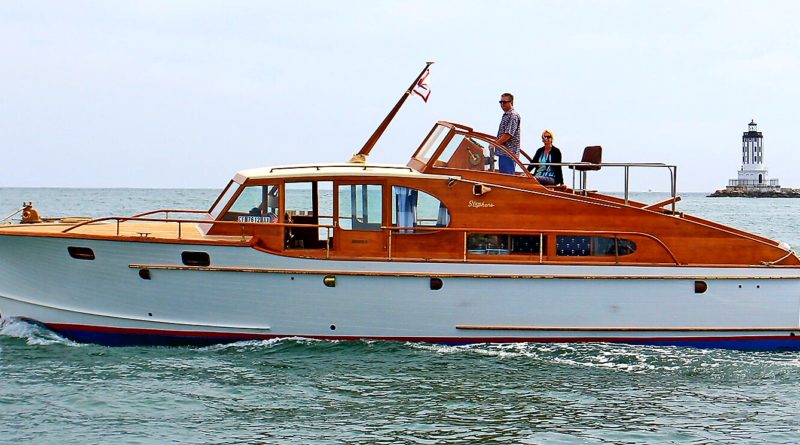 In this feature, The Log looks at remarkable boats — sail and power — that continue to turn heads in Southern California harbors.

The Back Story: Running across a Stephen’s Bros. collectible like Sea Boarder is sure to elicit a strong reaction from lovers of collectible wooden boats, but hers is a truly incredible story of coincidence that might have even the staunchest skeptic scratching his head. William A. Thompson, a financier who started Seaboard Finance Company in 1927, commissioned the tri-cabin cruiser in 1950. Named Sea Boarder as a pun on his business name, Thompson kept her safe at his family home across the way from Balboa Yacht Club. Owner Jim Kroeger, Thompson’s grandson, Classic Yacht Association (CYA) member and wooden boat enthusiast, prefers to keep Sea Boarder free of too many upgrades just as she would have been on the waters in 1951 when she was first set sail.

First Sale & Renovations: Sea Boarder was sold in 1972 and disappeared from existence for more than four decades. “We figured she had been chopped up for firewood,” Kroeger, who mentions spending years wondering what had happened to his beloved family boat, said. Kroeger had no idea Sea Boarder was undergoing a complete restoration in a Stockton area barn. A boater in Huntington Beach would eventually take ownership of Sea Boarder.

A case of a familiar vessel called Revelry: Kroeger and his significant other, Janet Beggs, who is also a member of CYA, attended a wooden boat festival and encountered a boat named Revelry. The similarities to Kroeger’s grandfather’s boat were striking. Both ran over to further inspect the vessel and what looked like Sea Boarder – could it be her? Initially, the removed bunk beds and the matter that the helm had been changed from the starboard side to the port side to open the galley threw Kroeger off. Yet a familiar feeling lingered. Revelry, as luck would have it, was confirmed to be Sea Boarder. In an even bigger strike of luck, the previous owner put Sea Boarder up for sale afterwards inviting Kroeger and Beggs back at any time to come aboard.

The owner, in 2015, had a buyer in Seattle but chose to sell her for a reasonable price to Kroeger. “It was almost like an act of divine intervention that she came back,” Kroeger recalled. “I’m sure my grandfather is laughing at me somewhere about how much money and maintenance I’ve had to put into her!”

The Mystery of Sea Boarder’s Sister Ship: Sea Boarder is one of only two boats of her kind. Somewhere Sea Boarder may have an estranged sister. Kroeger has gone to great lengths to locate the sister ship, but to no avail.

Home at Long Last: Kroeger chose to keep Sea Boarder at Huntington Harbor, the dock she called home after the previous owner purchased her. Those interested in viewing this spectacular yacht can attend the Newport Beach Wooden Boat Festival in June.