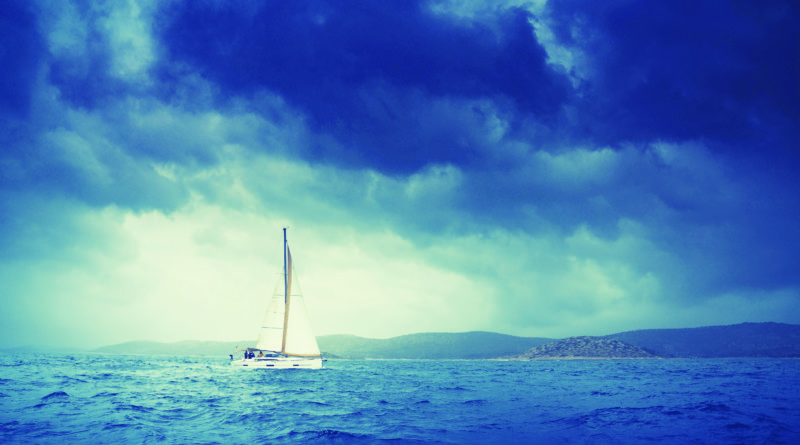 SAN DIEGO—Have you noticed rain driven by significant winds affects your boat differently from rain or wind alone? Each singly can be benign, providing a gentle dousing or delightfully filled sails, but rain and wind together can multiply their effect, creating a damaging double whammy.

I originally noticed this when we had our first winter drenching after we bought Burgundy and brought her to San Diego. It was Thanksgiving weekend, our initial effort to introduce our landlubber cats to the boat after finally finishing our “cat proofing” efforts and adding an array of feline paraphernalia for their safety, comfort and entertainment.

Then the storm hit, light rain at first followed by waves of wind-driven torrents, demonstrating previously undiscovered leaks. Our two terrorized cats huddled in the master head, upset by the noise and water pouring through the master stateroom’s escape hatch, saturating everything underneath, including the carpet and freshly reupholstered sofa.

Later, as I prepared our Thanksgiving dinner, I discovered water sprinkled over the cook-top. The galley windows weren’t leaking, but rain apparently blew in through the overhead vent.

What caused the rain’s intrusions? No water had entered in those places when the boat was washed or during previous rains. But we also hadn’t experienced heavy rains such as we’ve also experienced recently, nor wind-driven rains on Burgundy. These together had overwhelmed the anti-leak traps on the deck hatches and vents, which normally prevent water passing into the interior.

Once the rain let up Arv flushed the clogged traps and cleaned the double gasket, enabling him to reseal the escape hatch, preventing further leakage. The cook-top leak recurs only when the wind blows rain through the U-shaped water trap in the vent line.

Wind can drive water through a tiny crack or marginally leaky hatch along unexpected pathways, such as a beam, conduit or hose, and show up in unexpected places. I remember a befuddling steady drip, drip, drip from a wall-mounted cabinet in our master stateroom, nowhere near a likely source.

Where, oh where had that originated? Arv eventually found the leak, half a boat-length away, but it was tricky to locate because the conventional tool for isolating leaks – flooding a likely area with a hose – doesn’t work when the leak shows up only when strong winds accompany rain.

Wind alone of course can do major damage to a boat. After every storm or period of high winds Arv checks all our canvas. Often he’s found our aging bimini with wind-ripped seams or zippers and newly developed tears in the fabric. On neighboring boats we’ve noticed canvas partially blown off, including a bimini flapping in the wind, barely clinging to one support, and another boat’s dinghy cover with ripped tie-downs, wrapped around the bow pulpit. If you leave anything on the deck, make sure it’s well secured or heavy enough to resist the force of strong winds. Check that your antenna supports are sturdy and fishing equipment well stowed or tied down.

Winds can also distort and stretch your mooring lines. During a recent foray to another marina our boat’s lines balanced her nicely in her slip. When I returned to the boat a few days later I noticed our stern line much looser than I’d left it. Initially I thought someone had loosened it, but after experiencing the constant breezes and wave action in the adjacent channel, I realized wind and waves were the culprits, stretching the line, not humans. I quickly readjusted our lines.

We’ve learned to monitor our boat frequently during storm season, checking for water and wind damage after storms, repairing and adjusting as needed.