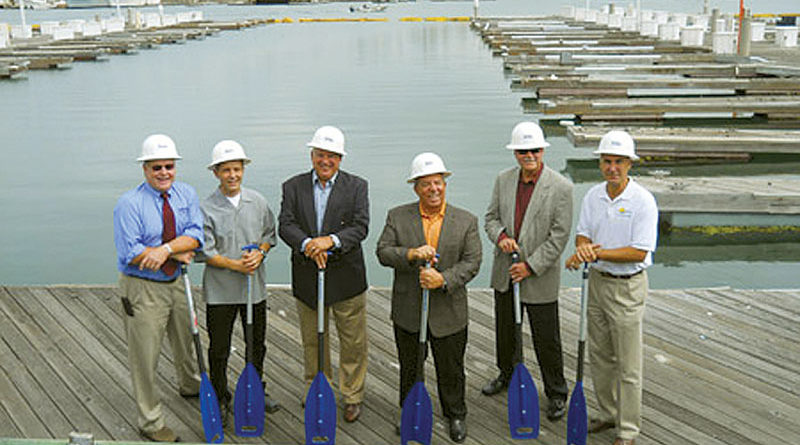 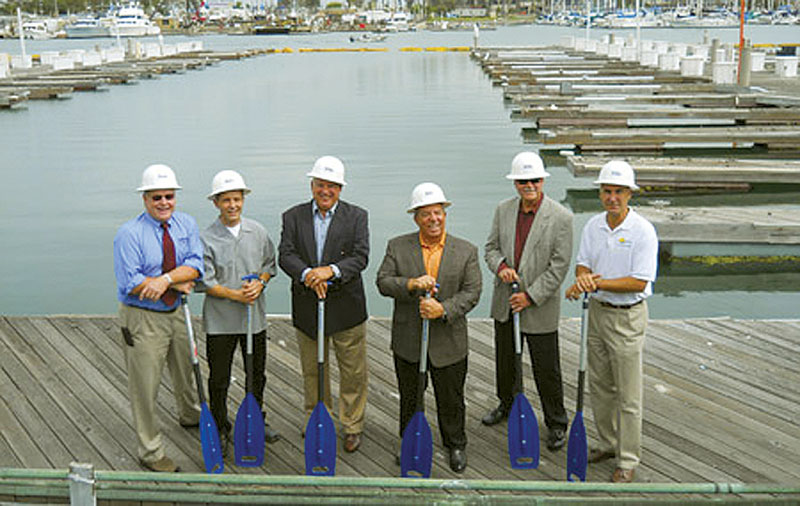 LONG BEACH — While the smell was a bit worse than expected and lingered a few days longer than Alamitos Bay boaters would have liked, the demolition of the deteriorating docks in Alamitos Bay Marina was a welcome sight for those wondering if the long-delayed rebuild project would ever get under way.

With the official groundbreaking taking place Sept. 17, the planned $98 million marina rebuild began with removal of the 1950s-era docks and piles in Basin 4 — home of the Long Beach Yacht Club slips — and dredging of the area to its original design depth. But, with the removal of the old docks and the dredging of the bay floor, a foul odor was emitted that caught construction workers and nearby boaters off guard.

“There was a very strong odor for about three weeks,” said Long Beach Marine Bureau manager Mark Sandoval. “The dock removal took a little bit longer than we thought it would.” The smell subsided following the removal of the docks and piles Sept. 30, and dredging reached completion Nov. 8.

Pile driving began Nov. 9, and the new concrete docks — most of which have already been poured and cured — will be installed over the next three months. With the arrival of the new Bellingham Marine-built docks comes the test of fitting together each section into the planned design.

“Despite hitting a few rocks we didn’t anticipate during pile driving, we’re moving right along — and I’m happy with the progress so far,” Sandoval said, adding that he expects completion of Phase 1 in March 2012.

While many Alamitos Bay boaters were happy to see the rebuild has finally reached the construction phase after years of planning and delays, funding for future phases remains a concern, with additional funds still needed for the rebuilding of basins 2 through 7.

The first phase is expected to cost $11.8 million, and will be funded by a $6.8 million Cal Boating loan and $5 million from unallocated Marina Fund dollars.

To recover the money for the loan, the Long Beach Marine Advisory Commission voted to increase slip fees for Alamitos Bay boaters by 4.4 percent, starting in October.

“We recognize that fee increases are never popular, particularly in light of the current economic climate in the country, and we have held rates flat for three years,” Sandoval wrote in a statement. “We have done all we can to keep this increase as low as possible.”

On Nov. 29, Sandoval said the Bureau was putting a financing plan together for Phase 2 of the project, which will rebuild docks in Basin 1, along the south end of North Marina Drive. The cost is estimated at $18 million, with $12.1 million in funding coming from an additional Cal Boating loan, but the remaining $5.9 million needed for the rebuild has yet to be funded.

Work on basins 2 (between the Alamitos Bay marine fuel dock and Seal Beach Yacht Club) and 3 (Between Joe’s Crab Shack and East Second Street), is estimated to cost $20 million and is only 50-percent funded. Funding for basins 5, 6, and 7 has not yet been earmarked.

While there is time for additional funding sources to be located — Basin 2 work is tentatively planned to be completed by June 2014, and Basin 3 is scheduled for February 2015 — Long Beach boaters are concerned that the additional funding necessary will mean future slip fee increases.

Sandoval said that additional slip fee increases have not been decided upon, but they would be determined depending on how the marina rebuild project gets financed.

Alamitos Bay slip tenants were informed that a slip fee increase would be coming with the rebuild, but Long Beach Marine Boat Owners Association (LBMBOA) president Carl Kirnbauer noted that multiple increases were not discussed.

“We have been aware that a slip fee increase would be needed to get the initial rebuild process going,” Kirnbauer wrote in a statement. “However, I understood that the increased revenue from the new slip fee mix (since the new larger slips would generate substantially increased marina revenues) coupled with substantial expense reductions would generate enough income to make further slip fee increases unnecessary. This no longer appears to be true,” Kirnbauer wrote.

While the rebuild plan calls for dock replacement, restroom renovations and parking lot upgrades to the remaining basins 2 through 7, Sandoval pointed out that the docks are the components that are most in need of immediate repair, and any funding available would be used to replace the aging wooden structures before money would be used for other upgrades.

Upon completion of the marina project, Alamitos Bay will contain 605 fewer slips, losing many in the 20- to 30-foot range, while gaining slips in the 35- to 50-foot range. Alamitos Bay’s current 1,967-slip total will be reduced to 1,646.