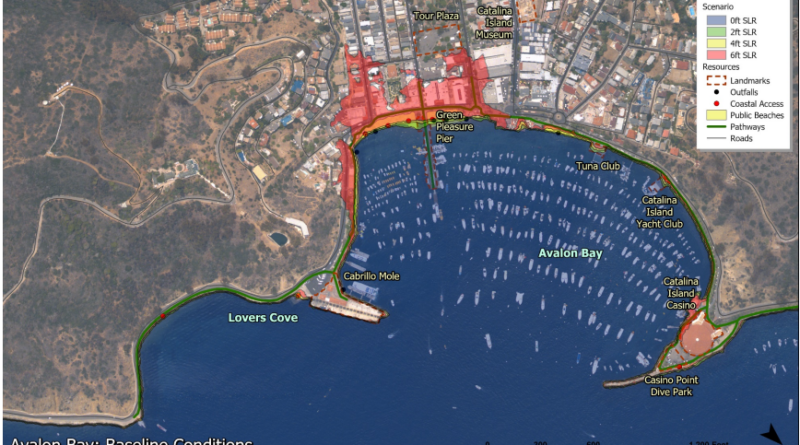 According to the report, public beaches below the seawalls in Avalon Bay and Descanso Bay are projected to become completely submerged under high tide conditions with 4 feet of SLR.

According to the report, if a 100-year storm were to hit under 6 feet of SLR, flooding would cover a majority of Catalina Island Casino.

AVALON—Potential impacts of sea level rise in Avalon were laid out in a report accepted by the City Council on Nov.5.

“Understanding potential impacts to these resources as coastal hazards continue to evolve is a crucial step in enhancing the resilience of the City to future hazard conditions,” the Sea Level Rise Vulnerability Assessment prepared for the city of Avalon by Moffatt & Nichol stated.

Potential timing for SLR values used in the study were based on the probabilistic projections for Los Angeles and included in the 2018 California Ocean Protection Council (OPC) SLR guidance. The OPC Science Advisory Taskforce projects the “likely range” of SLR between 0.5 to 1.0 feet to happen in the 2050 time horizon and the likely range of 1.3 to 3.2 feet SLR at the 2100 time horizon. Based on OPC guidance, 4 feet to 6 feet of SLR is unlikely to occur until the end of the century or beyond.

According to the report prepared for the city, a key component of SLR vulnerability is the potential for increased hazard impacts at the Cabrillo Mole, the primary point of entry for visitors arriving by boat.

A 100-year wave crest elevations under the 4 feet and 6 feet SLR scenarios are projected to result in significantly more flooding of the deck and would likely result in major damage to the buildings and other amenities located on top of the mole.

However the report prepared for the city stated: “There would likely be a new or significantly modified wharf structure in place before sea level rise exceeds 4 feet.”

The report prepared for the city described the impact of projected non-storm flood impact across Avalon as minimal with 2 feet of SLR, which would reduce some the sandy beach areas in the low-lying areas of Descanso Bay, Avalon Bay, and Pebbly Beach Road. Public beaches below the seawalls in Avalon Bay and Descanso Bay are projected to become completely submerged under high tide conditions with 4 feet of SLR.

“SLR hazards are also likely to disrupt the delivery of critical services until flood conditions subside or necessary repairs can be made,” the report prepared for the city stated. “This is especially true for those structures along the immediate shoreline that are projected to become subject to frequent tidal flooding and damage during extreme events, such as the Avalon Freight Services facility.”

Wave overtopping is projected to extend above the coastal seawall and into recreational use areas under all SLR scenarios examined under 100-year storm conditions in Descanso Bay. Storm flooding is projected to increase significantly under the 4-foot SLR scenario, covering the entirety of the sandy beach area above the seawall and impacting major coastal structures such as the Descanso Beach Club. Pile supported structures such as the Catalina Island Yacht Club, Tuna Club, and Green Pleasure Pier are also susceptible to increased wave action.

According to the report prepared for the city, if a 100-year storm were to hit under 6 feet of SLR, flooding would cover a majority of Catalina Island Casino.

The report prepared for the city said exposure to daily tidal fluctuations and extreme storm events at all mooring and boating infrastructure located throughout Avalon Bay, Descanso Bay and Hamilton Cove is not expected to change with SLR, except that the typical tidal range and extreme storm events will occur at higher elevations. As sea levels rise, the mooring lines will need to be modified to account for higher water levels, according to the report prepared for the city.

The report prepared for the city said flood hazards are the primary driver of coastal SLR vulnerability within the city, but additional hazards include erosion, shoreline migration, and changes in groundwater depth.

Avalon’s report will be used to create future planning efforts and adaptation measures. At the Dec. 3 City Council meeting, council members voted to authorize the city manager to enter into a contract with Moffat & Nichol to develop a comprehensive Sea Level Rise and Climate Change Adaptation Plan for the Transportation Infrastructure.

“These adaptation planning goals and strategies will be evaluated in more detail and refined with input from the community to inform an Adaptation Plan that outlines specific policies, programs and projects that can be implemented to mitigate the impacts identified in this vulnerability assessment,” the report prepared for the city said.

The full assessment can be found at www.cityofavalon.com/SLR.