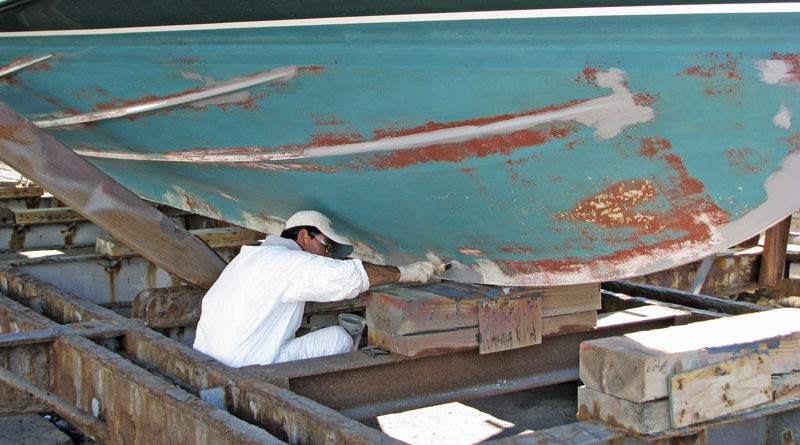 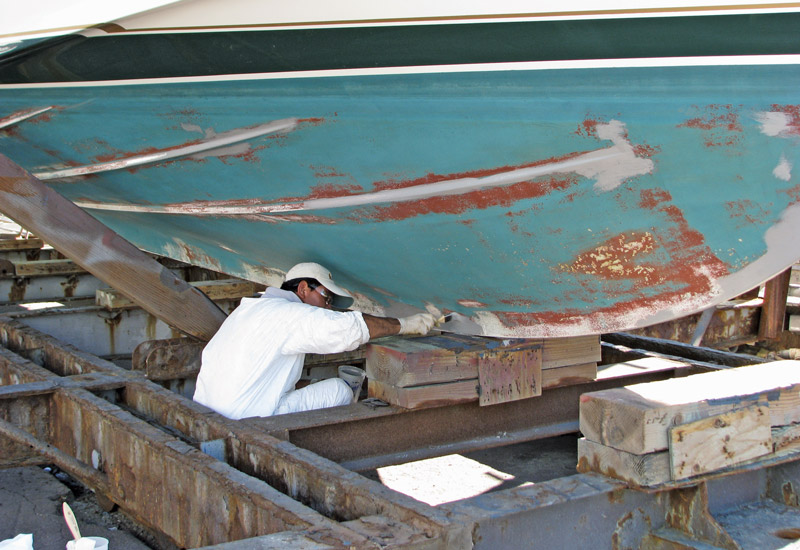 If you are a recreational boater and would like to share your perspectives about TMDL and copper reduction, please contact the writer via email at parimal@thelog.com

Change is not always easy, especially when those who are required to change believe there is nothing wrong with the status quo and the alternative presents more questions than answers. Such could be the case with recreational boaters who are being asked in some aquatic corners to use nontoxic paints on their hulls instead of copper.

One strategy state officials have devised to limit copper exposure in local waterways is Total Maximum Daily Load, or TMDL. Recreational boaters at the Port of San Diego were the first to be required to comply with a state mandated “pollution budget.”

Some recreational boaters questioned whether there is any evidence demonstrating copper as the main culprit in water pollution. Others claim it is too expensive to switch from copper-based hull paints to the recommended alternatives. There are also some circles who accuse the government of hypocrisy, claiming large U.S. Navy ships do not have to meet TMDL requirements despite using more copper than small crafts.

Also, copper-based hull paint is legal in California if it is registered as a pesticide.

How expensive is it to convert? What practical alternatives exist? Is copper the main culprit?

TMDL is rooted in an investigation pursuant to the California Water Code and Senate Bill 315 (SB 315) more than a decade ago to identify incentives for recreational boaters in San Diego Bay to transition from copper-based antifouling paints to nontoxic coatings. The investigation resulted in creation of the San Diego Advisory Committee for Environmentally Superior Antifouling Paints and The Carson Report.

Published in 2002, The Carson Report analyzed the economic impacts and incentives of transitioning from copper to nontoxic paints for the entire bay.

According to the California Regional Water Quality Control Board, the report “identified nontoxic alternatives, compared the costs of using these alternatives to the cost of using traditional copper-based antifouling paint and identified economic incentives for transitioning to the use of alternatives.”

Richard Carson, a professor at University of California, San Diego, who spearheaded the 2002 report, said about 93 percent of the dissolved copper found in Shelter Island was attributable to antifouling paints.

The report predicted an average boater would be willing to spend about $500 to transition from copper to nontoxic paints.

“Many boat owners appear to place little or no independent value on the non-toxic nature of alternative hull coatings,” the report stated. “Without a strong cost advantage, the use of copper paint will never be voluntarily phased out. The most effective instrument for currently moving boat owners to adopt nontoxic paints appears to be the presence of a future ban on the use of copper.”

A technical report was published by the California Regional Water Quality Control Board, San Diego Region, in February 2005 detailing levels of copper in Shelter Island and stated nontoxic epoxy coatings were more effective than copper-based antifouling paints in the long run.

A new boat owner, for example, might only spend an additional $1,726 during the 30-year life of his or her vessel to use a nontoxic coating on the hull instead of copper. The report also stated boats with copper-based antifouling paints need to be stripped every sixth application, whereas hulls with nontoxic coating do not need to be stripped in the first 30 to 60 years of the boat’s life. (See accompanying charts.)

Michael Leneman, a marine geologist and oceanographer who owns Multi Marine in Marina del Rey, did not see any financial incentive for recreational boaters to switch from copper to alternative hull paints. The UCLA sailing instructor also teaches “Oceanography for Boaters” and has sold or distributed marine supplies, epoxies and paints through his business.

“The finances are pretty tough. Each boat is going to have to strip all their paint off. That’s a pricey process,” Leneman said, adding a boater would have to pay boatyards an hourly fee plus the cost of stripping.

Boatyards would also have to pay for disposing the stripped copper paint, a cost they would hand off to boaters.

“The cost of removing bottom paint alone exceeds the value of the boat. This is going to be a deal breaker [for middle class boat owners],” Leneman said.

A letter issued and distributed to boaters by The Concerned Citizens of Marina del Rey in May 2014 said county and state officials underestimated how much it would coast for boaters to switch to non-copper bottom paints. Specifically, the letter said an owner of a 40-foot boat could cost about $8,000 to restripe.

Leigh Johnson, coastal resources advisor with the University of California Agriculture and Natural Resources (UCANR) said a coating that is durable, easy to clean and long-lasting is more likely to make long-term financial sense to a recreational boater. However, the stories of boaters who successfully switched from copper to an alternative hull paint are either anecdotal or few and far between, Johnson said.

Is copper really the enemy?

Johnson spent more than a decade studying TMDL and interacting with boaters, government officials and scientists. During her chat with The Log, she referenced many of her academic papers addressing specific issues concerning copper reduction and TMDL.

In 2012, Johnson and two others published “Crossing Boundaries: Managing Invasive Species and Water Quality Risks for Coastal Boat Hulls in California and Baja California.” The report cited dozens of published studies from the 1980s and 1990s that claimed copper from antifouling paints was a toxic matter in some California marinas.

“Research has indicated that passive leaching of copper from antifouling paints contributes to elevated copper levels found in some California coastal boat basins,” Johnson and her colleagues stated in their report, adding the development and growth of organisms such as mussels, oysters, scallops, crabs and sea urchins were negatively impacted by copper exposure.

“Copper has been shown to have adverse effects on salmon sensory processes,” Johnson and her colleagues added. “It also causes problems in the gills, kidneys, tissues and sensory receptors of fish in general. Thus, exposure to levels of dissolved copper, which are addressed by TMDL programs for some of California’s coastal boat basins, may impair and sometimes kill species that occur in marina water.”

As part of their educational campaign, Port of San Diego staff advocated boaters to use non-biocide paints by outlining the impacts of biocides on water quality and marine life.

“Most antifouling hull paints are made with copper, which acts as a biocide. This means that it can slow or stop the growth of living things,” port staff stated. “This biocide can build up in small marine creatures, slowing or altering their development. Disturbances in the food chain can ultimately affect local wildlife such as fish, pelicans and sea lions.”

“It doesn’t make sense to me. If copper was so dangerous, why not make the military [participate in copper reduction programs],” Leneman said. “I’ve never seen marine life [in Marina del Rey] more abundant than now. There are more sea lions, more dolphins, more anchovies and small fish.”

He added some alternative hull paint products are making progress, but “the jury is still out” on whether any of them work long-term. Just the same, Leneman said there is no one-size-fits-all solution. Instead, marinas have to be studied on a case-by-case basis, since there are biocides that work in one area but are not effective in others.

Gregory Schem, a boater who served on the Blue Ribbon Task Force for the California Marine Life Protection Act and worked in the boat yard and marina business for 15 years, published a study addressing whether copper is actually a problem.

“The toxicity of copper is directly related to how much is available to an organism; this is called bio-availability,” he said. “At low levels, copper is a necessary element for healthy organisms, however, at too high a concentration it becomes toxic. Where things get tricky is that whereas bio-availability is simple to determine in clean freshwater, it becomes more difficult to determine in sea water unless site-specific data is taken into consideration.”

He added copper could be toxic in close proximity to a boat’s hull but becomes increasingly non-toxic as it falls away.

Schem also advocated for studying copper toxicity in marinas on a case-by-case basis.

“Unless a practical and measured approach is taken, severe socio-economic impacts to the boating community in terms of loss of recreation, decline in business, and un-intended environmental damage will occur. These impacts, particularly on recreational uses could eclipse any benefits which might be realized by the overprotection from these substances if not implemented properly,” he said. “Careful consideration must be given to utilizing a measured approach such as allowing natural degradation, algae biosorption and low copper bottom paints to reach more realistic TMDL goals over rational time periods.”

It could be a while before any clarity, uniformity or acceptance is established. In the meantime, The Log will conclude its current series of articles on copper and TMDL in its March 27 issue, analyzing potential options and incorporating additional perspectives from boat owners, industry insiders, marina operators and professionals.

The California Regional Water Quality Control Board (San Diego Region) issued a technical report on Total Maximum Daily
Load in Shelter Island in February 2005 and provided a cost estimate for boaters who use copper vs. nontoxic paints.

Copper-Based Antifouling Paints
Initially less expensive to apply ($30 per foot)
Do not need to be cleaned as often (14 times per year)
Need to be re-applied more often (every 2.5 years)
Need to be stripped about every sixth application (every 15 years assuming paint is reapplied every 2.5 years)