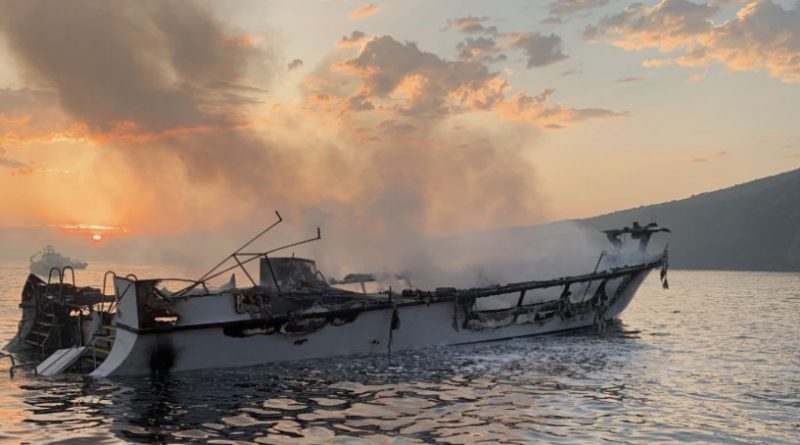 The indictment was filed Dec. 1 and alleges Jerry Boylan caused the deaths of 33 passengers and one crewmember “by his misconduct, negligence, and inattention to his duties.”

The 67-year-old was the captain aboard Conception when it caught fire during a Labor Day weekend dive trip in 2019 while anchored near Santa Cruz Island. One crewmember and 33 passengers who had been sleeping below deck were killed in the blaze. Five crewmembers, including Boylan, escaped and survived..

The indictment, filed Dec. 1, alleges Boylan, as the captain and master of the vessel, “was responsible for the safety and security of the vessel, its crew, and its passengers.” The indictment alleges that Boylan caused the deaths “by his misconduct, negligence, and inattention to his duties.” The indictment cites three specific safety violations: failing to have a night watch or roving patrol, which was required by the Code of Federal Regulations (CFR) and for over 20 years was a requirement in the Conception’s Certificate of Inspection issued by the U.S. Coast Guard; failing to conduct sufficient fire drills, which are mandated in the CFR; and failing to conduct sufficient crew training, which was also required by the CFR.

“As a result of the alleged failures of Captain Boylan to follow well-established safety rules, a pleasant holiday dive trip turned into a hellish nightmare as passengers and one crew member found themselves trapped in a fiery bunkroom with no means of escape,” United States Attorney Nick Hanna said in a released statement. “The loss of life that day will forever impact the families of the 34 victims. With this indictment and our commitment to vigorously prosecute the case, we seek a small measure of justice for the victims and their loved ones.”

The indictment comes about two months after the National Transportation Safety Board (NTSB) released its investigation findings, probable cause determination, recommendations and draft final report. NTSB could not determine the exact cause of the fire due to the extent of the blaze and condition of the vessel. However, NTSB determined the probable cause to be the failure of Truth Aquatics Inc. – the vessel’s owner – to provide effective oversight of its vessel and crew member operations including requirements to ensure a roving patrol was maintained.

NTSB said the absence of the required roving patrol delayed detection of the fire, allowed it to grow and directly led to the high number of fatalities.

The report also critiqued USCG inspections and rules and called for USCG to change regulations to require all vessels with overnight accommodations to have interconnected smoke detectors in all passenger areas and require a secondary means of escape into a different space than the primary exit. The NTSB also called on USCG to develop and implement an inspection program to verify that roving patrols are conducted – as required – for the safety of sleeping passengers and crew.

USCG has not implemented changes to the federal regulations or design criteria for small passenger vessels at this time. The USCG’s own investigation into the deadly fire is still ongoing.

“The Coast Guard will carefully consider the National Transportation Safety Board’s recommendations through a deliberate process, which will include review by all subject matter experts and senior leaders responsible for implementing the potential regulatory changes,” USCG Media Relations CWO Kurt Fredrickson said in an email.

Meanwhile, legislation called the Small Passenger Vessel Safety Act, which would require the USCG to modernize and update its regulation of escape hatches, batteries, smoke detectors, and night watch check-ins, is making its way through Congress.

As for owners of the Conception, Glen and Dana Fritzler of Truth Aquatics, lawsuits were brought against them by one crewmember, who was injured while escaping the fire, and several family members of the deceased. The Fritzlers had filed for protection from lawsuits under an 1851 law known as the Limitation of Liability Act. The law limits any compensation sought by survivors of the victims to the value of the ship’s remains. Since the Conception burned to its waterline and sank, its value was zero.

On Oct. 1, 2019, Truth Aquatics officially suspended all operations of their fleet, saying “we feel it’s important dedicate our entire efforts to make our boat models of new regulations that we will continue to work on with the NTSB and Coast Guard.”