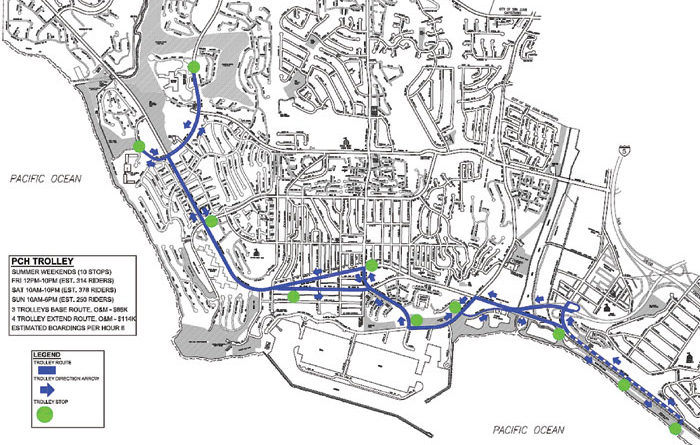 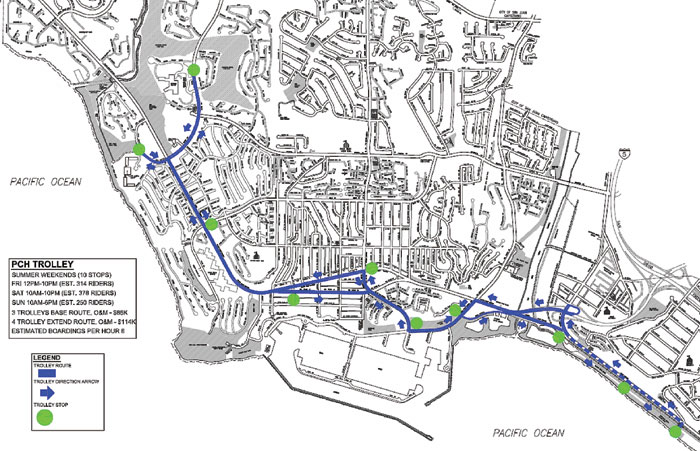 DANA POINT — Getting to and from the harbor may get a lot easier for visitors if a new trolley system is launched as planned, beginning operation in Summer 2014.

The funding opportunity is part of OCTA’s Project V, designed to provide funding for cities to develop local community transportation. Under the program, OCTA Project V would pay for 90 percent of infrastructure, operation and maintenance costs, to a maximum of $525,000 annually per city for five years, with a likely extension. Government agencies will pay for marketing, and each city must maintain a minimum of 10 boarding stops.

“Project V will allow us to provide visitor-serving transit, which is really what we need in the city of Dana Point,” said Brad Fowler, director of public works and engineering for Dana Point.

As proposed, the Dana Point Pacific Coast Highway (PCH) trolley would run on summer weekends, and a harbor parking shuttle would also run on summer weekends. A year-round shuttle is planned to operate during major citywide events. City staff members hope to offer the transportation free of charge.

City Manager Doug Chotkevys explained that staff members have been working on the concept for a while, beginning seven to eight years ago, when talks of establishing a tri-city trolley system for San Clemente, San Juan Capistrano and Dana Point arose. The tri-city system plan never materialized, leaving Dana Point to go in another direction.

Fowler has been working with OC Dana Point Harbor director Brad Gross to come up with a trolley system to help get people around town, Chotkevys said.

“I am really proud of what Brad (Fowler) put together,” he said.

There will be various routes for shuttle and trolley riders during summer weekends and busy event weekends. The Dana Point PCH trolley would shuttle visitors to the harbor on summer weekends — from the last week of June through Labor Day weekend.

The summer shuttle would carry riders from Dana Hills High School to the harbor on summer weekends and a special event shuttle would transport people from the high school to special events and festivals held in the city and harbor throughout the year — including the Tall Ship Festival, the Turkey Trot, the Festival of Whales and the Dana Point Boat Show.

Shuttle and trolley services are planned to operate on a 15-minute schedule.

Proposed routes for the Dana Point PCH trolley will run from Beach Road to Pacific Coast Highway and to the St. Regis Monarch Beach Resort, also stopping at the harbor, the state park entrance and the DoubleTree Hotel. The summer weekend shuttle would run from Dana Hills High School to the harbor.

“I think this is fantastic,” Miller said. “This is our best shot at getting a shuttle, and I think it’s a great concept. I think it’s feasible, it’s cost-worthy and something we should pursue.”

City Councilmember Scott Schoeffel agreed, saying “It is going to be a very good thing for residents, our businesses and visitors. I’m very excited about it.”

OCTA is expected to make a decision on the city’s proposal this summer.