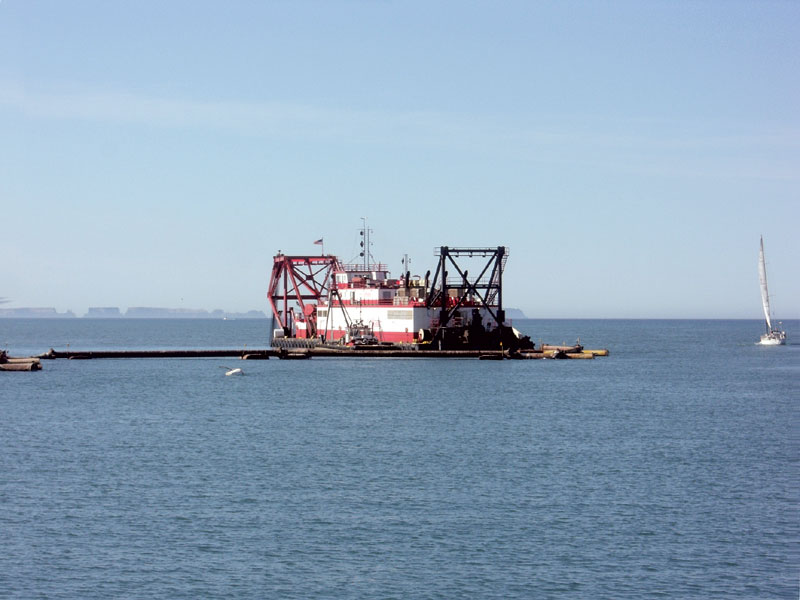 VENTURA — Due to the rising cost of dredging, the Ventura Port District has already had to make up a shortfall of $1.5 million to support annual dredging needs this year — money that was supposed to come from the federal government.

“As a small entity with limited budgets, it’s a hardship for the port district to have to fund a federal project,” explained Oscar Pena, general manager for the Ventura Port District, which oversees harbor operations. “But the sand trap was at capacity, and performing an emergency dredging was critical if we are to maintain safe and navigable harbor.”

Pena explained that the costs for just mobilizing dredging equipment have nearly doubled in recent years, from $700,000 to $1.2 million. Federal funding approved for the entire project to dredge the entrance, the sand trap — a sand collection basin — and the main channel was $2.749 million, which left a project shortfall of more than $1.5 million.

Shortly after this year’s emergency dredging of the sand trap, Pena discovered that President Barack Obama’s proposed federal budget for 2013 does not include any funds for the continued annual dredging of the harbor.

“This came as a complete surprise to us and to the Army Corps of Engineers, to have received no appropriations for funding the annual project,” Pena said.

In 1968, Ventura Harbor became a congressionally authorized harbor to receive federal funds for annual dredging operations. Not all harbors are congressionally authorized and do not receive funding for dredging. However, Ventura Harbor requires annual dredging of the entrance and sand trap, due to the high accumulation of material collected there.

“This potential negative economic effect for the local economy — and everyone who relies on the harbor — is huge,” Pena said.

“We are homeport to a large commercial fishery,” he explained. “Channel Islands National Park, which receives 300,000 visitors annually, is based here, and so are their vessels. Island Packers Co., which ferries about 60,000 passengers to the islands each year, is here. We have 1,500 boat slips in the harbor and 300 more in the adjoining residential development the Ventura Keys. All harbor users rely on a safe harbor.”

Ventura’s 75-vessel commercial fishing fleet and 35 squid purse seine vessels depend on safe navigation of Ventura’s port entrance to offload their daily catches. In 2010, NOAA placed Ventura County in the top 10 of commercial fisheries ports in the US.

In 2011, the offload, processing, wholesale distribution, export and retail chain value of the commercial fishery amounted to a whopping $107 million that streamed into the regional economy.

In March, Pena and his staff members visited the offices of their representatives in Washington, D.C. — Sen. Dianne Feinstein, who heads the Appropriations Committee; Sen. Barbara Boxer and Rep. Lois Capps — asking for their help with procuring the needed funding for 2013. The port district asked for $5.9 million for fiscal year 2013 and reimbursement of the $1.5 million they expended to cover the federal funding shortfall for the emergency dredging of the sand trap.

“We have to uphold the promise to all vessel operators to maintain a safe and navigable harbor,” Pena said. “To shut the harbor down would cause a disastrous economic impact that would not only be felt locally, but statewide.”

Pena called for boaters to write or call their senators and congressional representatives and ask for their support for the Ventura Port District to receive federal funding for essential Ventura Harbor dredging.