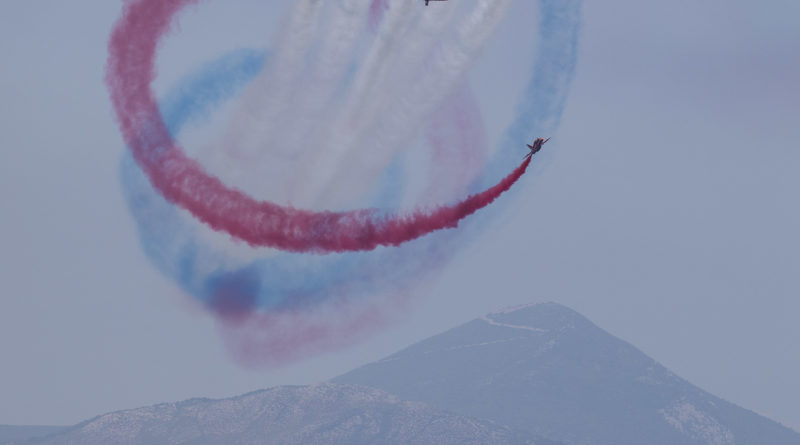 Boaters will be able to watch the Great Pacific Airshow in Huntington Beach, Oct. 4-6 from aboard their vessels.

HUNTINGTON BEACH—Those on the water during the Great Pacific Airshow in Huntington Beach will get a front row seat to the action.

The fourth edition of the free show takes to the skies, Oct. 4-6, with performances from noon-4 p.m. daily. This year’s show features the Canadian Forces Snowbirds, the Royal Air Force Red Arrows, U-S Air Force F-35 Lightning-2 demo, F-18 Super Hornet, plus a host of world-class performers. It will also feature a historic JetPack Aviation performance with two Jetpack pilots. Never before have two Jetpack pilots performed together in an air show, according to operators of the Great Pacific Airshow.

Boaters will be able to watch the action on the water. The Great Pacific Airshow website states that in 2017 there were thousands of boats in a floating air show city with premier views. According to the event website, boaters should know that between noon and 4 p.m. the air show will institute what is called a sterile aerobatic box in the water, which will be marked with buoys. The U.S. Coast Guard and lifeguards on jet skis will be monitoring the area. Boaters should refer to the Coast Guard notice to mariners for further location information.

Those wanting to catch the action from the water can also hop on a luxury yacht with Prince Charters. The yacht will depart from the public dock at 3821 Warner Avenue in Huntington Harbour at 9:30 a.m. and return at 5:30 p.m. Tickets are available for all three days and cost $250. Lunch, water and soft drinks are included. Visit bit.ly/2KYwnhj for more information.

Cruise Newport Beach is also offering tickets to watch the show from the water. The cruise departs at 11 a.m. from Newport Beach and lasts about six hours. Tickets are available for all three days and cost $40 for adults. Visit bit.ly/2PgB9eb for more information.

Spectators watching from the land can grab a spot on the beach and watch for free. The Great Pacific Airshow has several premium ticket options for those who want guaranteed front row seats and extra perks, which are on sale and can be purchased at pacificairshow.com/tgpatickets. The show center is located on the beach across from the Waterfront Hilton, with an aerial performance box of more than one mile long.

Those who are driving are advised to be prepared for traffic delays. Last year’s event attracted more than two million people during the three-day span.